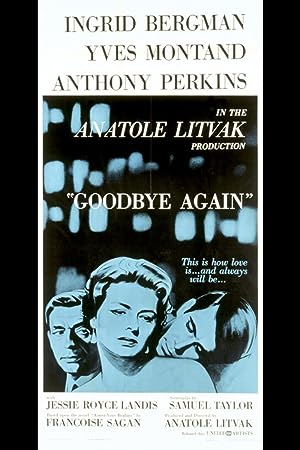 (50)7.02h7+
Ingrid Bergman is astonishing in her role as a fortyish Parisian woman whose despair over an unfaithful lover (Yves Montand) sends her into the arms of a much younger -- and very unstable -- man (Anthony Perkins). In HD.

PegCotReviewed in the United States on August 11, 2013
5.0 out of 5 stars
Classic Story
Verified purchase
This is the classic story of a professional, smart woman whose love for a philandering man leaves her feeling helpless and at his mercy. Beautifully acted by Ingrid Bergman and Yves Montand. Anthony Perkins plays the immature rich young man who falls in love with her and tries to make her fall in love with him, and he succeeds to a certain point, but to no avail in the end. Even though this movie may be dated, the story line is not, and I couldn't take my eyes off the screen. It's beautifully shot and very classy -- something that's hard to find in movies today. I recommend reading Francoise Sagan's book, Aimez Vous Brahms, which this movie is based on. The book is a classic as well!
5 people found this helpful

KonaReviewed in the United States on April 29, 2004
5.0 out of 5 stars
From Paris, with love
Verified purchase
Put on your pjs, make the popcorn, and settle back for one superb chick-flick! Ingrid Bergman stars as a sophisticated Parisian who has had an "understanding" with Yves Montand for five years. The understanding is she's madly in love with and faithful to him; he's free to date other women and see her when it's convenient. Enter Anthony Perkins as a rich, spoiled young man who falls head over heels for Ingrid. She's flattered, but she's forty; should she stop waiting for Yves and start a relationship with this twenty-five year old?

This film whisks you away to another time in the movies, when ladies always wore gloves, men always wore suits or tuxedos, and everyone smoked (glamorously). It's hard to take your eyes off Ingrid Bergman. She is stunningly beautiful and a consummate actress. Your eyes, however, will most definitely be drawn to the gorgeous Mr. Montand, who plays the amorous cad with such aplomb. Anthony Perkins' character is a needy, immature, almost creepy stalker. It's an unusual performance. The film is based on Françoise Sagan's Aimez-vous Brahms? and the rich and romantic sounds of Brahms' Symphony No. 3 in F add to the drama.

I heartily recommend Goodbye Again to those who enjoy films with romance, heartbreak, and beautiful music.

Murshed AlamahmedReviewed in the United States on August 14, 2015
3.0 out of 5 stars
REVIEW OF "GOODBYE AGAIN" 2015 KOREAN MADE DVD
Verified purchase
REVIEW OF “GOODBYE AGAIN” 2015
I was disappointed by the 2015 Korean product. It was deeply flawed. The German language version came up. I went to the English version. It was grainy, out of focus and the technical execution was way below standard. I could not get rid of the Korean subtitles. It is different from the 1961 VHS video. I loved the French version.

Philip (Anthony Perkins), is at first interested when he meets Paula at his mother’s house-- she is going to arrange the redecoration of the place. He gives her a lift back to her shop, and we can see the interest developing into something deeper. As he says to his boss’s secretary, when he finally arrives at work, “I met someone today.” “I know,” she replies, “The most beautiful girl in the world.” “No-- a woman-- warm, charming-- and yet sad. There was a deep sadness in her eyes.”

Missing is: At one point, Paula asks: “Has time caught up with me already?”
That remark strikes a chord, even from where I sit with my contemporary sensibilities… Beauty and youth, as the measure of a woman…

Scenes that were edited include: Eventually the young man’s insistence makes itself felt. Given the neglect Paula feels in her relationship with Roger, she succumbs to Philip’s charms. Bergman gives us a glorious moment as she is lying in bed the morning after sleeping with Philip for the first time – her expression is one of tenderness, regret, pleasure, worry – so many emotions – each fleeting but deeply felt. This important scene was missing.

At the concert attended by Paula and Philip midway through the film, an orchestra is heard performing the final movement of Brahms’s Symphony No. 1 prior to intermission and the third movement of his Symphony No. 3 after the interval. (It is somewhat unrealistic that Paula and Philip are shown rushing back to the concert upon hearing the signal that the second half of the concert is about to begin, only to arrive at the back of the hall to hear music that comes more than 20 minutes into the symphony.) In contrast to the sunny optimism of the Symphony No. 1 finale (matched by the mood of the film’s main characters during the opening half of the concert), the melancholy theme of the “Poco Allegretto” from the Third Symphony reflects the sudden tension between them following an uncomfortable conversation during the intermission in which Philip forces Paula to question her relationship with Roger.
What else was missing? The French theme song, with the French lyrics, is translated as "When You Are Sleeping Near Me". The song's lyrics explain: "Sometimes in your sleep you murmur his name, the name you've never forgotten. I feel alone even when I'm sleeping with you now. Someday, if you hear this song, remember me, my beloved."

When the film was made in 1961, Bergman was 45, Perkins was 29, and Montand was 40, though he appears older than Bergman. In her role as Paula, the established and respected decorator is well aware of her lover’s philandering – at one point he says “this is who I am” – and she doesn’t expect him to change. She looks the other way as long has he is discreet.

This arrangement isn’t so striking to me, but what I do find striking?

50 years later we still turn a blind eye for men, still think nothing of men sleeping with women 20 or more years younger, yet we raise an eyebrow when a woman does the same – or anything close.

When Paula begins seeing the younger man, the son of one of her wealthy clients, Roger is incensed. When they discuss the situation and she refers to his many “girls” in order to put her actions into context, his response is maddening (to our 21st century sensibilities). He replies “at least that’s normal.”
Ouch!
6 people found this helpful

TomReviewed in the United States on September 14, 2012
5.0 out of 5 stars
Goodbye Again Excellent Film
Verified purchase
Goodbye again has been a favorite of mine since High School. Had the video for years and so happy I now have a DVD copy.
Ingrid Bergman,Yves Montand and Anthony Perkins have never been better in their roles of 3 way lovers. The soundtrack is wonderful carring along the movie to great hights. A film to watch many times and still be moved...great acting, story telling and music hard to find in movie today.
7 people found this helpful

Elie CastielReviewed in the United States on July 3, 2010
5.0 out of 5 stars
Classic Film
Verified purchase
Rare film, never released in the US. Bought French and/or Russian subtitles version. Excellent dubbing. It is a pity that today superficial films are being released on DVD/Bluray and real classics remain forgotten. This has to do most probably with copyright laws, but from a marketing point of view, to the fact that public taste has tremendously changed in the last thirty years. Superficiality and below-the-belt humor is nowaddays the name of the game. Heroes in today's cinema are often 15 years old. This simply does not make sense. What a relieve to see this mature film.
From an artistic point of view, good shots, excellent acting, beautiful black & White cinematography, and stylish narrative.
3 people found this helpful

Daniel FontaineReviewed in the United States on January 12, 2018
5.0 out of 5 stars
Five Stars
Verified purchase
Wonderful
One person found this helpful

Willard M. PayneReviewed in the United States on February 3, 2013
5.0 out of 5 stars
Telling
Verified purchase
I actually believe the author, Francois Sagan, daughter of a French industrialist was actually describing the kind, type of people who actually exist, people she actually observed in real life. Sensational character studies.
7 people found this helpful

Edith F. HurwitzReviewed in the United States on February 26, 2008
4.0 out of 5 stars
middle aaged women and love
Verified purchase
ingrid at her best in a very confusing situation . she has a long lived boyfrience of middle age sho sees young women on the side. She is in denial about it until a young manTony Perkins is in pursdit. H ow she handles the situaion is bergman at her best Thepictureis shot inParis so there are great scenes of the cityu. Yves Montan as the dispicable frenchman and Tony Perkins as the good looking American give the film its interest.
2 people found this helpful
See all reviews
Back to top
Get to Know Us
Make Money with Us
Amazon Payment Products
Let Us Help You
EnglishChoose a language for shopping. United StatesChoose a country/region for shopping.
© 1996-2021, Amazon.com, Inc. or its affiliates