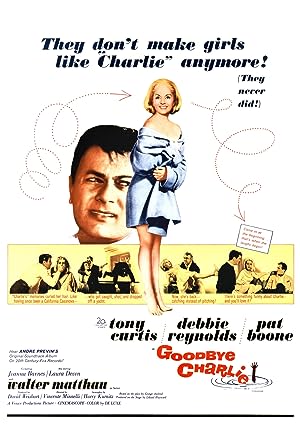 KEstyloReviewed in the United States on April 7, 2020
2.0 out of 5 stars
Goodbye Charlie is panned and scanned from a video
Verified purchase
I rented "Goodbye Charlie" from Amazon because the New Yorker magazine recommended it. However this was shot as a Cinemascope movie. The print was soft as if duped from an old video and panned and scanned. Only the credits were in Cinemascope. Amazon should state that the rental was created from a print version formatted for old school television viewing. Even DVDs give us the information as to whether its widescreen, remastered etc. Amazon should seek out these good copies of old films before offering or charging for them.
I will think twice before renting a movie from Amazon again, as they do not disclose the type of information ANY movie buff id used to seeing. I'm writing the New Yorker about this too! Shame on Amazon!
19 people found this helpful

CHLReviewed in the United States on April 27, 2020
1.0 out of 5 stars
DON'T BUY THIS! It's As Bad a DVD As I Have Ever Seen
Verified purchase
This DVD version of the fine movie Goodbye Charlie is virtually unwatchable. On my widescreen TV the picture from the DVD was surrounded on all sides by wide black bands. The quality of this small picture was more like VHS than DVD. That is, the picture quality was VERY bad. If you buy this version expecting DVD quality, you WILL be as badly disappointed as I was.
13 people found this helpful

KathieReviewed in the United States on December 14, 2019
3.0 out of 5 stars
1960's stereo types, but a funny, quirky movie nonetheless.
Verified purchase
I remembered this movie from my early teen years about a man who is murdered and returns into the body of a woman (Debbie Reynolds). It also stars Tony Curtis as Charlie's best friend. Due to the times when this movie was made, there are a number of stereotypes that were acceptable during the 1960's that are outmoded (I would hope) about 60 years later. Many frequent references are made about the physical differences between men and women, with many ongoing comments about the physical attributes of each; considering the times, this was to be expected. However, I couldn't help but notice that, in their conversations, men were referred to as "men" when women were referred to as "girls". In this day and age, I would hope that others would be as aware of it as I was. Women were dressed in somewhat revealing clothes with the hair styles and make up of the mid 1960's, generic rock n roll music and other things that may elicit a muffled groan as many of us remember when the main focus seemed to be men "chasing" as many women as possible, consequences and morals be damned; it also touched upon "Charlie", the poor soul who was reincarnated as a lovely woman and who actually had to address the fact that the males of the species (some of whom he'd known as friends in his previous life) couldn't wait to have an affair with him (as a woman) and how this affected him. He also became more aware of how his supposed friends actually felt about him, as evidenced by the lack of attendance at his funeral service when they all kept coming up with excuses as to why they couldn't attend. There are plot twists towards the end of the movie, which help lend interest and hope to male/female relationships of the "future" (although the past few years have seen an all too common thread that some things are slower to change than others). An interesting movie to watch with same gender friends to hopefully garner some interesting (and honest?) feedback and discoveries about how associates really feel about the opposite sex. Try to remember, lastly, that this is a "light hearted comedy" and that this should be considered when watching this movie.
2 people found this helpful

Anthony MarinelliReviewed in the United States on June 8, 2013
4.0 out of 5 stars
fun movie flows easily
Verified purchase
When I watch a movie and its almost 2 hours long there's much thats filled in along the way and does the thing have life are there gaps which bore scenes that seem like they should be there, that fill the deleted bonus parts of dvd features, and does it move salong. This one does? Its a atrange film, since many people dont like it and many sware its very good love or hate i happen to enjoy it, like many of the comments i read I recall it! Of all the films wew may have seen 30 plus years ago how many can you recall..it seems like a piece of fluff..the plays is short they say and hes been inventive and play like has added some thought to it, an egyptian book, reincarnation makes you wonder throughout about this or that, and doesnt stay at the low end of life but gives the actress in this case debie reynolds something to do with this part and she comes off better than tony? A cuckold of sorts is shot who comes back as a woman(previously a man) and much humour is built up into the largely dialogue, and its kept fairly interesting and the lead moves it on and garners are interest..is life as enjoyable as a woman or a man..from a character who's been both..as she tries to make the world disappear to discover where she wants to be..novels, booze and what have you..thats a joke? So many people recall this film,scenes, episodes, dialogue, old books, and its really a debbie reynolds film as its written up for her as its subject..and thats why we recall it since here, she seems to relish the role..I recall it always being on TV. Tony curtis during the 60's turned into and i wont say developed an actor of sex type films, and he was a serious actor, and he recalls Houdini from his youth..and he just couldnt find the write roles..not even a few..changing agents..or what was going on..went to europe..youn gpersons today view Houdini and get into it..as I do..one wrong film even ifits a success can turn you this way or that..but at times its hard to figure..I had a lot of fun here..like the perennial viewers of this film
One person found this helpful

V. Risoli-BlackReviewed in the United States on June 29, 2013
5.0 out of 5 stars
Great Film Should Be Seen
Verified purchase
Vincente Minnelli's 1965 comedy based on the great George Axelrod's stage play, "Goodbye Charlie" is one of the first really certain gender-bender via reincarnation sex comedies that Hollywood has ever produced. Starring Tony Curtis and Debbie Reynolds and Pat Boone (in a lesser role although given star billing) and co-starring Joanna Barnes, Ellen (MacRae) Burstyn, Laura Devon, Martin Gabel, Roger Carmel, Walter Matthau (and featuring Donna Michelle, a playboy playmate who is seen dancing in the film's opening segment with one of the most exciting twist parties put to film). This anecdote leads me to mention the score and songs by Andre Previn (and Dory Langdon (the future Dory Previn?) certainly some of the most unusual ever written directly for the screen. This was Boone's last daring role. Had he not seen it for more than a sixties sex comedy with a gender bender gimmick, he may not have made the film at all, although his part is still rather virginal. Despite the controversy over 20th Century-Fox's decision to provide pan and scan treatment to its Cinemascope widescreen product (remember, the masses of the movie-going public must all be considered), "Goodbye Charlie," after a long wait from its full screen VHS presentation, has been dumped into the studio's MOD enterprise, Cinema Archives for a pricey cost. Color by Deluxe looks beautiful as does the film, which if you've never seen it, do not let anything stop you. Entertaining romp. Just go figure, goodbye!
8 people found this helpful

George MoffattReviewed in the United States on April 28, 2013
1.0 out of 5 stars
GOOD MOVIE, ALL FOXED UP !!!
Verified purchase
These people are just too busy to read the bad press they are getting for their awful releases of once widescreen movies. They just did it again with GOODBYE CHARLIE. Saturday night, I`m seated and push de button and get "This movie has been modified to fit your television screen". Really ? Do they really know my size ? I didn`t ask for a modification. I HATE modifications !!!
This small CINEMASCOPE picture comes on and I get to see the credits. That then turns to a grainy, cropped and crappy picture. I took it off and will be mailing it back first thing Monday morning. Beware of CINEMA ARCHIVES for they know not what they do.
50 people found this helpful

Rocko3Reviewed in the United States on June 27, 2019
4.0 out of 5 stars
This is a classic from the sixties, starring the top actors of the day...........
Verified purchase
I went with a friend to see this movie in the theater when it came out. I was actually wearing a red and white checkered shirt if that tells you my age. I was pretty young, not sure how I got in. Anyway, the girl dancing during the opening scene was pretty fantastic at the time. I kept hoping her top would fall out of her dress. No such luck!!! Anyway, the movie is a super cute comedy from back in the day. The humor is a little dry, but the story line is really a take off from the sixties Mod era. Give it a watch...young or old, just to catch a real classic.

BwhamiReviewed in the United States on November 29, 2014
5.0 out of 5 stars
Good by Charlie
Verified purchase
The movie opens with Charlie being shot and falling into the ocean. Tony Curtis comes to LA to attend Charlie's Funeral and then someone brings an almost amnesiac Debbie Reynolds to Charlie's house. Womanizing Charlie has come back to earth as a woman. As a woman Charlie decides to blackmail the women he slept with and make some money. As a comedy this movie is funny and enjoyable. Debbie Reynolds does a great job of being a man in a woman's body. She sits like a man, walks like a man and acts like a man. Pat Boone thinks he loves the woman who was Charlie and tries to court her. Tony Curtis tries to keep up with every thing going on and starts to fall behind. It is a light comedy that I waited a long time for it come out on DVD. I recommend this movie.
3 people found this helpful
See all reviews
Back to top
Get to Know Us
Make Money with Us
Amazon Payment Products
Let Us Help You
EnglishChoose a language for shopping. United StatesChoose a country/region for shopping.
© 1996-2021, Amazon.com, Inc. or its affiliates