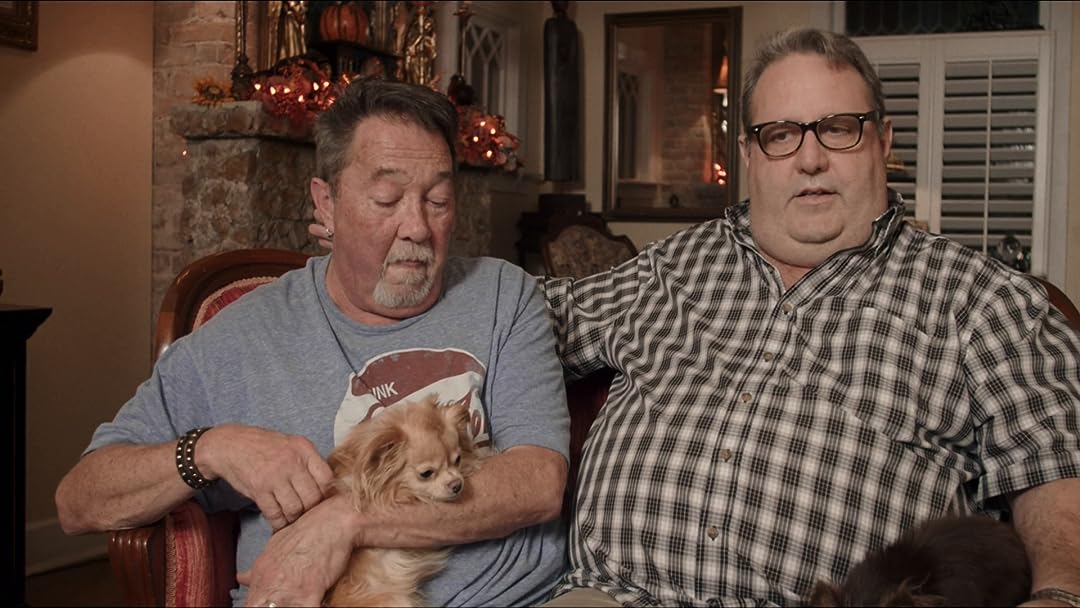 The Gospel of Eureka

(37)
1 h 13 min201916+
Welcome to Eureka Springs, Arkansas, a one-of-a-kind oasis in the Ozarks where Christian piety rubs shoulders with a thriving queer community.

Susan ReavesReviewed in the United States on October 5, 2021
5.0 out of 5 stars
Loved it
Verified purchase
Well then. I felt like I was watching a parallel universe. I've always lived on the West Coast (California/Oregon) but my mom's origins were in Louisiana. I'm no stranger to Christian Culture and no stranger to the drag queen gay bar scene either. The juxtiposition of the daily passion play with the drag bar scenes was certainly something else with all the drag queens singing hymns or religion based songs in full drag while the patrons tipped them and danced. Lordy. (No pun intended! LOL) The gay couple who were interviewed, who owned the bar and had Christian backgrounds, themselves, was moving and thoughtful.

Overall, the whole darn thing was rather mind blowing to have all those folks living in such a small southern town and getting along just fine. The town is quite lovely. I'd love to visit, if only I weren't a couch potato in Oregon, born one year after one of the fellas interviewed, whom the film was dedicated to.

A great documentary. My husband loved it too.

AxleoflightReviewed in the United States on January 7, 2022
2.0 out of 5 stars
Pretty bad. Poor narrative, little to nothing tying the various scenes together.
Verified purchase
Like I said, this 'documentary' didn't have a lot going for it. It had little vignettes about church life and LGBT life in a Ozark city, but little to nothing tying it together. The juxtaposition between the Passion play and the drag show could have been interesting, but any individual that talked about one didn't talk about the other. At some points I wondered if the creators had a purpose in mind beyond 'both these things exist in a a rural city; isn't that weird?'. This would have been massively improved had they asked people on their opinions on both of these things instead of one or the other.

What's more, the narration was way out of place. It felt like it was trying to be spooky and mysterious in a planter class southern accent, alluding to events such as magical springs, lynchings, the klan, and other such elements, but these were never represented or discussed in the film. The accent was overdone, out of place (Eureka is in the Ozarks), and provided no context to either the preceding or subsequent scene.

123 gin-benReviewed in the United States on August 28, 2019
5.0 out of 5 stars
Great story
Verified purchase
Wonderful true story of an amazing little town that's residents have found a way to co-exist peacefully. It is a wonderful little town that welcomes everyone! And where else can you see the resurrection of Christ and a wonderful drag show in the same night?
5 people found this helpful

cyclingmaryReviewed in the United States on September 4, 2019
3.0 out of 5 stars
More to Eureka than this tells
Verified purchase
I live very near Eureka. It is an extremely interesting little town. There is so much more to it than this video tells but what it tells is true! Visit Eureka Springs and decide for yourself.
4 people found this helpful

EJAReviewed in the United States on May 10, 2020
1.0 out of 5 stars
Stop the indoctrination
Verified purchase
I am tired of big tech trying to indoctrinate people into thinking a certain way about a subject in every form. Homosexuality has been on earth since the beginning of time in one form or another. Get over yourselves. Those of us who have not chosen the homosexual lifestyle don't want to know about it.
2 people found this helpful

ThomasReviewed in the United States on January 11, 2020
5.0 out of 5 stars
Driving through town you know there is something just a little different, but lovely!
Verified purchase
I've been going through that town for quite some time...my whole adult life and I could tell that things are quaint and different. I always had felt a huge sense of community there! This film really paints a unique and beautiful picture of what is going on and the lifestyles that are present there! I love the shops around downtown, always a great place to catch up with age-old friends and something.

I'll cherish this town, even more, the next time I come up! Thank you for hosting this wonderful piece of Americana.
2 people found this helpful

JustinReviewed in the United States on May 12, 2019
5.0 out of 5 stars
Fair, unbiased portrayal of how life should be across the world.
Verified purchase
This is an absolutely fabulous documentary! Filmed in my home state & in our favorite quaint little getaway town to the north of us. It is well presented, high quality, emotional, funny, sad...totally worth purchasing. We have watched it probably 10 times already..(we've just had it about a month).
6 people found this helpful

Savy Florida BuyerReviewed in the United States on March 18, 2022
5.0 out of 5 stars
The Gospel of Eureka
Verified purchase
After seeing this ground breaking documentary on a cable station it was obvious this should be in my library.
See all reviews
Back to top
Get to Know Us
Make Money with Us
Amazon Payment Products
Let Us Help You
EnglishChoose a language for shopping. United StatesChoose a country/region for shopping.
© 1996-2022, Amazon.com, Inc. or its affiliates