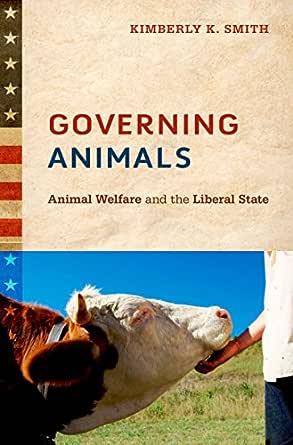 Flip to back Flip to front
Audible Sample Playing... Paused   You are listening to a sample of the Audible narration for this Kindle book.
Learn more
ISBN-13: 978-0199895755
ISBN-10: 0199895759
Why is ISBN important?
ISBN
This bar-code number lets you verify that you're getting exactly the right version or edition of a book. The 13-digit and 10-digit formats both work.


"In this book the distinguished political theorist and scholar of social movements Kim Smith turns her attention to animals and how they are, can be, and should be governed in a liberal state. Integrating a wide range of materials, Smith provides an alternative history of the animal protection movement and articulates a distinctive vision for its future."--Dale Jamieson, Director of Environmental Studies and Professor of Philosophy, New York University

"Governing Animals is a smart, readable entry in the growing literature on animals and politics making a political argument for animal welfare. Highly recommended."-- CHOICE

"Zoopolis (OUP) and Governing Animals are both worthwhile exercises of political theory. They raise interesting questions, seek to fill important gaps in our theoretical frames, and advance our conceptions especially in the realm of liberal political thought. They will therefore be of interest at least to scholars who study political theory, moral philosophy, and law. Both works will also be of interest to those beyond the academy. Both are well written, and, while academic and theoretical in orientation, they are readable and accessible." --Tulsa Law Review

5.0 out of 5 stars
5 out of 5
1 customer rating
How does Amazon calculate star ratings?
Amazon calculates a product’s star ratings based on a machine learned model instead of a raw data average. The model takes into account factors including the age of a rating, whether the ratings are from verified purchasers, and factors that establish reviewer trustworthiness.
Top Reviews

bardahl
5.0 out of 5 stars _Governing_Animals_ by Kimberly K. Smith
Reviewed in the United States on June 24, 2013
Verified Purchase
Dr. Smith analyzes the extent of legitimate authority that governments in the United States possess to regulate how human beings treat animals. Her analysis involves scholarly perspectives in the fields of political philosophy and law and about the political facts of life. Dr. Smith acknowledges that laws about animals will be ineffective if they are contrary to society's interpretation of what the human/animal relationship is supposed to be. Animal-welfare advocates will need to rely on social structures first, rather than on government coercion, to effect humanitarian reform, she explains.
Read more
Helpful
Comment Report abuse
See all reviews from the United States