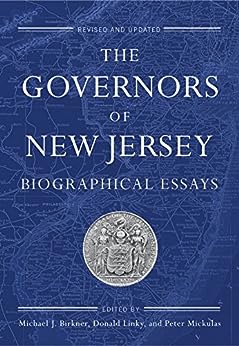 Rogues, aristocrats, and a future U.S. president. These and other governors are portrayed in this revised and updated edition of the classic reference work on the chief executives of New Jersey. Editors Michael J. Birkner, Donald Linky, and Peter Mickulas present new essays on the governors of the last three decades—Brendan T. Byrne, Thomas Kean, James Florio, Christine Todd Whitman, Donald DiFrancesco, James McGreevey, Richard Codey, and Jon Corzine. The essays included in the original edition are amended, edited, and corrected as necessary in light of new and relevant scholarship.

The authors of each governor’s life story represent a roster of such notable scholars as Larry Gerlach, Stanley Katz, Arthur Link, and Clement Price, as well as many other experts on New Jersey history and politics. As a result, this revised edition is a thorough and current reference work on the New Jersey governorship—one of the strongest in the nation.

Also of Interest:
New Jersey Politics and Government
The Suburbs Come of Age
Fourth Edition
Barbara G. Salmore with Stephen A. Salmore
978-0-8135-6139-4   paper   $34.95
A volume in the Rivergate Regionals Collection

"One virtue of this carefully crafted, fact-laden compendium is that there aren't any rankings, making it even more appealing. An excellent introduction propels the reader into a thicket of politics, ambition, greed and even a few instances of pure public service."
― Star-Ledger

"The second edition updates an important reference on New Jersey's executive leaders. A well-constructed introduction shapes the book's thematic contours while its central thesis concerns the impact of New Jersey's shifting political realities on its gubernatorial leadership. Fifty-six scholars contribute concise but rich biographies of the 74 leaders who have held office. Supported by a comprehensive bibliography, this title remains an indispensable reference for Garden State political history. Highly recommended."
― Choice --This text refers to the hardcover edition.

MICHAEL J. BIRKNER is a professor of history and Benjamin Franklin Professor of Liberal Arts at Gettysburg College. He is the author or editor of twelve books, including McCormick of Rutgers: Scholar, Teacher, Public Historian; A Country Place No More: The Transformation of Bergenfield, New Jersey; and Samuel L. Southard: Jeffersonian Whig. He was a contributor to New Jersey: A History of the Garden State (Rutgers University Press).

DONALD LINKY has served as a visiting professor and senior policy fellow at the Eagleton Institute of Politics at Rutgers University and was counsel and director of policy and planning for Governor Brendan T. Byrne. He was the editor of The New Jersey Directory: The Insider Guide to New Jersey Leaders and a monthly columnist for New Jersey Reporter and New Jersey Business.

PETER MICKULAS is an editor at Rutgers University Press and the author of Britton’s Botanical Empire.

Joseph G. Bilby
5.0 out of 5 stars Five Stars
Reviewed in the United States on December 7, 2014
Verified Purchase
Great update of an already great book. An essential reference for those interested in NJ history.
Read more
Helpful
Report abuse
See all reviews
Back to top
Get to Know Us
Make Money with Us
Amazon Payment Products
Let Us Help You
EnglishChoose a language for shopping. United StatesChoose a country/region for shopping.
© 1996-2022, Amazon.com, Inc. or its affiliates