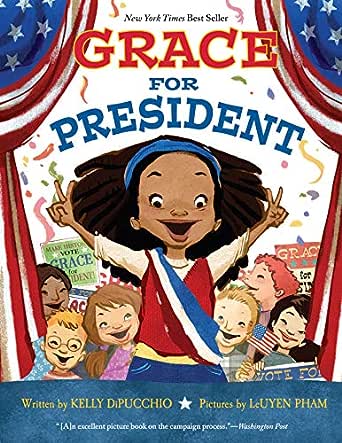 You've subscribed to Grace Series! We will preorder your items within 24 hours of when they become available. When new books are released, we'll charge your default payment method for the lowest price available during the pre-order period.
Update your device or payment method, cancel individual pre-orders or your subscription at
Your Memberships & Subscriptions 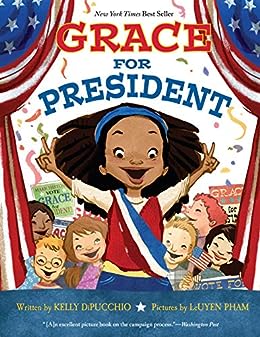 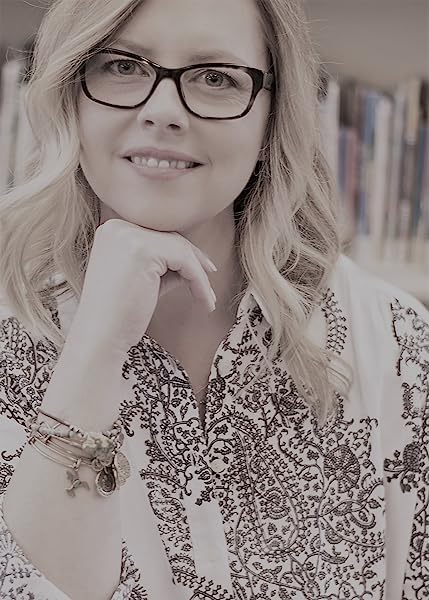 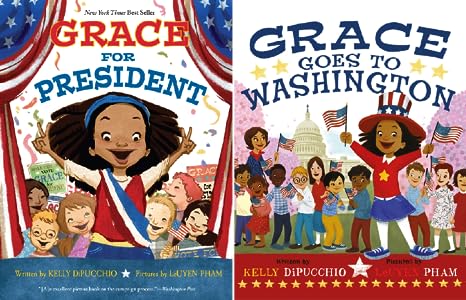 DiPucchio and Pham are game gals. Explaining the electoral system to adults isn’t easy, but  they make it understandable to kids. When Mrs. Barrington shows her class pictures of the presidents, energetic African American Grace asks, “Where are the girls?” Responding to Grace’s shock, Mrs. Barrington arranges for an election in which Grace runs against Tom, with each of the remaining students in the multiethnic class representing a state. It looks like popular Tom will win since the boys have the most electoral votes, so Tom just sits back while Grace advances campaign promises. When the votes are counted, Sam, representing Wyoming (where the first woman was elected to the House), throws the winning votes to Grace, because he “thought she was the best person for the job.”  The attractive paint-and-collage art captures the excitement of the race in layouts as diverse as the kids. However, there’s one big problem in the author’s note, which explains why individuals should vote even if they are not electing directly: “It’s those individual votes from regular people that add up to become the popular vote in each state.” The concept of larger versus smaller states isn’t really explained, leaving the idea that the winner of the popular vote will be president. As Al Gore knows, that’s not true. Grades 1-3. --Ilene Cooper --This text refers to an alternate kindle_edition edition.

LeUyen Pham (http://www.leuyenpham.com/) is the prolific and bestselling illustrator of many books for children, including Grace for President by Kelly DiPucchio, Freckleface Strawberry by Julianne Moore and God's Dream by Archbishop Desmond Tutu. Pham has also written and illustrated her own works, including All the Things I Love About You and Big Sister, Little Sister. A former animator for Dreamworks, she lives with her husband and two sons in San Francisco
--This text refers to an alternate kindle_edition edition.

"DiPucchio and Pham are game gals. Explaining the electoral system to adults isn't easy, but they make it understandable to kids."―Booklist

"...the book delivers lessons on electoral votes, polls, and the reason every vote counts."―The New York Times --This text refers to an alternate kindle_edition edition.

4.8 out of 5 stars
4.8 out of 5
353 global ratings
How are ratings calculated?
To calculate the overall star rating and percentage breakdown by star, we don’t use a simple average. Instead, our system considers things like how recent a review is and if the reviewer bought the item on Amazon. It also analyzes reviews to verify trustworthiness.
Top reviews

Shammi
5.0 out of 5 stars Great book!
Reviewed in the United States on June 12, 2019
Verified Purchase
This is one of our most favorite books in our home library. Got it for my three year old. The story is great and handles the issues of gender, race and democracy in such a easy to understand and poignant way. Explains the concept of electoral college better than anything I have ever read even for adults. Highly, highly recommend. One of my friends said she cried while reading it to her neice, because it was so sweet and touching. I would agree! Suitable for 3-7 year olds.
Read more
4 people found this helpful
Helpful
Comment Report abuse

LizP
5.0 out of 5 stars Grace for President
Reviewed in the United States on October 11, 2012
Verified Purchase
Grace For President. Written by Kelly DiPucchio. Illustrated by LeUyen Pham. Disney-Hyperion Books, revised edition 2012. 40 pages. Publisher recommends for ages 5-9. ISBN: 9781423139997.
In her classroom, Grace sees a poster of all the presidents of the United States and realizes not one of them is a woman. Grace announces to her class that she would like to be president of the United States. Her teacher suggests an election at Woodrow Wilson elementary school. No one else in the class wants to be president, which leads Grace to believe that becoming president will be easy. The next day, though, Grace's teacher announces that another class has also nominated a candidate to run in the election.

The next step is for each student to pick the name of a state out of a hat. One of the students asks what the number next to the name of the state means. In a couple of succinct paragraphs the teachers explain the electoral college. Adults hearing such an explanation for the first time might say "now wait a minute!" The kids accept it without question.

Grace and her rival, Thomas, run their campaigns by making promises and speeches. They make signs and Grace hands out cupcakes. In November, election day arrives and it's a nail biter.
The illustrations are fun, and they capture the atmosphere of the election. In one illustration, the boy who eventually decides the election is seen standing as part of the circle around one candidate but craning his neck to hear the other candidate.

Grace for President gives kids a sophisticated lesson about how a presidential election works. It's particularly strong on the electoral college. Because of this strength, adults reading the book to kids may also gain a clearer picture of the electoral college. But the wonderful thing about the form of Grace For President is that it's fun. It doesn't read like it's trying to teach kids anything.
Read more
9 people found this helpful
Helpful
Comment Report abuse

JLL
5.0 out of 5 stars Fantastic Book!
Reviewed in the United States on March 25, 2017
Verified Purchase
This book does a fantastic job of introducing kids to the concepts of elections, the electoral college, and how women have fit into that (or not) so far in the U.S.

It's a great book for kids to relate to and understand. It's fun and engaging while also educational. It even alludes to swing states and teaches an important lesson on voting for the best person.

It also has a great underlying lesson on how to persevere when someone laughs at your dream.
Read more
3 people found this helpful
Helpful
Comment Report abuse

Amazon Customer
5.0 out of 5 stars Enjoyable!
Reviewed in the United States on December 22, 2019
Verified Purchase
I used this book in my classroom during my government unit. My kids enjoyed it the storyline and it supported my unit’s overall objective. I would definitely recommend it as a read aloud for 3rd grade.
Read more
One person found this helpful
Helpful
Comment Report abuse

Tarrence Simmons
5.0 out of 5 stars Inspiring for girls!
Reviewed in the United States on February 21, 2019
Verified Purchase
Perfect for our daughters. Great way to introduce our girls to political science and leadership. This book is extremely inspiring and I wish I had something like this when I was a little girl. I read it to my 2 year old and surprisingly she’s engaged in the book by the beautiful pictures. This books shows how hard work and doing what’s needed when you’re passionate about something does NOT go unnoticed. Great book!
Read more
Helpful
Comment Report abuse

Rebecca Howarth
5.0 out of 5 stars Adorable and Informative
Reviewed in the United States on July 18, 2017
Verified Purchase
What a cute book! It simplifies a lot of the process but stays true, so kids can understand the electoral college, and there is a longer explainer int he back. Not a lot of detail about the various campaign strategies and platforms, but I guess that would make it quite a long book. The pictures are energetic and wonderful, with lots of details we'll go back to talk about every time we read the book.
Read more
2 people found this helpful
Helpful
Comment Report abuse

FSG
5.0 out of 5 stars Fun for kids learning about our election process & for inspiring them
Reviewed in the United States on November 10, 2012
Verified Purchase
I first discovered this book at our local library 4 years ago, with the 2008 presidential election. My daughter was almost four, so she was young for this book, but she loved it anyway & responded to the girl (Grace) going for her goal with integrity & making it. We read it repeatedly while we had it out for the weeks before the 2008 election. My daughter is now in 2nd grade, so we got it out about 2 months before the 2012 elections & read it again. Of course she could understand much more, and we could dig into the ideas in the book, what the kids in the book were doing to get their classmates to elect them, and we talked about what she was seeing in our community about what the 2012 election campaigns were doing to get people to vote for them. Very helpful! So she & I decided that her class at school would really like it, so we ordered it from Amazon & gave it as a present to her teacher, who was thrilled with it, both for the election connection & for the strongly positive girl role model. They read it in class & the kids really enjoyed it.
Read more
3 people found this helpful
Helpful
Comment Report abuse

Nai
5.0 out of 5 stars a 2016 birthday gift favorite
Reviewed in the United States on June 28, 2016
Verified Purchase
I've bought several copies of this for kids' birthday parties for 5/6/7 year olds. I also use it for project-based activity with older kids planning a project with younger children. I like some of the realities (girl works harder and takes nothing for granted), the toe in to the electoral college as a way to elect the president, and as a way to talk about our 2016 election it seems especially timely. Go, Grace, go!
Read more
2 people found this helpful
Helpful
Comment Report abuse
See all reviews

AJ
5.0 out of 5 stars Don't be a Princess, Be a President
Reviewed in India on April 24, 2016
Verified Purchase
My 10 year old niece is dictating this review.
I like this book because it explains how one can vote in America.
It shows than not only boys , but even girls can run for President.
I liked that Grace made her own candidate flags and spoke with honesty.
Every girl can do it!
Read more
Report abuse
See all reviews