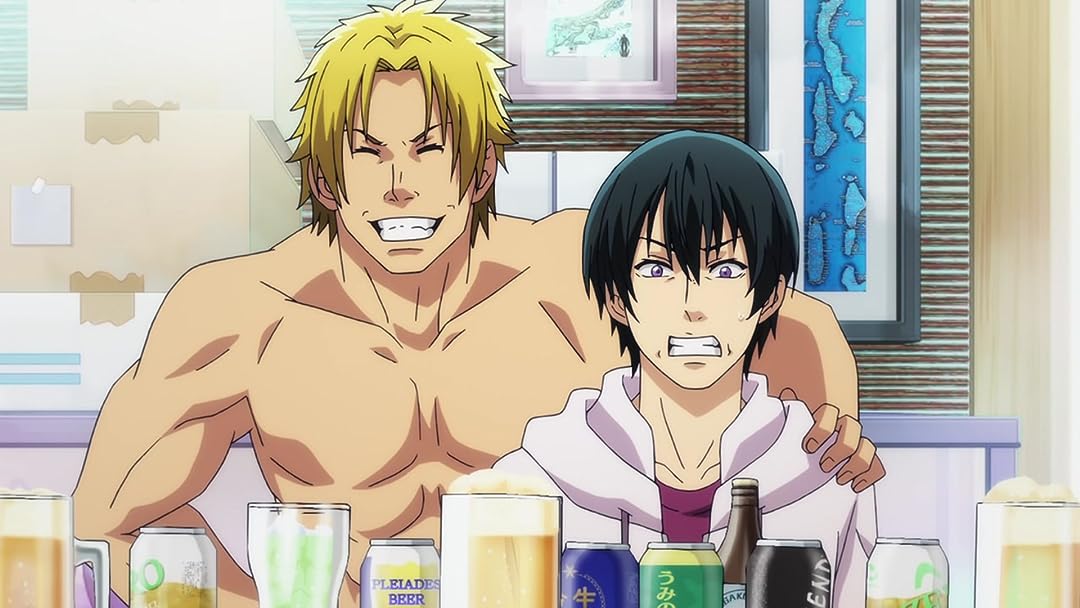 Season 1
(162)
2018TV-MA
When Iori Kitahara heads off to college, he decides to live at his uncle's dive shop in Izu named Grand Blue.Iori is looking forward to experiencing college life amidst the roar of the waves, the blazing sun, and his cute cousin who lives with him!However, Iori runs into a group of tough guys playing strip rock-paper-scissors, and ends up joining Peek-a-Boo, the college's diving club!

Alexander BanosReviewed in the United States on July 15, 2018
5.0 out of 5 stars
Five Stars
This is the best diving anime i have ever seen!!!! i could not stop laughing fantastic Needs a second season!
34 people found this helpful

James B.Reviewed in the United States on January 1, 2019
4.0 out of 5 stars
20% cringe, 80% hilarious
Well, it's the middle of winter, which makes it the perfect time to catch up on a summer anime set during the summer. Grand Blue Dreaming was pretty popular in 2018, and after watching, I can see why.

Grand Blue starts out with Iori Kitahara, a college freshman who moved in with his uncle's diving shop instead of a dorm. There, the local club bro's , along with his distant cousins Chisa and Nanaka talk him into joining the local 'diving' club. Now, you may have noticed I put diving in quotations there, and there is a reason for that. Diving may be what the club is for, but it is not what this anime focuses on. These people party, and they party hard, and they are hilarious.

Yes, Grand Blue truly loves college drinking culture. In these 12 episodes you will see them drink, drink while naked, play pranks on each other, drink, play drinking games, struggle with school because of drinking, go on dates, drink, and occasionally do diving related things. It's also the rare show that features as much male fan-service and female, for those of you into that sort of thing. Oh, and the opening theme is one of the best of all time.

Now, here's where your mileage may vary on this show. The jokes are regularly hilarious, but the characters will fairly often come off as complete idiots to set up the jokes. It's often hard to believe these people are actually college freshman. Now, anime characters in comedies, are usually idiots, so this might not bother you much, but I won't pretend the cringe didn't bother me at times.

(here, let me light that drink for you)
20 people found this helpful

breanne behnkeReviewed in the United States on August 21, 2018
5.0 out of 5 stars
Funniest Show I've seen in a while
A few friends recommended this show to me and I was like...a show about diving? why not?
My face hurts from laughing so much at the over dramatization of almost every single thing in this show. From the screaming, the facial expressions, the normalization of lack of clothing, and even the amount of diving this diving show has. It's all just perfect.
17 people found this helpful

Aaron YunReviewed in the United States on October 24, 2018
5.0 out of 5 stars
Grand Blue is a diving anime?!
If you're looking for a 'feel-good' slice of life comedy then you've come to the right place. It almost doesn't get any better than Grand Blue. Though the show is themed around the recreational activity of scuba-diving, it's secretly all about inebriation and embracing one's nudity. There's a lot of great slap-stick styled humor while also playing on typical anime tropes while also subverting expectations once you get to know the cast's various quirks. I also enjoyed how it's somewhat of a cleverly disguised 'coming-of-age' story where the main character Kitahara experiences a lot of personal growth finding himself through diving and the friendships he forges. If you enjoyed shows like 'Baka to Test', 'Nichijou', or 'Gintama' then there's definitely something here for you.
9 people found this helpful

Derrinita WalkerReviewed in the United States on September 24, 2021
5.0 out of 5 stars
Hilarious and Heartwarming
I decided to watch this anime because it was recommended by a lot of people on a subreddit I belong to. I was expecting it to be okay, I wasn't expecting it to be FABULOUS! It's not the sports anime I thought it would be at all. There's a bit of actual technical diving know-how sprinkled in and hints of romance but all that's just a trick! When you think the stereotypical love scene or angst moment is going to happen, the anime takes an abrupt left turn into comedy. I laughed out loud so many times unexpectedly that I'm sure my house mates thought something was wrong with me. You will love this anime if you like:
- "Super genki" muscle men
- Comedy based on misunderstandings
- Episodic fun as opposed to a complete story arc
- Comedic nudity & drinking
- Mild fan service
- Strong friendship themes
It's only 12 episodes long and is not dubbed, but a lot of the best moments come from the Japanese voice actors really giving it their all! Grand Blue for the win!
One person found this helpful

Lay L.Reviewed in the United States on October 16, 2020
5.0 out of 5 stars
LOL
If you want a good laugh, this is a funny anime. It shows you the wonderful friendship and bond that guys share and as a guy myself, I 100% agree with this portrayal! Now I'm not a person who drinks lol... so that was the only part of the anime I couldn't really relate too... but overall, if you want a anime that's 5% diving, 60% drinking, 25% male bonding, 10% whatever else... this is your anime! I don't like drinking but this was funny... also best girl is Azusa!!!
2 people found this helpful
See all reviews
Back to top
Get to Know Us
Make Money with Us
Amazon Payment Products
Let Us Help You
EnglishChoose a language for shopping. United StatesChoose a country/region for shopping.
© 1996-2022, Amazon.com, Inc. or its affiliates