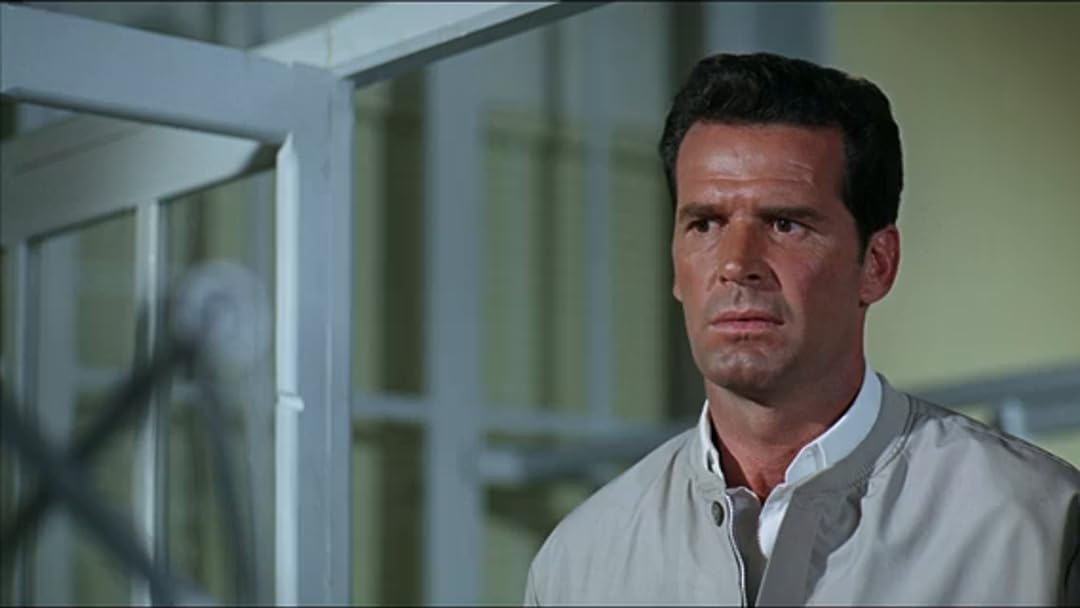 Timothy J. DollReviewed in the United States on November 22, 2017
3.0 out of 5 stars
Disappointing - it's pan-and-scan - not the original full width picture. Original was 3.0 aspect, this is 2.2
Verified purchase
I love this movie - have since I first saw it 50 years ago in Cinerama. I have both the DVD and the Blu-Ray (BTW they are identical aside from the picture resolution - the features and such are all the same) and the picture is beautiful and the sound fantastic. Yea, the plot is rather hokey but that's beside the point - this is Formula 1 in all it's glory. Some of the best auto-racing footage of all time, and plenty of cameos by the real F1 drivers of the day. Also, I happen to think the mid 1960's cars were the best looking F1 cars ever (too bad they were deathtraps).
So, why only 3 stars? Because it's pan-and-scan! I thought it didn't look quite right first time a watched it, so I pulled out my old laser disc version. The laser disc is 3.0 aspect - the DVD and Blu-Ray are 2.2 aspect ratio. Unforgivable - over a quarter of the movie is cropped. That's also why I bought the Blu-Ray when I already had the DVD - I figured they'd give me the entire movie on Blu-Ray, I thought wrong...
58 people found this helpful

SkyhawkReviewed in the United States on April 25, 2021
5.0 out of 5 stars
The Blu-ray (or in a Theater) is the ONLY way to see this movie.
Verified purchase
I was lucky enough to see this terrific movie in a movie theater last week. I was so impressed I purchased the Blu-ray. The Blu-ray has many extras along with optional commentary that made it well worth the price. It was incredible seeing this film in a sold-out wraparound 70mm Cinerama Theater.

The racing sequences are amazing. Most of the racing footage in Grand Prix are from actual races taking place in 1966. Some of the accidents are partial actual footage, and partial re-creations. You'll get a good idea what it's like to be in one of these fantastic race cars. Nothing sounds great as a V12 Engine.

Grand Prix remains a reference demo for home theater buffs due to its hard-charging surround sound and adrenalized visuals further pumped up by visual consultant Saul Bass, who created the titles and memorable split screen design.

Warner did an excellent job with Grand Prix on Blu-ray. Overall, the film looks spectacular, at times giving the impression of a film that was shot 3 years ago rather than 55 years ago. The 65mm source elements spell often breathtaking detail, film grain is light and natural, black level is deep, and color and contrast are beautifully calibrated.

It was also a joy to see these great European cities when they were still wonderful places to visit. Imagine 1966 when you could easily arrive at the airport 15 minutes before your flight and have plenty of time.

On the Blu-ray the extras include:

Pushing the Limit: The Making of Grand Prix
Flat Out: Formula 1 in the Sixties
The Style and Sound of Speed
Brands Hatch: Behind the Checkered Flag
Grand Prix: Challenge of the Champions
Theatrical Trailer

I'm very happy to have this Blu-ray in my 3000 disc collection where I know that in the future it cannot be banned or censored.

Surf AccountantReviewed in the United States on April 23, 2016
5.0 out of 5 stars
Love the film, treasure the documentaries!
Verified purchase
OMG, I was blown away by this movie as a 9 year old when it first came out. I am still blown away by this movie when I went through the special documentaries on the BR disc and learned: this movie was filmed as the actual races were being run, James Garner and the two Italian actors did their own driving, and James Garner really did bail out of a crashed car suit on fire! The actual drivers of the time (now legends in their own right) have cameos and small speaking parts; and this is perhaps the only tour of the actual Ferrari works and production line at that time. That they used an actual Ford GT40 as the camera car and had cameras the size of suitcases mounted on the film race cars, unbelievable. And the real cars filmed; not one advertisement on them, just the makers marks and the beauty of the styling to relish. Truly a beautifully-made film (no cg or green screen) of the era of Camelot in Motorsports. And Steve McQueen's remark to James Garner after he saw the film....Priceless!
15 people found this helpful

James Kearney Jr.Reviewed in the United States on June 29, 2018
5.0 out of 5 stars
I love this movie
Verified purchase
I love this movie. I remember seeing it a few years ago for the first time and recently added it to my collection. Whoever did the conversion of this to Blu-ray did a damn fine job considering the movie came out in the sixties I think. Was doing some research on the movie and I guess that actually filmed it during some actual races that you see in the movie itself. Some of the camera angles that were used in here still blow my mind today. I can only imagine what it was like when the movie first came out back in the day. If you consider yourself any kind of F1 fan, this movie is an ABSOLUTELY must see (and own). I would say it is a bit of a love letter to the sport. Shows the glamour and somewhat of the dark side/danger of the sport also. Can't recommend enough. The runtime I believe is close to 3 hours, but so worth it.
7 people found this helpful

Robert SchafferReviewed in the United States on October 13, 2014
4.0 out of 5 stars
Great Racing footage!
Verified purchase
This is primarily a melodrama with extraordinary racing sequences. For fans of racing films this film is a must see movie! Even after all these years the racing sequences still hold up surprisingly well.

When this movie was still in production they showed the racing footage that had already been completed to Ferrari and they were so impressed by what they saw that they invited the the filmmakers to shoot inside the Ferrari racing factory (up until that time nobody--not even Sports Illustrated--had been allowed to photograph the inside of that building). Quite a compliment!

Steve McQueen was offered James Garners role first and turned it down thinking this was going to be just another Hollywood racing picture in which (like all that had preceded it) nothing bore any resemblance to the REAL racing world. Once the film came out and he had a chance to see it, he was heartbroken that he'd passed on it and in his frustration went on to make the practically ALL racing footage and less-plot-than-it-would-take-to-fill-a-thimble "Le Mans".

A bevy of top professional drivers were employed to train the actors so that they would look convincingly like real race car drivers while being filmed. James Garner was coached by Dan Gurney and had such an natural affinity for driving that by the time his sequences were filmed he was on a level with some of the drivers making a living at it professionally. Gurney said that if he was willing to do it full time he could have been one of the top drivers in the field.

As a movie itself, if you like melodrama you will more than likely be entertained. If you don't, but you love fantastic racing footage, this is one of the finest examples of that which you will ever be likely to find. If neither interests you, this may not be your cup of tea.
15 people found this helpful

alliedbeaverReviewed in the United States on April 23, 2015
5.0 out of 5 stars
Frankenheimer, at his creative peak, produces another winner, demonstrating his mastery of the film maker's art.
Verified purchase
This a beautiful, exciting, riveting examination of Grand Prix racing, as told through the observations and intertwining personal lives of four professional Formula 1 drivers and their respective love interests. The romantic and philosophical interludes are mere reprieves from the exciting, heretofore unseen, technically majestic racing action camera work. Bear in mind, miniature cameras were not available in the sixties, and the engineering know-how and chutzpah required to strap a large analog camera to the front of a race car going 180 mph is truly awesome. Yves Montand is the most interesting character, with a complex triangular relationship between his wife, the lovely Eva Marie Saint, who is a welcome distraction from his troubled marriage, and his obsession with racing. Garner is fascinating as the vexed, displaced professional racer looking for a new drive, and finding a successful assignment with Toshiro Mifune's nascent racing company (the theatrical equivalent of Soichiro Honda's formidable Honda Motors). Brian Bedford is convincing as a world class racer recovering from a deadly crash, and simultaneously picking up the pieces of his broken relationship with his disapproving spouse, the captivating Jessica Walters. Antonio Sabàto is believable and likable as a young, world champion motorcycle racer who has made the transition to Formula 1, although his ongoing squabbling with his beautiful girlfriend, Françoise Hardy, who we never really get to know, although we would like to, is an unnecessary distraction at best. As the movie progresses he continually receives better dialog and has a touching and tragic scene at the end, as he rolls into the Ferrari pits in utter and complete disbelief and despair. Many famous Formula 1 drivers of the day appear in the film including Jim Clark, Jack Brabham and many others, which lends an air of "You are There" realism. Many of them, such as Graham Hill, are not mere cameos, and actually participate in many dramatic scenes. The cars are the stars in this petrol head blockbuster, although you will find the attractive and talented supporting cast and subplots an interesting distraction. Many characters appear one-dimensional, although this may be due to heavy editing to reduce the film to a tolerable running time. One of the top film from the sixties, and Frankenheimer at his finest.
6 people found this helpful

ooma fanReviewed in the United States on December 23, 2019
4.0 out of 5 stars
Classic race car movie
Verified purchase
Understand that this was a lethal sport in the 50s, 60s, and 70s. Grand Prix captures that and has excellent racing scenes as well (they are formula 3 cars disguised as formula 1). The cars not driven by movie stars are driven by real formula 1 drivers--7 of the 30 or so were killed in crashes in the next ten years. Yeah it was that bad.

From the point of view of plot and interpersonal relations, Ford v. Ferrari is a better put together film, better acting too. But no law against watching them both.
2 people found this helpful

Daniel S. GlickmanReviewed in the United States on March 5, 2020
5.0 out of 5 stars
The Best Car Racing Movie of all Time!
Verified purchase
If you are a fan of Formula One racing from the 1960's (an era that defined courage as there were no safety features on the cars and many racing drivers perished in accidents during this decade), you will love the racing action in this classic film. The director, John Frankenheimer, captured the actual feel of Formula One racing by placing movie cars in actual Formula One races that year. From the very first scene, the racing action is intoxicating. The soap opera subplot is not so great, but it simply does not matter as no racing film before or after has duplicated what Grand Prix was able to do.
See all reviews
Back to top
Get to Know Us
Make Money with Us
Amazon Payment Products
Let Us Help You
EnglishChoose a language for shopping. United StatesChoose a country/region for shopping.
© 1996-2022, Amazon.com, Inc. or its affiliates