The Grandma Book and millions of other books are available for Amazon Kindle. Learn more 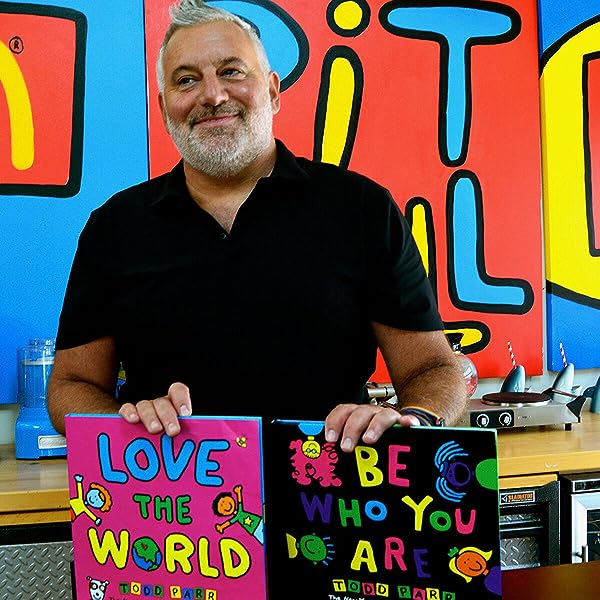 by Todd Parr (Author)
4.8 out of 5 stars 254 ratings
See all formats and editions
Sorry, there was a problem loading this page. Try again.

Grade 1-4-In this affectionate and humorous pair of books, Parr explores the differences among grandparents: Some grandmas have a lot of purses; Some grandpas can wiggle their ears. He also notes their similarities: Some grandmas live with a grandpa; Some grandpas live with a grandma. The books end with a short message about grandparents and a reminder to tell them that you love them. The artist's skillful use of bright neon, supersaturated colors, thickly outlined simple figures, and brief text combine to make the books lots of fun. Good additions to any collection and wonderful choices for a storytime.-Linda Staskus, Parma Regional Library, OH
Copyright © Reed Business Information, a division of Reed Elsevier Inc. All rights reserved.

Todd Parr has inspired and empowered children around the world with his bold images and positive messages. He is the bestselling author of more than forty books, including The Goodbye Book, The Family Book, The I Love You Book, and It's Okay to be Different. He lives in Berkeley, California.
Start reading The Grandma Book on your Kindle in under a minute.

Todd Parr is a three-time New York Times bestselling author and illustrator of more than 50 books for children, including The Thankful Book, The Earth Book and The I LOVE YOU Book, as well as The Kindness Book and the recently released The Spring Book and The Activity Book, all from Little, Brown Books for Young Readers. He has inspired and empowered children around the world with simple, hopeful and powerful messages such as “be kind”, “love yourself” and “be who you are” all set with vibrant images utilizing eye-catching primary colors. His books have received numerous awards and are available in nearly 20 languages. He also is the co-creator of the popular three-time Daytime Emmy©- nominated animated TV series, ToddWorld with Gerry Renert of SupperTime Entertainment. Several short films for Sesame Street have been based on Todd’s work.

A flight attendant before becoming a full-time author/illustrator, Todd’s first book, The Okay Book, was published in 1999. Todd devotes time to numerous philanthropic causes supporting pet adoption, children’s hunger, health, and literacy. He is a frequent reader and fund-raiser for The Ronald McDonald House, and he also currently serves on the board of directors for the Virginia Children’s Book Festival. Todd’s corporate collaborations include Best Buy, Stouffer’s, and the San Francisco-Marin Food Bank, among others.

The Wyoming native lives in Berkeley, CA, with his three adopted pit bulls and enjoys cooking. He is often whipping up macaroni & cheese, tacos, and grilled cheese recipes, which he regularly shares with fans. For more information on Todd visit his website, Facebook, or Instagram.

Amazon Customer
2.0 out of 5 stars Typo.... :(
Reviewed in the United States on May 12, 2018
I love the Todd Parr books and bought this one for my mom from my son. There is a typo/error on one of the pages that really bothers me...
Images in this review

Adara Jashel
5.0 out of 5 stars For every type of grandma
Reviewed in the United States on April 14, 2022
Verified Purchase
Bought this for my mom who soon to be a grandma and she loved it!
Read more
Helpful
Report abuse

Deborah R.
5.0 out of 5 stars My Daughter has wanted this one for a long time!
Reviewed in the United States on January 1, 2015
Verified Purchase
My daughter loves all of the Todd Parr books. She has Down Syndrome, and she loves to read and copy the pictures. The pictures are easy to look at and copy, and she makes her own little "books". She wants all of the Todd Parr books eventually! I would recommend these books to any young child, and any child with Autism or Down Syndrome, as they are very easy to read, and keep their interest.
Read more
3 people found this helpful
Helpful
Report abuse

JJBees
5.0 out of 5 stars Fun book for kids and Grandmas!
Reviewed in the United States on May 18, 2019
Verified Purchase
Such a great book! Love the colors and the story about Grandmas that most kids can relate to. My kids all love to sit with grandma and read this book with her and talk about what she does or doesn’t do like the story talks about.
Read more
One person found this helpful
Helpful
Report abuse

Emerald Johns
5.0 out of 5 stars Great
Reviewed in the United States on March 11, 2021
Verified Purchase
Great book my daughter loves it but it sadly came a little ripped but still a great buy
Read more
Helpful
Report abuse

Kristina Watson
5.0 out of 5 stars This is a great book to prepare for grandparents day.
Reviewed in the United States on November 26, 2021
Verified Purchase
I loved this book. My 3 year old students loved talking about their grandparents and we used it as a springboard for a journal writing.
Read more
Helpful
Report abuse

Heather Balester
5.0 out of 5 stars The Grandma Book Rocks!
Reviewed in the United States on October 14, 2013
Verified Purchase
We first got "The Grandpa Book" for our grand-daughter, and she loved it so much we hunted down "The Grandma Book" as well. Our grand-daughter is three years old, a perfect age for this book, and lives about four hours away from us, so we don't get to see her as often as we'd like (i.e., every day...). These books help her remember us and the fun times we get to share. At the back of each book is a place for pictures of us together. Her mom and dad report that she kisses the pictures good night after they read her the books. Awwww...!
Read more
6 people found this helpful
Helpful
Report abuse
See all reviews

Sue
5.0 out of 5 stars Lovely book
Reviewed in the United Kingdom on July 21, 2016
Verified Purchase
Easy to read for them & us & colourful
Read more
Report abuse

Jayne Oldridge
5.0 out of 5 stars Perfect read
Reviewed in the United Kingdom on May 3, 2018
Verified Purchase
I bought this book to read to my granddaughter. I love the book!
Read more
Report abuse

Yank in London
5.0 out of 5 stars Another great book from Todd Parr
Reviewed in the United Kingdom on September 17, 2009
Verified Purchase
We first got Todd Parr's "The Feelings Book" when my daughter turned one. She loves his books and, at 18 months old, "The Grandma Book" is now her new favourite. Plus, if you're going to have to read a book over and over again, at least this is one that adults will find fun to read too!
Read more
3 people found this helpful
Report abuse

Janet Hudson
5.0 out of 5 stars Five Stars
Reviewed in the United Kingdom on November 1, 2015
Verified Purchase
Yes more than I imagined and I cannot wait to read it and discuss with my granddaughter
Read more
One person found this helpful
Report abuse