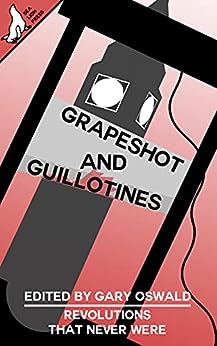 Grapeshot and Guillotines: Revolutions that never were Kindle Edition

What if they weren't? What if Canada had won its independence in 1837? What if the Taiping rebels had formed their own country in China? What if Trinidad revolted against the British in the 1930s? What if a Socialist Commune arose in East Sussex?

In this collection of 13 short stories, the authors of Sea Lion Press explore the revolutions that never happened.
Read more
Previous page
Next page

C
4.0 out of 5 stars To the barricades!
Reviewed in the United Kingdom on May 24, 2021
Verified Purchase
A wide-ranging collection of revolutionary alternate histories: some that won, some that failed, some that went badly wrong, and happening to multiple countries - you're not getting umpteen variations on the same thing. There's uprisings in America and Canada, but there's also Latin America, the Carribean, China, and one story in Japan that's a sequel to the publisher's Decisive Darkness duology. Tones very but generally, it's quite wistful and bittersweet, tales of aftermaths and questionings and 'what might have been' and difficult compromises.

Most stories also come with a special afterword explaining the historical background and thinking behind the stories, which adds extra depth and show many of these fake revolts came close to happening (and real ones, close to failing).
Read more
Report abuse
See all reviews