Grave Mistake: A Witchy Paranormal Cozy Mystery and millions of other books are available for Amazon Kindle. Learn more 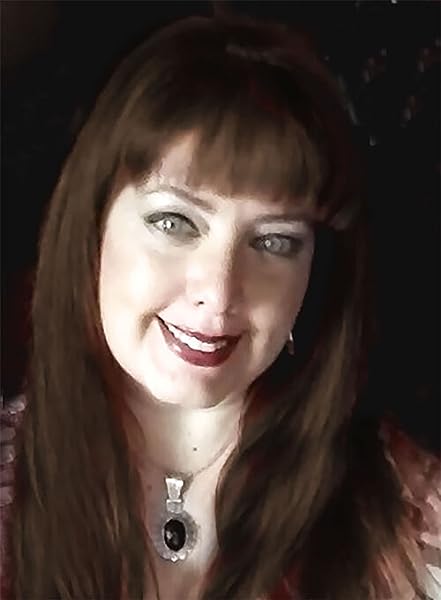 by Christine Pope (Author)
4.2 out of 5 stars 347 ratings
Book 1 of 6: Hedgewitch for Hire
See all formats and editions
Sorry, there was a problem loading this page. Try again.

When you pull up stakes, make sure you don’t get stabbed in the back.

Selena’s not interested in the slimy, celebrity-schmoozing sorcerer, but nobody turns Lucien down without consequences. When he threatens to fit her with magical cement shoes and drop her off the Santa Monica Pier, Selena’s Tarot cards point her to Globe, Arizona, for a new home, a new shop, and a cursed pet cat.

Just as she’s settling in and meeting the locals — including Calvin Standingbear, hunky chief of the San Ramon Apache tribal police — Lucien tracks her down…and promptly disappears. When his body turns up on tribal lands, it’s up to Calvin to investigate. Starting with Selena.

And when one of Lucien’s acolytes is killed, traces of dark magic and cryptic warnings from the spirits send Selena and Calvin in a race against time — before a too-close-for-comfort evil cuts her own life short.

The Hedgewitch for Hire series will continue with book 2, Social Medium, releasing on March 31, 2021. The romance subplot will stretch over the entire series, while each novel will be a self-contained mystery without a cliffhanger.

Start reading Grave Mistake on your Kindle in under a minute.

A native of Southern California, USA Today bestselling author Christine Pope has been writing stories ever since she commandeered her family’s Smith-Corona typewriter back in the sixth grade. Because she's a lover of many genres, her books include paranormal romance, fantasy romance, and science fiction/space opera romance. She blames this on being easily distracted by bright, shiny objects, which could also account for the size of her shoe collection. The Land of Enchantment cast its spell on her while she was researching her Djinn Wars series, and she now makes her home in Santa Fe, New Mexico.

To be notified of new releases, you can sign up for Christine Pope's newsletter here: https://app.mailerlite.com/webforms/landing/d2c6e2

4.2 out of 5 stars
4.2 out of 5
347 global ratings
How are ratings calculated?
To calculate the overall star rating and percentage breakdown by star, we don’t use a simple average. Instead, our system considers things like how recent a review is and if the reviewer bought the item on Amazon. It also analyzes reviews to verify trustworthiness.
Top reviews

Avid Book Lover
5.0 out of 5 stars Romantic Paranormal Suspense!
Reviewed in the United States on January 22, 2021
Verified Purchase
I absolutely loved reading this book! This a great kick-off to a new series that I will definitely be reading. There’s lots of suspense, mystery, and romance in this excellent plot line. The characters are all outstanding. You’ll find yourself falling in love with Selena, Archie, Josie, and especially Chief Standingbear. As the mystery unfolds, you’ll be caught unaware as the twists and turns are totally unexpected. This is another one of those books that you won’t want to put down even for a minute. I received a free review copy of this book (and subsequently purchased it to add to my library) and am voluntarily leaving a review.
Read more
5 people found this helpful
Helpful
Report abuse

Kindle Customer
4.0 out of 5 stars Cute and quick read
Reviewed in the United States on January 30, 2021
Verified Purchase
Over way too fast, which is both a good thing and a bad thing. I like how the voice wasn't too much in mc's head, which is quite frankly a bother in many books nowadays, so truly appreciate that. I think I'll pick up a few more reads from this author, I like the straightforward style of her writing and that she trusts me to use my own imagination while reading.
Read more
5 people found this helpful
Helpful
Report abuse

LMM
5.0 out of 5 stars Wow, this was a great first in a series!
Reviewed in the United States on April 4, 2021
Verified Purchase
NO SPOILERS. I read mostly kindle unlimited, 500 + books a year. I Do have some authors I buy, This author just became one of them.
Basically, girl leaves Los Angeles to get away from a pushy male witch. He shows up and gets himself killed. The mystery was good, learning the town, meeting our characters and the magic is all woven together unto a realllly good story. NO WHINEY air head childish characters here. Loved it!

Jamie W.
4.0 out of 5 stars New town, new life, new...murder charge?
Reviewed in the United States on June 21, 2021
Verified Purchase
3.5 Stars! Grave Mistake is my first book by Christine Pope. It was an enjoyable read with a likeable female main character.

Summary:
Hedgewitch Selena Marx is happy providing divination to the average residents of Los Angeles. She has no designs on being famous or obtaining a cult following. She just wants to practice her craft in peace and maybe help a few people along the way. If only Lucien Dumond could understand her simple motivations and leave her be. Unfortunately, the infamous sorcerer has set his sights on adding Selena to his harem of devotees in his empire, the Greater Los Angeles Necromancer’s Guild. Getting out from under his radar proves to be difficult resulting in Selena taking drastic measures. Uprooting her life and setting up shop in a small Arizona town sounds crazy, but it feels like the right decision. Just as she gets settled in and starts meeting the locals, none other than Lucas Dumond shows up on her doorstep. When Lucas’s body is found almost as soon as he arrives in town, it’s up to the hunky San Ramon tribal chief of police, Calvin Standingbear, to investigate. Selena is his primary lead and suspect after learning of their acquaintance and argument the day before his death. But things ratchet up when a colleague of Lucas’ dies shortly after him. Selena will have to focus all her senses to help Calvin find a killer before they decide to target her, too.

Grave Mistake is a light paranormal mystery with romantic elements. While not overwhelmingly outstanding, I did find the supernatural mystery, hint of romance, and getting to know the female MC interesting. Selena was easy to like. I found her to be very open minded and light-hearted with a natural ease for magic. I had hoped to see a bit more practical magic from her, but was intrigued, nonetheless, with the amount we did get. Selena was pretty confident in her craft, and I liked that she didn’t second-guess herself or her intuitions. As for her love interest, Calvin, he has a lot of potential and is really the only romantic option I see for her right now. I feel like there is a lot more to his story, though, so I’m looking forward to that being revealed as the series progresses. The romance in this book is really only hinted at, but with the potential to become a greater story arc in future books. I liked the flirty, and sometimes slightly awkward moments between Selena and Calvin. It was smoothed over, but a genuine feeling of two people meeting and slowly feeling out how they could fit together. In the end, I wasn’t blown away by the story. The supernatural mystery made it a fun read, but I had guessed pretty early on who the culprit was. That said, Selena was the main draw for me, and I look forward to learning more about her, as well as maybe seeing her use her craft more. I will definitely be reading on in this series, and checking out a few of the other series written by this author. If you’re in the mood for a lightly entertaining paranormal read, I highly recommend sitting down with Selena and the small town of Globe, AZ. ♡

E.P. McLean
3.0 out of 5 stars First in series
Reviewed in the United States on May 10, 2021
Verified Purchase
Witch moves to small town to get away from more powerful witch. Very formula. Reminds me strongly of Arthur’s, “Lizzie Grace” series only think more teenager. Fast pleasant read with few highs or lows. Minimal violence and generic talk of sex. Nice characters with no hard edges.
Read more
3 people found this helpful
Helpful
Report abuse

TB878
3.0 out of 5 stars A little slow and wondering about Globe
Reviewed in the United States on October 15, 2021
Verified Purchase
As an Arizona resident (in one of the towns mentioned in her book), I was having a a hard time reconciling real-life Globe with the sleepy little paintbrush the author used to portray Globe in her book. Add in the slowness in which the story unfolded and I was bored before I got halfway through the book. I’m going to try Book 2 sin there were some good parts to Book 1. Hopefully the author will bring up the level of interest needed to keep readers engaged.
Read more
One person found this helpful
Helpful
Report abuse

Michelle
5.0 out of 5 stars a special witch
Reviewed in the United States on February 14, 2021
Verified Purchase
she is a special witch that keeps on getting bothered by another stronger worlock but after she gets a good idea about starting fresh from the universe she didn't expect alot of things happened to her. some good and a few interesting bad but she is very determined to find out the truth about what happened and why. it is awesome and i soooo can't wait 2 read more asap!!
Read more
Helpful
Report abuse

Kindle Customer
4.0 out of 5 stars Interesting viewpoint
Reviewed in the United States on May 18, 2021
Verified Purchase
Knack for describing buildings and places, but didn't really feel involved in characters, not even the asexual cat. Cat fairly unique. Mine would only need 6 words, feed me, pet me, open door. Does understand two. No and name, but name might be mistaken for treat.
Read more
Helpful
Report abuse
See all reviews

carolroper
5.0 out of 5 stars Hooked from the start
Reviewed in the United Kingdom on February 3, 2021
Verified Purchase
Brilliant can’t wait for the next one
Read more
Report abuse

Kindle Customer
4.0 out of 5 stars Grave Mistake
Reviewed in Australia on October 18, 2021
Verified Purchase
Selena had to get out of LA.
An evil group, well it's Leader, is after.
So Selena does the sensible thing and relocates.
But Lucien follows.
There murders, mystery, magic and and a sexy guy, yum
Read more
Report abuse

Amazon Kunde
5.0 out of 5 stars Intelligent and humerous
Reviewed in Germany on January 24, 2021
Verified Purchase
Exciting and funny to read.... love it
Read more
Report abuse
See all reviews
Back to top
Get to Know Us
Make Money with Us
Amazon Payment Products
Let Us Help You
EnglishChoose a language for shopping. United StatesChoose a country/region for shopping.
© 1996-2021, Amazon.com, Inc. or its affiliates