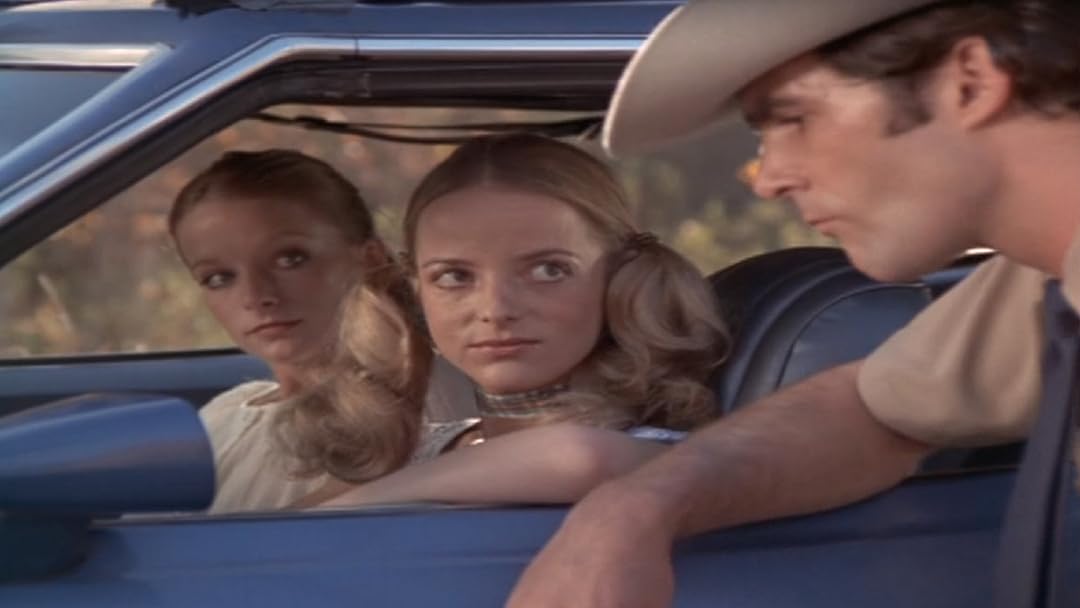 (35)5.91 h 30 min1976R
Strap yourselves in for explosive drama and action when two sexy girls go on a bank-robbing binge.

George GoldbergReviewed in the United States on August 24, 2020
1.0 out of 5 stars
Not funny at all.
Verified purchase
Nothing funny at all. The two female protagonists lack charm, and the crimes they commit (with a laugh) could put them in jail for life. That they escape capture after attempting to kill police officers in a squad car is simply incredible – that is, there is no way that could happen. That a legal seller of dynamite would sell them a whole case of it when they had no license to purchase dynamite (as for strip mining), and admitted to him that they intended to use it to rob banks, is likewise not believable, even with sex thrown into the bargain – as he will be held responsible as an accessory which could warrant a sentence of many years in prison and, of course, the revocation of his license to sell dynamite. They also steal cars and hold up a convenience store with a gun, offenses also likely to put them in prison for many many years if not for life. And that’s barely half way through this farrago. Nothing funny at all.
One person found this helpful

Nicholas J MalinoReviewed in the United States on October 27, 2019
4.0 out of 5 stars
Fun and Sexy
Verified purchase
definitely a movie that you can watch while you are doing something else because it doesn't take a lot of concentration and everything moves in a pretty predictable fashion, but I really liked it it was just plain funa nd won't burn out a single brain cell. - Mindless fun.
One person found this helpful

J. BarbeeReviewed in the United States on February 22, 2002
5.0 out of 5 stars
Claudia Jennings Lives!
Verified purchase
If anyone out there besides me watched "Thelma and Louise" and wondered why they had to drive off that stupid cliff at the end, and how exactly that denoted a "happy" and "satisfying" ending, you're gonna love this movie. Funny enough, "the Great Texas Dynamite Chase" got it just right about 15 or so years earlier.
Yes, yes - the title is quite ridiculous, but do not (I repeat, DO NOT) let this scare you away. Women robbing banks with nothing but dynamite? Genius. It's filled with the kind of... female empowerment that was strangely only tolerated in the context of a cheapie exploitation film. It's loaded with what I've dubbed "Charlie's Angels" feminism -- that is to say, the women may appear to be tantalizing packages, but try to unwrap them on anything less than their terms and KA-POW! Duck and cover baby! Besides, in this day of sexual taboos, it's pleasantly refreshing to see a movie that treats sex as fun and inconsequential. (Ahhh, those were the days, eh?) Plus, it stars underrated drive-in superstar Claudia Jennings, who gives a typically fever-pitched, ballsy performance despite suffering a back injury midway through filming.
It's high time this film was re-released after long being unavailable. Hey, Corman - how about following suit with "Unholy Rollers"?

gReviewed in the United States on April 15, 2020
5.0 out of 5 stars
"Thelma and Louise"
Verified purchase
So, this is where they came up with the idea for "Thelma and Louise!" This movie was much better. Hollyweird isn't capable of an original idea or thought. This is why I like the old stuff. It makes the new stuff look pathetic.

robert campbellReviewed in the United States on October 30, 2010
5.0 out of 5 stars
Loved it!
Verified purchase
What a great movie! Others have summed up the plot here already. Claudia Jennings, a beautiful Playboy Playmate, played in this movie. She was tragically killed in a automobile accident back in the late 70's. Johnny Crawford who played a little boy in the TV show "The Rifleman" is here for a romp. He wasn't too bad, but his love scene in the movie with that horrible song in the background didn't help matters much. All in all this is a great movie, with good music and some great scenes like when the dynamite wouldn't work when lit and it made like a light raspberry sound. I saw this flick many years ago at a theater in San Francisco called the Pix, a little place where you had to keep your feet off the floor for the rats that were crawling about. The audience was cheering and catcalling throughout the whole thing. It was great!
4 people found this helpful

cookieman108Reviewed in the United States on October 30, 2005
3.0 out of 5 stars
"Where'd you get this honky dynamite, man?"
Verified purchase
Seems many of the women who appear in a certain men's magazine have the same aspiration, to make it big as an actress in the movies...some have made the transition (to some degree), but for most, their dreams remain unfulfilled, most likely due to an actual lack of talent. As I said, some did manage to cross over, one in particular being Miss Claudia Jennings, Playmate of the year for 1970. She had a great many qualities, including and easygoing naturalness is front of the camera, attractive features, and a willingness to shed her clothes, this last one particularly handy given the roles offered to her in such exploitive B films like Deathsport (1978), Moonshine County Express (1977), 'Gator Bait (1974), Truck Stop Women (1974), Unholy Rollers (1972), and this film titled The Great Texas Dynamite Chase (1976) aka Dynamite Women. Sad thing is, right about the time when she seemed to be rising above her exploitive beginnings (and getting her life back under control from substance abuse issues), her career was cut short after she fell asleep behind the wheel of her car and an accident ensued. Directed by Michael Pressman (The Bad News Bears in Breaking Training, Doctor Detroit), the film stars, as I've mentioned, Claudia Jennings, along with Jocelyn Jones (The Other Side of the Mountain, Tourist Trap). Also appearing is former Mouseketeer Johnny Crawford ("The Rifleman", Village of the Giants), Christopher Pennock ("Dark Shadows", "General Hospital"), Tara Strohmeier (The Student Teachers, Candy Stripe Nurses), and Oliver Clark (A Star Is Born, Doctor Detroit, Ernest Saves Christmas).

Jennings is Candy Morgan, a recent escapee from a Texas federal women's penitentiary, whose first act upon self parole is to rob a local bank by threatening to blow the place up with some dynamite (seems Candy learned how to use dynamite in a prison work/reform program, and subsequently used it to aide in her `early' release). After successfully liberating some funds, she passes the dough on to her family who were in peril of losing their dirt farm, and then takes it on the lam. Soon she runs into Ellie-Jo Turner (Jones), recently fired bank teller (the manager didn't like her modern i.e. loose lifestyle), the two become friends, and decide to team up and pull off more jobs together. After a botched robbery attempt and a brief stop at a nearby mining operation to get more boom boom sticks (giving Candy a chance to get her groove on with a strapping, shirtless workman), the girls take their show on the road. The begin hitting podunk banks all throughout southern Texas, eventually picking up a hostage named Slim (Crawford) who ends up throwing in the girls and the threesome continue on their merry way. By now their antics are widely known (they're labeled by the media as the `dynamite women'), and the authorities are mounting a full scale manhunt (or womanhunt, whichever you prefer), taking a `shoot first, shoot again, ask question later' attitude, so what does our thieving trio do? They get themselves a fancy white Rolls Royce...romance blooms between Ellie-Jo and Slim, the latter beginning to worry about the very likely possibility of getting shot dead, but the girls want to make one, last giant haul before heading south, that is if the Candy and Ellie-Jo can only manage to keep it in their pants long enough...

Originally released through Roger Corman's New Concorde company, the film has all his signature markings in that it's cheap, fast, and slightly sleazy. But that's not to say it isn't any fun, because it is...hey, any movie where I get to see two sets of bazooms in the first three minutes ain't all bad (one should set their expectations accordingly to the material). Corman may not have won any Oscars for his films, but few directors/producers knew their audiences better than he, and were able to give them what they wanted so consistently. The film is pure drive-in hokum, released at a time when there was no such thing as a home video market...there's a seemingly female empowerment quality to the story, but it was really just `faux' feminism perpetrated by the filmmakers to allow for the ladies to run around braless, pop their tops, and bed male characters at any given opportunity, as also seen in other films of the time like The Student Teachers (1973) and Candy Stripe Nurses (1974). The women audience members were supposed to identify with the strong female characters, while the male audience members got to gawk at jooblies...something for everyone. The story moves along at a pretty good clip and features some decent, but not stellar, car chase sequences, along with silly hi-jinks and what not...the movie's listed as a drama/thriller, but there's a comedic undertone throughout much of the story, a breezy attitude highlighted by a whole lot of twangy, good old boy music, whose repetitiveness got old as the movie progressed. Picture the Dukes of Hazzard with nekkidness and a bit more violence, with the main characters being women instead of men. It did seem very odd that the girls should go out and purchase a big, old, white Rolls with their ill gotten booty, as it was conspicuous as hell, but whatever...if you're looking for some slick, high quality action, stick to the recommended releases on the shelves of the local video store, but if you're looking for some cheap thrills, the kind produced exclusively for indiscriminate drive-in audiences, then you're in the right place.

The picture, presented in fullscreen, is decent, but does feature quite a few noticeable flaws. The DVD case claims to present a `digitally remastered' print, but I'm guessing that means using whatever copy they utilized in the past for VHS releases for the DVD release. It is watchable, and after awhile I tuned out all the little imperfections on the picture and enjoyed the film. I'm unsure what format the audio is in, but it does sound good and come through clearly. Special features include an original trailer, along with various bios. Also included are previews for other DVD releases like Caged Heat (1974), The Big Doll House (1971), The Big Bird Cage (1972), and The Arena (1974).

KarenReviewed in the United States on January 7, 2017
5.0 out of 5 stars
Love It!
Verified purchase
This is one of the best movies from the 70s. I saw it in on TV. Loved it so much I got this DVD. Didn't realize until years later that Johnny Crawford from "The Rifleman" is in it. If you like films like Thelma and Louise, this will top that! Love this movie!
2 people found this helpful

blazintommydReviewed in the United States on November 19, 2019
5.0 out of 5 stars
♥♥♥♥♥♥♥♥
Verified purchase
This was my Favorite Movie - I'd love to own a copy of the uncut version on genuine Hi-Def Blu Ray.
One person found this helpful
See all reviews
Back to top
Get to Know Us
Make Money with Us
Amazon Payment Products
Let Us Help You
EnglishChoose a language for shopping. United StatesChoose a country/region for shopping.
© 1996-2021, Amazon.com, Inc. or its affiliates