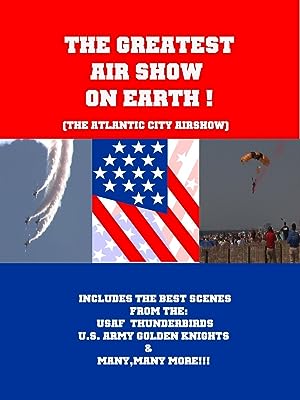 The Greatest Air Show On Earth

(8)
6.651min2009NR
Watch the video clip here!The annual August air show off the beach in Atlantic City New Jersey. This is a 52 minute video with the USAF thunderbirds as the star attraction

Keith AllisonReviewed in the United States on September 29, 2019
5.0 out of 5 stars
Wonderful show
Verified purchase
Wish I could have been there in person

DexterReviewed in the United States on May 31, 2018
1.0 out of 5 stars
One Star
Verified purchase
Not a very good airshow video,terrible video, don't waste your money on this.
One person found this helpful

Amazon CustomerReviewed in the United States on July 29, 2009
5.0 out of 5 stars
terrific air show footage
Wow! I thought this was very good I live here at the shore near Atlantic city. The video is actually two years of air shows compiled into one DVD. The producer not only captures the video and roar of the jets but included music accompaniment. It took advantage of more than one perspective. The Thunderbirds demonstration (the finale each year) was shot entirely off the end of one of the piers so it seemed as if you could touch the jets. I feel safe at this show because the jets and planes are over the water. If you ever saw this russian air show on youtube where a jet pancaked and went through the crowd you'll know what I mean about not being to close. That said this producer wisely included a lot of the show narration in the show. I still would have liked to see the face of the one girl wearing the bikini. What was funny on more than one occaision was when jets appeared from behind the crowd and when the jet roar reached the crowd you could see them wince and jump from the surprise. This other review mentions that shots of the big screen were used to much. He did use it but I think because the planes would fly behind a big pier was the reason.
Anyway I liked the video a number of funny moments and a lot of ooh's and aaaaah's!
One person found this helpful

C. K. BarberReviewed in the United States on July 20, 2009
1.0 out of 5 stars
The Greatest Air Show on Earth
What a disappointment!! I think a rank amateur filmed this. I have seen home movies shot better than this. We saw more of the people of the beach than planes. Most planes were filmed from a distance or from the large screen set up for viewing on the beach. Not worth the money in my opinion.
3 people found this helpful
See all reviews
Back to top
Get to Know Us
Make Money with Us
Amazon Payment Products
Let Us Help You
EnglishChoose a language for shopping. United StatesChoose a country/region for shopping.
© 1996-2022, Amazon.com, Inc. or its affiliates