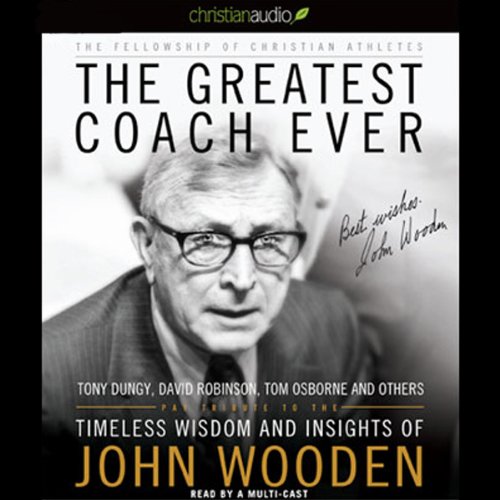 The Greatest Coach Ever: Timeless Wisdom and Insights of John Wooden

Coach John Wooden's teams won 10 NCAA men's basketball championships at UCLA, and Sporting News magazine named him the greatest coach of all time. Decades after he retired, and now after his passing, his wisdom capsulized so clearly in his famous Pyramid of Success continues to guide new generations of athletes, coaches, and people of all walks of life. In The Greatest Coach Ever, the Fellowship of Christian Athletes features 40 tributes from athletes, coaches, and other influential leaders like Bobby Bowden, Tom Osborne, Sue Semrau, Tony Dungy, Mike Singletary, Tamika Catchings, Joe Girardi, Jim Tressel and David Robinson paying honor to Coach Wooden and reflecting on how his example has challenged and changed them.

Your audiobook is waiting!
Learn more about membership
List Price: $15.39
You Save: $0.44 (3%)
By completing your purchase, you agree to Audible’s Conditions Of Use
Sold and delivered by Audible, an Amazon company
Share

Owl1123
5.0 out of 5 stars The great coach Wooden is till teaching
Reviewed in the United States 🇺🇸 on April 19, 2019
Verified Purchase
This is a great book filled with Coach Wooden's wisdom and insights. It is interesting and helpful, a joy to read. I buy copies to use as gifts for my friends.
Read more
Helpful
Report abuse

Bob Teatow
3.0 out of 5 stars 40 lightweight blurbs
Reviewed in the United States 🇺🇸 on May 10, 2013
Verified Purchase
I don't doubt Coach Wooden was a great guy.
I'm not a sports fan.
I bought the book to go through some of the "chapters" with a Christian study group.

Heh. It's about 40 different athletes and coaches who each write a page or two that is then called a chapter.
The writing is lightweight and varies in quality. The pearls of wisdom from Coach and the Bible are the saving graces of this book.

If you're looking for a biography or history of the Coach and his teams, look elsewhere - you'll get very little of that here.
Read more
One person found this helpful
Helpful
Report abuse

ladykate
5.0 out of 5 stars Great coach, great book
Reviewed in the United States 🇺🇸 on June 24, 2011
Verified Purchase
If you know anything about Coach Wooden, this is a must-read. My dad knew Coach Wooden, so when this book came out I had to get it for him. If you want to read about an inspriring man who knew how to inspire young people, you won't be disappointed.
Read more
Helpful
Report abuse

Johnny
5.0 out of 5 stars Excellent words of wisdom
Reviewed in the United States 🇺🇸 on August 21, 2010
Verified Purchase
Whether you're a coach or not, whether you're a christian or not, this book has tremendous insights about everyday living. Coach Wooden was an influence on so many and went well beyond coaching. This was very, very refreshing especially in the times we live in. . . . Highly Recommended
Read more
3 people found this helpful
Helpful
Report abuse

CDG1266
5.0 out of 5 stars Awesome book!!
Reviewed in the United States 🇺🇸 on June 24, 2014
Verified Purchase
Every coach, athlete, parent, student --- practically everyone should read this book. Very insightful and helpful for anyone who desires to be better as a person and a better Christian.
Read more
Helpful
Report abuse

Eddie McElhannon
5.0 out of 5 stars Wonderful Devotion for those short on time
Reviewed in the United States 🇺🇸 on October 17, 2016
Verified Purchase
Did a group study with this and it was highly enjoyed!
Read more
Helpful
Report abuse
See all reviews

Buyer
4.0 out of 5 stars The Title fits
Reviewed in the United Kingdom 🇬🇧 on June 21, 2012
Verified Purchase
Every sports coach should know of John Wooden. His philosophy and profound belief in everyone that he coached was inspirational and this book goes a small way into demonstrating his legacy. Wooden said that the role of a coach is not just to make a player or team better but to nurture the personal growth & development of each person as an individual. I don't share John's religious beliefs which are a major aspect of this book but if you're interested in coaching or Wooden's impact then this is a good read.
Read more
Report abuse

ramz
5.0 out of 5 stars practical wisdom
Reviewed in the United Kingdom 🇬🇧 on July 26, 2015
Verified Purchase
great book, daily readings, or smallish chapters that makes it easy to split into daily readings. Each chapter is pact with nuggets of glory and wisdom in how to live out our lives positively
Read more
Report abuse

jha van rossum
3.0 out of 5 stars Three Stars
Reviewed in the United Kingdom 🇬🇧 on May 26, 2015
Verified Purchase
Too much christianity, not enough athletics...
Read more
Report abuse