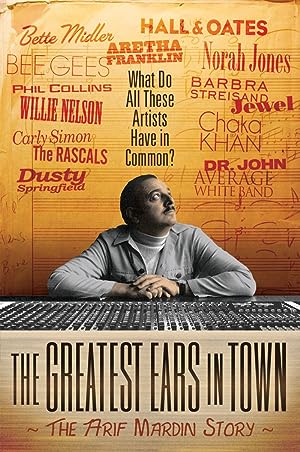 The Greatest Ears In Town: The Arif Mardin Story

(61)
6.91 h 46 min2010ALL
The Greatest Ears in Town is an insightful documentary and testimonial to Arif Mardin; the producer, arranger, musician and multi Grammy award winner. Although not a household name in his own right, the artists that Arif produced and worked with certainly are. Aretha Franklin, Dusty Springfield, The Bee Gees, Chaka Khan, Bette Midler, Barbra Streisand and Norah Jones are just a sprinkling of the talent he humbly nurtured during his lifetime. Arif was diagnosed with pancreatic cancer in 2005 and unfortunately passed in June of 2006.

bluesmeisterReviewed in the United States on September 20, 2019
5.0 out of 5 stars
incredible story of an American Immigrant from Turkey, becoming an icon of music production
Verified purchase
Great, loved it. I've worked with many of the artists he produced, including Felix of the Rascals, Carly Simon, and wonderful to hear their stories of working with Arif. Immigrants to America made this country great, and his success story in one we should celebrate. I'm a huge fan of Atlantic records, and as a kid, studied the arrangements of those records, now I know who was the genius behind them. I didn't realize he was the producer and arranger on "Rainy Night In Georgia" Written by Tony Joe White, great writer from near my hometown in Louisiana. So many other records, that I'll have to go back and listen again. Very touching tribute!
One person found this helpful

JaelynnReviewed in the United States on February 9, 2014
5.0 out of 5 stars
An Extraordinary Story, Lovingly Told
Verified purchase
Warm, good-hearted, with stunning musical performances and human moments, this film takes you deep into the long life and final project of Arif Mardin, possibly the most under-sung producer in the history of recorded music. With cameos by everyone from Aretha Franklin to Phil Collins to Norah Jones to the BeeGees, you'll be astounded by the quality and range of Mardin's output, and by how he managed to treat virtually every artist he interacted with in a way that brought out that performer's best.

This is a memoir not just of a great man, but of a golden age in the music industry. Don't miss it!

James HoneycuttReviewed in the United States on April 26, 2015
5.0 out of 5 stars
I have watched videos about Ahmet Ertegun, the founder ...
Verified purchase
I have watched videos about Ahmet Ertegun, the founder of Atlanic Records, and Tom Dodd, Atlantic Records chief recording engineer. But knew little about Arif Mardin I came across a review or two of this DVD and found the video to be interesting to purchase the DVD. Arif was an apparent genius of musical arrangement which he applied to so many famous artists and hit recordings that we all know. But this video tells the story about his final recordings. Here he recorded songs that he had written throughout his life. These recordings have been compiled into on last CD and I will probably buy the CD of these songs at some point because this DVD is so interesting. Cheers.
2 people found this helpful

MusenginstReviewed in the United States on October 15, 2014
5.0 out of 5 stars
Wonderful testament to an exceptional artist
Verified purchase
I was born in 1966 in Germany, and came to grow up loving, among other influences, so many different kinds of popular American music -- among them Carly Simon, Aretha Franklin, the Bee Gees, the Average White Band, my beloved Chaka Khan, Bette Midler ... -- it was before the age of Internet and difficult to know who really was behind the music, so at least I religiously absorbed the credits on the vinyl sleeves, and was stunned to again and again come to see the name of ARIF MARDIN in the most unexpected contexts.

I'll say that his son Joe Mardin and all of the other collaborators succeeded in creating a fine, personal, balanced, emotionally-felt but not overly reverential portrait of this great artist who was exceptionally sensitive but also knew how to get things done.

I really would love to hear more recordings of Mr Mardin's own "classical" works mentioned, especially the chamber music and the lieder. I'm not sure if there is a large "market" but judging from myself, some devoted enthusiasts.

Anyway, thanks for this really wonderful tribute; well done.
5 people found this helpful

TRob ARobReviewed in the United States on February 5, 2020
5.0 out of 5 stars
A great musician. The best you never heard.
Verified purchase
I have not heard or seen this yet. But, knowing he collaborated on this project with his son while he was ill...😢😢😢
I MUST get around to viewing this, soon.

Mike MercerReviewed in the United States on March 25, 2011
5.0 out of 5 stars
Essential Viewing for ALL Music Addicts! A Legend & Pure Class
Verified purchase
Arif Mardin was one of the last great musical architects. The accomplishments of his forty year career read as an evolutionary portrait of American contemporary music. His production, composing, and arranging credits include works from such prolific artists as Aretha Franklin, Donny Hathaway, Dusty Springfield, Bee Gees, Bette Midler, Hall & Oates, Roberta Flack, Phil Collins, Jewel, and many others. A twelve time Grammy-Award winner, his most recent decoration came as "Producer of the Year" for the Norah Jones album Come Away with Me (he also co-produced her follow up, Feels Like Home). Mardin was born in Istanbul, Turkey, on March 15, 1932. He attended Istanbul University and the London School of Economics. After a chance meeting with Dizzy Gillespie in Turkey in 1956, Mardin realized his wish to work in music. He became the first recipient of the Quincy Jones scholarship to the Berklee College of Music and graduated in 1961. He then moved onto Atlantic Records, where he worked alongside the legendary team of producer Jerry Wexler and engineer Tom Dowd. While working his way up from studio manager to in-house arranger, Mardin began what would soon become a long and distinguished run of producing hit records. From the Rascal's "Good Lovin" and the Bee Gees "Jive Talkin" to Phil Collins "Against All Odds" and Bette Midler's "Wind Beneath My Wings" Mardin's Midas touch was unstoppable. Musical attributes aside, his humanitarian efforts were also highly regarded: He was honored with the Lifting Up the World with a Oneness-Heart Award, presented at the United Nations, and was awarded the "Shofar of Peace" from the Sephardic Community of Los Angeles, commemorating 500 years of peace and friendship between the Jewish and Turkish communities. Arif Mardin will be missed, but his legacy will live forever.

This is a superbly shot and intimate documentary. It draws you into the life of Mr. Mardin, and what a life that was! I had the honor and privilege of working for him - and I can say wholeheartedly I was at my very best when I was around him. So, for me, this was hard to watch in a way, but because Joe and Doug did such a GREAT job - it made it a delight, pure and simple.
15 people found this helpful

CatRoxReviewed in the United States on June 30, 2014
5.0 out of 5 stars
Awesome insight into hit making process
Verified purchase
Absolutely captivating look at the influence a good producer has on a record.
The varied artists featured offer great insight into the entire recording process.
Sometimes it's the littlest tweak that makes the difference between a hit and a so-so tune and this documentary demonstrates that well.
Hubby is an audio engineer who specializes in mixing live music for both live events and TV shows and he called this doc "brilliant".
2 people found this helpful

R. M. MayhewReviewed in the United States on November 10, 2018
5.0 out of 5 stars
A Lot Of Surprises
Verified purchase
Had never heard of this gentleman, but have heard the music he helped create for many years. The list of artists he worked with is basically a who's who of Grammy winners. If you like music and backstories, you'll be amazed at what he accomplished.
See all reviews
Back to top
Get to Know Us
Make Money with Us
Amazon Payment Products
Let Us Help You
EnglishChoose a language for shopping. United StatesChoose a country/region for shopping.
© 1996-2021, Amazon.com, Inc. or its affiliates