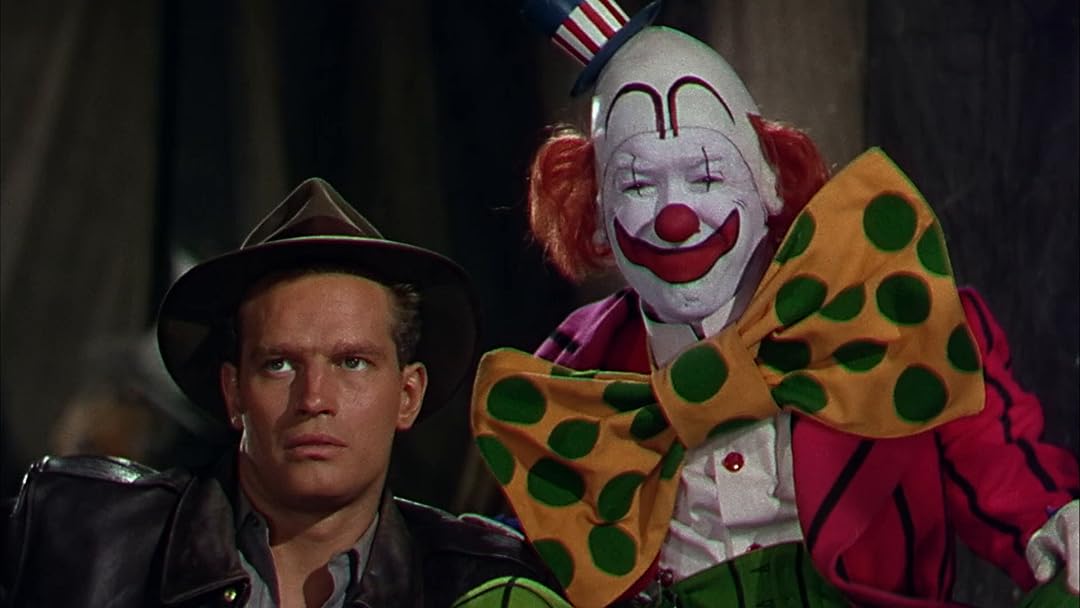 (1,537)
6.62 h 32 min1952X-RayALL
Charlton Heston stars as Brad Braden, the circus manager who lives and breathes to keep the show rolling. With the Big Top about to hit rock bottom, Braden hires The Great Sebastian, a daring trapeze legend, to revitalize the circus.

robin friedmanReviewed in the United States on March 15, 2021
5.0 out of 5 stars
Come To The Circus
Verified purchase
"The Greatest Show on Earth" won the 1952 Academy Award for Best Picture. Directed by Cecille B. DeMille, it is a lavish Hollywood spectacular, full of color, song, and dance over its two and one half hours. The film and its Best Picture award have had their critics over the years. I loved the movie. It deserved its recognition, even over a film as lasting and outstanding as "High Noon". Films like this simply aren't made anymore. Nor could one be.

"The Greatest Show on Earth" showcases the Ringling Bros and Barnum and Bailey Circus in 1951 with its troop of 1400 people and its animals. At the time, the Circus was still performing under the canvas big top. The circus gave its last show, in the late 1980s. The big top had long been abandoned. There is a sense of nostalgia in watching this film today that viewers at the time would not have felt but which might have been predicted.

The film has a long wandering plot with several stories about a rivalry and romance between trapeze artists, a clown with an unhappy past, a tough, dedicated circus manager or "boss man" played by Charlton Heston, and more. Some of the story is poignant. The major attraction of the film, however, is the circus itself. The movie captures the pace, the romance, and the hidden side of the wandering yet committed life of the circus performers as they literally give their lives to both the freedom and discipline of the circus.

The movie features trains, animals, the long nights of movement travelling from city to city, circus animals, clowns, dizzying trapeze artists, ringmasters, authentic circus acts, and broken and mended hearts. The many song and dance numbers include the invitation to "Come to the Circus" with which the film concludes. The movie is brassy, colorful and loud. During the circus performances, the film pans the audience for reactions of spectators, old and young. It offers a picture of a rostabout, seemingly footloose way of life which, like the Hollywood spectacular is no more.

In addition to Charlton Heston, the movie features Betty Hutton and Cornel Wilde as star trapeze artists and James Stewart as the laughing through tears Buttons the Clown. Lawrence Tierney plays his accustomed character role as the bad guy, the mobster Mr. Henderson. Cecille B. De Mille himself performs effectively in the voiceovers as the narrator. The named actors are all convincing but the heart of the film is with the men, women, and animals of the circus.

People tend to live their lives too seriously. "The Greatest Show on Earth" is a wonderful film that captures the lost world of fun, wandering, bands, and romance. I was glad for the opportunity to spend time with it.

Earl OrcuttReviewed in the United States on August 21, 2018
5.0 out of 5 stars
They don’t make them like this any more!
Verified purchase
Come to the circus! The Greatest Show on Earth. The Ringling Brothers Barnum and Bailey Circus folded its tents for the last time this spring, and the elephants have retired. This spectacular Cecil B. DeMille film from the 1950’s takes us back to an earlier era of clowns, aerialists, and elephants. A typical ‘50s plot, G rated language and family fun is the order of the day. They don’t make circuses like this anymore, and they don’t make movies like this any more. We are all the poorer for it.
29 people found this helpful

Cecie SinclairReviewed in the United States on December 3, 2017
3.0 out of 5 stars
NOT the widescreen version - ignore what Amazon says
Verified purchase
I really enjoyed this movie. I've been looking for a widescreen version on DVD for ages. I was thrilled to see this product listed as widescreen. It isn't. This is the standard pan and scan version that's been available for years. If it had cost more 5 bucks I would return it. Very disappointed.
20 people found this helpful

the quiet oneReviewed in the United States on August 20, 2018
1.0 out of 5 stars
This is not Widescreen
Verified purchase
I had already purchased this a couple of years ago knowing it was full screen.
I only bought it (August 2018 ) because it was supposed to include the widescreen version and it is only full screen.
Let's face it who would not want to see more of the circus than the smaller cut up version.
Why in 2017 would you even sell a movie only full screen?
I know it was only $5.00 but what a waste of money.
The movie deserves a much better rating. The false description deserves a "0" rating.
11 people found this helpful

John GarganiReviewed in the United States on March 20, 2021
4.0 out of 5 stars
Peyton Place under the Big Top...
Verified purchase
If anyone has been down in Sarasota, FLA, and has gone to the Ringling museum, they are familiar with the absolutely amazing story of just what an undertaking that circus was, the enormity of the workforce and maintenance to run, it, etc. And somehow, with what seemed astronomical expenses, back in those days, they were able to make quite a bit of money. Today, of course, it simply would not be possible, just the Zoo portion of what they did would be prohibitively unaffordable.

But it DID happen, and Cecil B. DeMille certainly pays it tribute in this fantastic movie which , on the one hand, shows in detail, just what they had to do, but on the other hand, threw in several romantic triangles and typical repressive sexual overtones of that era, to blend a crafty soap opera to go along with the festivities.

I will show my age with this statement, but back then, woman were WOMAN, with generous figures, completely free of ugly excessive tatooing. And talk about solid male leads, you had Heston, Wilde and Stewart at the helm, each with incredible performances.

This movie has a hypnotic effect with all of the pageantry and colorful scenes, and for many of us who remember that era, a highly nostalgic element for an era that will never be duplicated, due not only to the fact of financial reasons, but because young children today are not as awed by such things, jaded with the over exposure of the net.

this is how great epic movies were made!
2 people found this helpful

MoanakaiReviewed in the United States on March 8, 2021
5.0 out of 5 stars
Epic family movie
Verified purchase
A classic and a must watch for all ages. I was so thrilled when my parents took me to the circuses, I told them, seriously, I was going to join one, I was after all a contortionist, an athlete, etc. and had my heart set on doing the "ropes" but now I'm disabled and would not be able to attend even if they were still in existence. This was a real treat to me to relive all those wonderful emotions I felt when I was able to go as a child. Charlton Heston has always been a favorite of mine in all his roles, a great actor, especially young and handsome in this one. Good story, good acting, and enough variety of acts shown to substitute for actually going to the circus, so the kids of today can see how much fun it was.
One person found this helpful

RaechelrocksReviewed in the United States on July 24, 2021
5.0 out of 5 stars
Always a classic and never gets old. This is one timeless beauty!
Verified purchase
Watched this as a very young child back in the day and everytime I watch it I enjoy it. A classic beauty!! Those were the days when circus's delighted the senses... now everything is digital. The circus ended a few years ago because of animal rights activists and waning attendance probably due to the interests of people being swayed by other things that stimulate ones imagination. I am thankful that I was raised in an era where wonder and imagination filled the senses and brought smiles to the faces of people and mostly children. It was an era where life was not perfect but somehow much simpler and it wasn't filled with neverending stories of depressing news, drama and problems. Two hours of this allowed me to relive what is now gone for the most part. I am thankful to at least be able to watch movies like this once in awhile and was blessed to have been able to experience the circus as a young girl long ago. It was a memory that will forever stay with me.
One person found this helpful

Lawrence DuPontReviewed in the United States on March 26, 2018
5.0 out of 5 stars
This movie is a tribute to what the circus was for over 100 year.
Verified purchase
This has always been one of my favorite movies. It also brings back fond memories of seeing the Ringling Brothers Barnum and Bailey circus under the big top when I was a child. It wasn't quite the same when they left the big top and went into stadiums. I always wanted a HD copy of this movie, now I have one. I recommend parents showing this movie to their kids. So they can see what the circus was like years ago and why it was "The Greatest Show On Earth". It will be missed.
15 people found this helpful
See all reviews
Back to top
Get to Know Us
Make Money with Us
Amazon Payment Products
Let Us Help You
EnglishChoose a language for shopping. United StatesChoose a country/region for shopping.
© 1996-2021, Amazon.com, Inc. or its affiliates