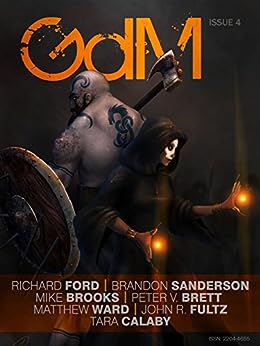 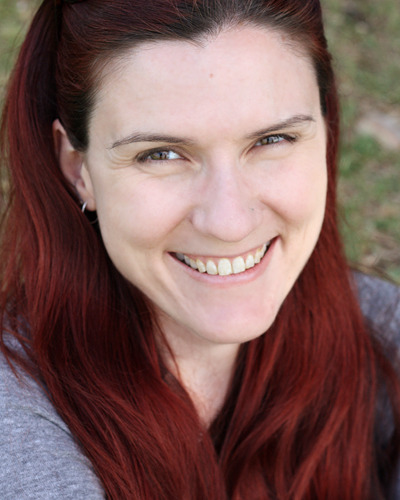 FICTION:
In Brazen Dreams by Matthew Ward shady characters converge on a powerful relic.
Tara Calaby asks "what happens after happily ever after" in Ashes.
Redemption Waits by Mike Brooks set in his Keiko universe (Dark Run).
A Steelhaven short story by Richard Ford, The Halfwyrd's Burden.
Excerpt: A Crown for Cold Silver by Alex Marshall
Exceprt: The Liar's Key by Mark Lawrence

Tara Calaby is an English-Australian writer, currently living in Melbourne, Australia. Calaby holds a Master of Arts in ancient history, a Master of Letters in creative writing, and is currently a PhD candidate in English.

C.T. Top Contributor: Star Trek
5.0 out of 5 stars Fun-fun issue
Reviewed in the United States on September 29, 2015
I've mentioned my fondness for Grimdark Magazine in previous articles for the United Federation of Charles. It's a delightful fanzine which contains articles, interviews, reviews, excepts, and short-stories about the darker side of speculative fiction.

I'm particularly fond of the nonfiction side as it's introduced, at least, the first levels of scholarly discourse which will go a long way to legitimizing grimdark as a legitimate movement in fantasy fiction versus a simple adjective for describing stories where the heroes curse as well as have sex.

The fanzine isn't perfect, at least for my discerning tastes, because I would like some more focus on the video game side of grimdark development. A regular feature of the magazine reviewing a game which shows the darker side of pixellated entertainment would be most welcome as there's no shortage of such games. I also think they should consider adding a second essay to each issue since they are, hands down, my favorite part of the magazine.

But I'm just a reader so what do I know?

In any case, the fourth issue catches me up at the time of August 4th, 2015, so I'll just get to reviewing what is yet another of a great magazine you should be picking up if you haven't already.

Yet another awesome cover from the artists at Grimdark Magazine. I like the whole scene of the skull-face-painted witch standing back-to-back with a warrior against presumed horrors to come.

"The Mud, the Blood and the Years" by Ragnarok and Orbit author John R. Fultz is an awesome article which justifies the price of purchase alone. This article talks about how grimdark is the reincarnation of the old Sword and Sorcery pulps of yesteryear, an idea I've had myself. I think there's numerous differences with them, not the least that grimdark tends to be more in-depth, but the literary roots are definitely present. Great article by THE TESTAMENT OF TALL EAGLE's author.

The Vagrant by Peter Newman gets a review here and it paints a Lone Wolf and Cub-style storyline of a mute man wandering the post-apocalypse world with a goat as well as a child. It doesn't strike me as my kind of story but the review is well-done, pointing the ups and downs of such a story.

I really enjoyed the interview with Brandon Sanderson (Mistborn, Wheel of Time) as he had some really good thoughts on grimdark and why it's necessary for fantasy to spread out. It's interesting that an author not really associated with the genre had such strong opinions on the subject.

Conversely, the interview with Peter V. Brett (Demon Cycle) talks about his skepticism about whether grimdark is really a thing or not. According to him, very few authors deliberately set out to do grimdark and a few of them (Robin Hobb was his example)being cited as examples were ridiculous.

In Brazen Dreams by Matthew Ward is about shady characters converge on a powerful relic. This has a Warhammer 40K-style feel where technology of the old world is incredibly powerful, mysterious, and full of superstition. It is also a work with a delightful twist that shows, if you're going to betray someone, you need to do right. I really liked this short-story and the twist at the end was quite enjoyable.

Ashes by Tara Calaby is best described as a feminist grimdark retelling of Cinderella with the titular character being re-imagined as a asexual (possibly lesbian) character who finds her state as Queen to be nightmarish along with the status requests of becoming a mother as well as wife. What follows is a slow, perhaps quick depending on how you measure things, descent into madness. This story made me rather uncomfortable, as it was meant to, and I'm not sure what to think of the ending other than to say, "girl needs some serious psychotherapy."

Redemption Waits by Mike Brooks is set in his Keiko universe (Dark Run). It is a story of a robbery gone wrong in a very unique church/casino set in the far future. I give kudos to any story which assumes that My Little Pony will be one of the few pieces of media to survive across the millennium. This was a fun little story without much in the way of consequences and intrigued me about the author's greater works.

A Steelhaven short story by Richard Ford, The Halfwyrd's Burden, is my favorite of the magazine's contents. A man pursuing a ruthless vigilante part of a Death-worshiping cult ends up discovering that, unfortunately (fortunately?), they're not quite talking out of their ass when they say their god is real. This is probably the best story of the magazine and really-really atmospheric.

An excerpt from Crown for Cold Silver by Alex Marshall is a story which goes in several unexpected directions. In the aftermath of a brutal civil war, an incompetent knight and his associates journey to a distant part of the countryside to deal with some obstinate locals. Things turn out to be not what they seem. The twist really surprised me given how incompetent the main character had been treated as throughout the tale.

The Liar's Key by Mark Lawrence has an except where we follow our anti-hero dealing with some local trouble he's found himself in. It doesn't give us much insight into the fellow but just enough that I'm intrigued enough to pick it up.

In conclusion, this is still a great magazine and everyone should pick it up who has any love of grimdark. My biggest complaint is there's not more of the magazine but you get what you pay for (and then some) at $2.99.
Read more
One person found this helpful
Helpful
Report abuse

Kindle Customer
5.0 out of 5 stars Happy Birthday!
Reviewed in the United States on August 10, 2015
To me (6/28/73) and happy anniversary to Grimdark Magazine! Issue 4 marks the zines 1st year in publication, and honestly, I see it going many more.
I picked this up not knowing what Grimdark is, but the one author whose work I'm familiar with happens to do the article that puts Grimdark in perspective, defines it.
So this is where I can find sword and sorcery. Or bleak futures not our own, but perhaps mirroring, offering a far cry of warning; "The way ahead is grim, perilous- DARK."
I look forward to exploring this genre, as I am very familiar with the old Swords and Sorcery authors like Robert E. Howard and Fritz Leiber, enjoyed many a gamebook like Lonewolf and Fighting Fantasy, and am particular to my old Warhammer RPG books. Also, play many a video game and watch plenty of movies and television depicting a grim, dark world.
So glad I found this magazine, I hope it expands in future publications to includd more short stories. I can honestly do without reading excerpts from novels because, and I'm sure this the intention, I am afraid I will want to immediately read the book. Maybe I'll come back to them when looking for some new reading material.
Read more
2 people found this helpful
Helpful
Report abuse

Adrian Shotbolt
4.0 out of 5 stars Great Grimdark Magazine!
Reviewed in the United States on December 24, 2015
I won a copy of this mag through their Facebook page. It's a good zine. The short stories were great and the interviews were good too ( although the Sanderson one wasn't very long ) the rest of the mag is book excerpts, which is a great way to discover new talent but I would much prefer more short stories. Well edited and put together. 4 stars for this reader.
Read more
Helpful
Report abuse
See all reviews