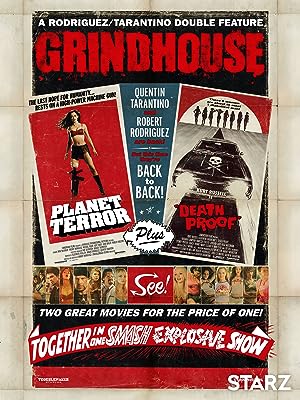 Mark C. ScerpellaReviewed in the United States on May 18, 2014
5.0 out of 5 stars
Yes,this IS the theatrical release,people!!!
Verified purchase
Robert Rodriguez' and Quentin Tarantino's 2007 double-feature opus,which pays tribute to the now-defunct grindhouse theater and its weekly selection of ultra-low budget feature films awash in bloody violence and big bad women,is now available exactly as it was originally released to theaters,with its infamous "fake trailers" intact!
(which also means that these are the abbreviated versions of the two films,"Planet Terror" and "Death Proof",not the extended versions available separately,just so you know what you're getting)
A second,two-sided disc is also included,which has lots of behind-the-scenes material.
Additional note,not important but I threw it in anyway:"Death Proof"'s little bit of dialogue about Zoe Bell coming out of being thrown from a moving car and suffering nothing more than a bruise on her bum,curiously deleted from the extended version...is here.

mike hughesReviewed in the United States on September 17, 2017
5.0 out of 5 stars
For Tarantino/Rodriguez Fans Only
Verified purchase
I thought I was back in the 70's when watching these films. They're made and edited as if they were produced in the 70's although they were released in the summer of 2007. I'm a big Tarantino fan and own most of all of his work. He could make a movie about dirt and I'd buy it. The car chase in Death Proof was about three quarters into the move was the only thing I appreciated. Rodriguez film Planet Terror was also made like it was a cheap 70's film. So unless you're a diehard fan of Tarantino and Rodriguez, you might not care to waste your time watching these two flicks.
2 people found this helpful

MartyReviewed in the United States on May 11, 2019
5.0 out of 5 stars
Finally... "GRINDHOUSE!" Original Theatrical Version!
Verified purchase
Love this movie. So much fun. However, I had a question, this is the 4th time I have purchased this DVD and every one starts freezing up during "Planet Terror", near the beginning, as she is about to introduce her "colorful little friends", to inject the dude with, at the hospital. It doesn't seem intentional because the film would burn if held for that long. It goes on for a while then stops... But every time I have bought this? Has anyone else experienced this? Thank you very much!
One person found this helpful

Homeworks Media 2Reviewed in the United States on March 29, 2019
5.0 out of 5 stars
Wunderbar
Verified purchase
everything was nice and new and works properly I don't remember how the shipping was so I'm just giving it five stars because I love these films
One person found this helpful

One Dollar BillReviewed in the United States on September 14, 2016
3.0 out of 5 stars
Plantet Terror is okay
Verified purchase
Planet Terror is okay. That other movie will make you want to blow your head off. The only bonus with this dvd is that it comes with all the trailers and the theatrical cuts of the films.

larry alfordReviewed in the United States on December 27, 2019
4.0 out of 5 stars
Unique movie
Verified purchase
Great movie, reminds me of movie back in the day

Steven MendozaReviewed in the United States on March 15, 2021
4.0 out of 5 stars
Retro
Verified purchase
Good movie
See all reviews
Back to top
Get to Know Us
Make Money with Us
Amazon Payment Products
Let Us Help You
EnglishChoose a language for shopping. United StatesChoose a country/region for shopping.
© 1996-2021, Amazon.com, Inc. or its affiliates