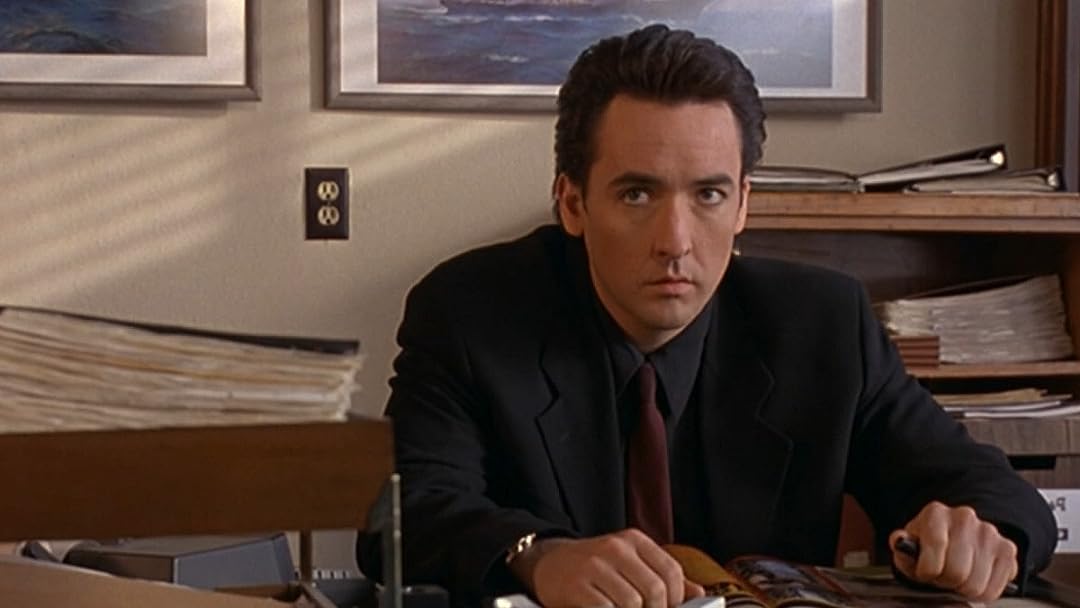 (3,974)
7.31 h 47 min1997X-RayR
Assassin Martin Blank returns to his hometown for his 10-year high school reunion. While he's in town, his secretary sets up a hit, but reconsiders his career after an encounter with an old flame.

Alex B MonsenReviewed in the United States on September 2, 2022
5.0 out of 5 stars
'Grosse-ly' (pun intended) underated 90's flick!
Verified purchase
A romantic action comedy. John and Minnie's chemistry, the hilarious supporting cast, and the nostalgic music is why you came; the lean school hall fight scene and a TV crushed on Dan Akroyd's head will keep coming back!

H. BalaReviewed in the United States on March 7, 2013
5.0 out of 5 stars
"I killed the President of Paraguay with a fork. How have you been?"
Verified purchase
[[ASIN:B002JOUNE8 Say Anything... (20th Anniversary Edition)]] and [[ASIN:B00009OWJY The Sure Thing (Special Edition)]] and GROSSE POINTE BLANK are always jockeying for top honors as my all-time favorite John Cusack picture. Should I have a yen for a John Hughes type of film, then the first two films above tend to inch ahead. But if I'm craving something more subversive, then I must roll with GROSSE POINTE BLANK. John Cusack may have cornered the market on those intelligent everyman roles. He's always presented this impression that complicated gears are always whirring around in his skull. In GROSSE POINTE BLANK, a freakin' delicious black comedy, Cusack's internal conflict has never been more pronounced.

Martin Blank is a burnt-out hit man, and maybe his moral flexibility has at last reached that snapping point. Martin has just botched his last kill. One could tell his heart wasn't in it. His employers are cheesed, royally so. He's given one chance to atone. Accordingly, the next job takes him to his hometown of Detroit.

Martin isn't one for nostalgia. Still, there's that pang of curiosity when he learns of his impending tenth year high school reunion (Class of '86, huzzah!). Check this: Martin Blank is touted as "Detroit's Most Famous Disappearing Act," given that the last anyone had seen of him, he was standing up Debi Newberry on prom night. Down the years, people assumed that he either got murdered or brainwashed or had joined a cult. You'd think it'd be a bit late (and unprofessional) for Martin Blank to develop angst, and yet there it is. In Detroit he can't help but hearken back, and especially hearken back to Debi Newberry (Minnie Driver) who today is a popular radio DJ. She's not afraid to call him out on his past transgressions.

In Detroit, Martin's personal life intrudes into his professional one. And, yeah, maybe it's hard to keep your eyes on the prize when you visit your old home only to find out that it's been torn down and replaced with a homogeneous convenience store. An exasperated (yet philosophical) Martin reflects: "You can never go home again... but you can shop there." Lest you think this movie fixates too much on angsty navel-gazing, know that there's ample action to rev up the pace. Martin's Detroit assignment isn't as by the numbers as he'd assumed, not with his rival, Mr. Grocer (Dan Ackroyd), so violently intent on poaching the kill contract. Goes to show, the murder game is such a competitive field. In fact, someone in the film refers to it as a "growth industry." Heh. By the way, it's pretty nifty seeing Ackroyd switch things up and get all sinister. Still, the action highlight has to be Cusack's hallway death match with legendary martial artist Benny "the Jet" Urquidez. It's just cool to see Cusack in a brutal, drag-out fight, even though, okay, the more advanced moves were probably performed by a stunt double.

Minnie Driver has never been more appealing, and she's got great chemistry with Cusack, and her Yank accent is again impeccable. Their interactions make for some stand-out moments. But then again I find that Cusack has great chemistry with everyone onscreen. His scenes with Ackroyd are marvelous, and I have to reiterate how pleased I was at Ackroyd's unexpected and very effective turn as the big bad. Cusack's real-life sister, Joan, has a nifty bit part as his assistant Marcella. I am become jaded at her history of excellent scene-stealing. I love how she takes these roles that could have been these unassuming roles and steers them down unexpected avenues. Lastly, Alan Arkin made me laugh out loud each time he was onscreen here. He plays Cusack's very, very nervous psychiatrist who finds himself constantly walking on eggshells during their sessions.

John Cusack anchors this thing. He's one of the few really interesting and quirky actors out there today whose movies I'll check out even if, going in, I don't what they're about. He's surpassed Tom Hanks as my favorite contemporary actor some time ago. I love the innate intelligence and the casual humor and the wry, detached approach he applies. It's fascinating watching Cusack work and how he manifests his internal process by virtue of body language and a repertoire of revealing expressions and by nuanced (yet deadpan) intonation. I don't know that there's anyone else out there who can better articulate the role of an assassin-for-hire who develops a conscience. John Cusack can play just about anything, except an idiot. I don't think he knows how to do that.

merry melindaReviewed in the United States on August 4, 2022
5.0 out of 5 stars
Good movie, great sound track
Verified purchase
Great plot, beautiful stars and Fantastic sound track . I saw it when it hit theaters, it brings back a lot of memories.

Caveman DanReviewed in the United States on August 1, 2022
5.0 out of 5 stars
One of my favorite movies
Verified purchase
Great sound track. Funny premise. Great cast! Good action scenes but not too over-the-top.

A customerReviewed in the United States on July 30, 2011
5.0 out of 5 stars
Outstanding bluray edition
Verified purchase
*** updated 2/7/15: now out on blurary, the transfer is great and worth buying even if you already own the DVD. Still, no bonus features of any kind to speak of ***

A black comedy about an ex-CIA, now hitman for hire is a perfect vehicle to showcase Cusack's talents. The world is changing, and as Martin Blank will tell you, countries no longer matter and people are just as likely to be killed over soda pop formulas than political ideology. Martin tries to rationalize the "moral flexibility" that he sees going on in the world, where market-driven globalization means more than patriotism to one's own country, by saying he at least has SOME scruples (for example, he won't take out a hit on a Greenpeace activist).

But only 10 year removed from high school, he's not entirely OK with his new profession. Some of the funnier side stories involve trips to his psychiatrist (Alan Arkin), who wants to drop him for a client. Blank won't let him, and dryly points out some logical reasons he should be treated, but then also casually states "and of course, I know where you live".

When Martin goes back home to Michigan for his 10 year High School reunion he has to face several people who have no idea what he does for a living, including old parents, old teachers, old friends, and old flames. Even when he tells the truth no one takes him seriously, including his buddy played by Jeremy Piven, in what many consider to be his break out role. Minnie Driver does an adequate job as the girl he jilted on prom-night to join the army, but there are a couple of forced scenes added to the movie for "date night" appeal where she is made to look fawningly at Martin that should have been left on the cutting room floor. Overall though, this is really a great supporting cast, with Hank Azaria and even Cusack's own sister as his deranged secretary who has a great scene arguing over a misplaced bullet order.

Much of the dialogue comes forth in a fast, rapid style that seems like he's exchanging gunfire in a high stakes shootout rather than talking. This is especially true when he deals with Dan Akroyd's character, who plays a rival hitman bent on trying to unionize all assassins. "Workers of the world unite!" "Will there be meetings?", Martin asks. "Of course!" Akroyd exclaims as the two continue to circle each other and mentally measure for body bags. Akroyd talks even faster than Cusack, and when the two of them get going the one liners come faster than you can process them. At one point he tells Blank to "Cut the string Chatty Cathy". When overdone it can get annoying, but for the most part is balances right.

Michiganders will especially like the movie, stocked with Detroit landmarks and Red Wings jerseys even though most of it was shot in Chicago and not Grosse Pointe. When he goes to visit his old childhood home and discovers it had been turned into a Ultie-Mart, local brands of Stroh's beer and Faygo pop are quickly shot up. Not sure if these were just product placements, a serious attempt to sell the geography, or a clever way to again showcase Martin's notion that the "McDonaldization" of the world is destroying a sense of place. They say you can't go back home, but you can make a fresh start in life and make a very funny and entertaining movie along the way. And afterall, who doesn't want to kill a bad ass Czech assassin in front of your old highschool locker with the help of a yearbook signing pen?
3 people found this helpful

PaulaReviewed in the United States on May 23, 2022
4.0 out of 5 stars
GREAT SOUNDTRACK!
Verified purchase
It's worth it just for the music alone. But yeah, it is a pretty fun flick. ("You're a handsome devil. What's your name?") I could do with a little less gratuitous gunfire, but that's just me.

HavenReviewed in the United States on May 16, 2022
4.0 out of 5 stars
The tone of this filn is unique!
Verified purchase
A bloody, death-and-mayhem filled comedy. As I said in the headline...a very strange razor edge to walk, but they pull it off to great effect! Dan Akroyd is insane in this film!

Normal GuyReviewed in the United States on May 29, 2022
5.0 out of 5 stars
Seriously underrated.
Verified purchase
This is easily one of my favorite movies, and probably my favorite romantic comedy. Minnie Driver has NEVER been more adorable and lovable, and John Cusack is his typical frazzled self, only he's also a super dangerous assassin, and strangely the pairing worked perfectly for him.
I put it up there with Hi-Fidelity 1408 as far as Cusack's films go, it's a truly fantastic rom-com.
One person found this helpful
See all reviews
Back to top
Get to Know Us
Make Money with Us
Amazon Payment Products
Let Us Help You
EnglishChoose a language for shopping. United StatesChoose a country/region for shopping.
© 1996-2022, Amazon.com, Inc. or its affiliates