Grumpy Monkey and millions of other books are available for Amazon Kindle. Learn more
Share 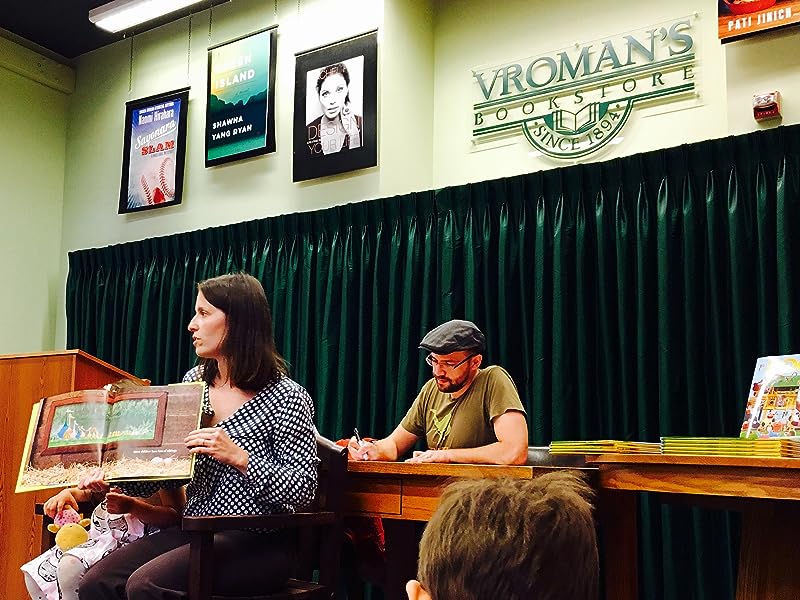 "Max Lang’s bright watercolors of animals doing their thing are winning accompaniments to the narrative’s welcome message that it’s OK to be down sometimes." —School Library Journal

"Suzanne Lang's encouragement to sit with your emotions (thus allowing them to pass) is nearly Buddhist in its take, and it will be great bibliotherapy for the crabby, cranky, and cross. Oscar-nominated animator Max Lang's cartoony illustrations lighten the mood without making light of Jim's mood; Jim has comically long arms, and his facial expressions are quite funny." —Kirkus Reviews

"Crisp illustrations featuring a broad cast of animated, boldly colored animals against white backgrounds (except a bright red page when Jim really loses it) will draw readers into Jim’s situation until the reassuring outcome. Although their helpfulness is part of the problem, the animals are enthusiastic, kind-hearted souls trying to be good friends." —Booklist

"A monkey learns to ride out a wave of emotion in this reassuring picture book about feelings." —Publishers Weekly

Suzanne Lang is the author of the New York Times bestselling Grumpy Monkey, as well as several other titles. When Suzanne is not working on books, she writes and produces children's television.

MAX LANG is an animation director, storyboard artist, character designer, and illustrator. He codirected the adaptation of The Gruffalo, which was nominated for an Oscar and a BAFTA, as well as the adaptation of the picture book Room on the Broom, which has won numerous awards including the Cristal for Best TV Production at this year's Annecy Animation Festival.

Read more
Start reading Grumpy Monkey on your Kindle in under a minute.

4.8 out of 5 stars
4.8 out of 5
2,007 customer ratings
How does Amazon calculate star ratings?
Amazon calculates a product’s star ratings based on a machine learned model instead of a raw data average. The model takes into account factors including the age of a rating, whether the ratings are from verified purchasers, and factors that establish reviewer trustworthiness.

C. Biewald
5.0 out of 5 stars If you buy one book for a child, make it this one!
Reviewed in the United States on October 18, 2018
Format: HardcoverVerified Purchase
As a school librarian, health and wellness teacher, voracious reader, and grandmother, I often think about reviewing a book, but there are so many other things to do. I HAD to write about this one. The message is powerful and communicated in a humorous, undidactic manner, in large part thanks to the deeply appealing, funny and poignant illustrations. It would be hard to find someone who couldn't relate to Jim Panzee. I LOVE this book.
Read more
338 people found this helpful
Helpful
Comment Report abuse

Dazy Daisy (univ professor)
5.0 out of 5 stars This is a lovely and important book for children.
Reviewed in the United States on January 6, 2019
Format: HardcoverVerified Purchase
I wish I had had this book as a child. I think it's important for children to learn that it's fine to "have moods" or "be grumpy." It's OKAY for children--and girls especially--to not have to "please" all the time or always be "on." I am getting this book for all children under 10 that I know. 10 might be a too-advanced upper limit. Lovely illustrations. Thumbs up.
Read more
136 people found this helpful
Helpful
Comment Report abuse

obsessive shopper in denial
5.0 out of 5 stars Super cute and amazing artwork!
Reviewed in the United States on September 25, 2018
Format: HardcoverVerified Purchase
The art instantly drew me to this book. I’m a storyboard artist myself and really appreciate the simplistic yet expressive drawing. It’s adorable and a cute read. Excited to read this to my baby niece once she starts talking.
Read more
109 people found this helpful
Helpful
Comment Report abuse

Louwho
2.0 out of 5 stars Disappointing Message.
Reviewed in the United States on December 18, 2019
Format: HardcoverVerified Purchase
I understand the message this book is conveying. I do. It's ok to be you, and you won't always be happy. I get that...but the way this story is portrayed is very disappointing.
I bought this for my 7 yr old niece who was born with a hole in her brain. She is mentally and physically handicapped, not in ways you'd notice right off the bat but she is definitely a very grumpy child who is more irrational than most, if you can even imagine that.

The story line for this book is very disappointing, for one reason. It starts out with a grumpy Jim. He's grumpy & doesn't know why. He essentially lashes out to all his friends in the jungle who are trying to help him feel better and turn around his mood, then runs off on his own feeling bad about being mean to his friends....and that's really it! HE NEVER APOLOGIES to his friends who were just trying to help him! To me that sends such a bad message. You can send the message, it's ok to be grumpy sometimes but still be respectful to your friends or at least show that it's wrong to lash out! Very disappointing message here. I'm hesitant to even give this book to my niece. Not sure if I'll be keeping this one, it just doesn't seem like a right fit to me.

The book itself, is very well constructed. It is definitely not a cheap book by any means. This seems like the quality of something you'd buy at Barnes & Noble but spend $30 instead of $10. The illustration isn't that great. It starts out with very vibrant colors but quickly dulls down to flat and dark colors for mostly the remainder fo the book.

Overall, I'm very disappointed with this book because of the message it sends. They had a great opportunity to show that sometimes you need to apologise for being mean when you're grumpy.

MichiganGal3
5.0 out of 5 stars Everyone has a grumpy monkey day
Reviewed in the United States on November 11, 2018
Format: HardcoverVerified Purchase
This is a great book for children and adults alike. Great message about feeling feelings, and being a good friend.
Read more
62 people found this helpful
Helpful
Comment Report abuse

hotwheels71
5.0 out of 5 stars Instant favorite
Reviewed in the United States on December 2, 2018
Format: HardcoverVerified Purchase
We've had this book for only a few days and I've already read it about 25 times... my almost 2 yo daughter loves it! This instantly trumped all of her other favorites. Its a cute story and message and the illustrations are great. I do enjoy reading it... just not so many times in a row!
Read more
49 people found this helpful
Helpful
Comment Report abuse

Frank A
5.0 out of 5 stars Great children’s book
Reviewed in the United States on September 16, 2018
Format: HardcoverVerified Purchase
My two year old daughter LOVES to read along with this book, and mimics the grumpy faces in the mirror.
Read more
47 people found this helpful
Helpful
Comment Report abuse
See all reviews from the United States

Christine Ching
5.0 out of 5 stars It’s ok to be..... grumpy
Reviewed in the United Kingdom on January 15, 2020
Format: HardcoverVerified Purchase
This is a very lovely book. The message behind really sink into my girl. Bigger book which is easy for two of us to read together.
Read more
Helpful
Sending feedback...
Thank you for your feedback.
Sorry, we failed to record your vote. Please try again
Report abuse

quicktakes
5.0 out of 5 stars Amazing!
Reviewed in Canada on March 4, 2020
Verified Purchase
Amazing book! Animations are great, story is amazing. I now buy this for everyone I know who has a baby.
Read more
Helpful
Sending feedback...
Thank you for your feedback.
Sorry, we failed to record your vote. Please try again
Report abuse

MK
5.0 out of 5 stars Amazing book to tell children how to handle upset
Reviewed in India on October 20, 2018
Format: HardcoverVerified Purchase
It is ok to be upset a while is something we may want to tell children that could enable them to handle their emotions better than holding it all up. This book with superb illustration makes it all easier.
Read more
Helpful
Sending feedback...
Thank you for your feedback.
Sorry, we failed to record your vote. Please try again
Report abuse

LC
4.0 out of 5 stars Cute Story
Reviewed in Canada on August 18, 2018
Format: HardcoverVerified Purchase
Sometimes we all feel grumpy and that'a okay. It nice to know that friends are there to support us.
Read more
Helpful
Sending feedback...
Thank you for your feedback.
Sorry, we failed to record your vote. Please try again
Report abuse

Giulia
5.0 out of 5 stars It is an ideal gift for children and for everyone who love stunning illustrations
Reviewed in Italy on October 25, 2018
Verified Purchase
This book is beautiful! The story is adorable, the illustrations are amazing and the binding and the paper are really good quality. I'm really happy with this product
Read more
Helpful
Sending feedback...
Thank you for your feedback.
Sorry, we failed to record your vote. Please try again
Report abuse

Cherry
5.0 out of 5 stars Very good book
Reviewed in Germany on January 1, 2020
Format: HardcoverVerified Purchase
I love the book and the way it’s written. The pictures are also really cute.
Read more
Helpful
Sending feedback...
Thank you for your feedback.
Sorry, we failed to record your vote. Please try again
Report abuse