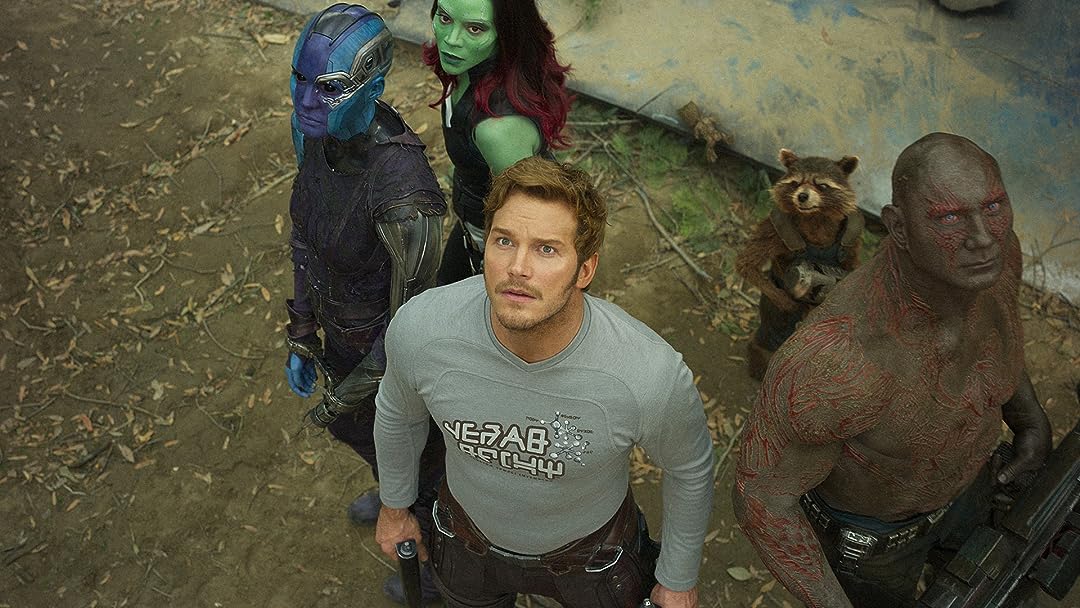 Guardians of the Galaxy Vol. 2 (Theatrical)

(32,648)
7.62 h 15 min2017X-RayHDRUHDPG-13
Set to the sounds of Awesome Mixtape #2, Marvel Studios’ Guardians of the Galaxy Vol. 2 continues the team’s adventures as they seek to unravel the mystery of Star-Lord’s parentage.

Alex BeyerReviewed in the United States on April 7, 2018
5.0 out of 5 stars
Movie is great, NEVER buying Amazon Digital again
Verified purchase
I love the movie but didn't realise when you drop $15 on a digital copy you don't get to store it on your pc and download it. This would be a non-issue if Amazon's streaming service wasn't complete garbage. Also means, if they take the movie off the server, you don't have it anymore. Great. Good movie, I connected more to it than the first. Loved rocket (have a thing for raccoons) and the way they fleshed him out more. Better movie overall than the first and another rare Marvel movie that does more than the others and stands out from the formula just enough to make you notice. Not as ambitious as Ragnarok, but more personally relatable.
67 people found this helpful

Kindle CustomerReviewed in the United States on September 1, 2017
5.0 out of 5 stars
Better with supporting cast breaking out.
Verified purchase
Unlike most sequels, this is better than the original. The main characters have grown into their parts, but the best part is how supporting characters add texture, humor, and interest to the whole. The best parts are Yondu, Rocket, and Baby Groot.

I resisted watching the original movie for a long time, not so with Vol 2. Don't wait. See it often and make sure you have a copy to stream. It never gets old, just keeps getting better with each re-watch.

Mike Billington author of Murder in the Rainy SeasonReviewed in the United States on May 25, 2018
4.0 out of 5 stars
A good attempt to mix comedy and drama
Verified purchase
It is difficult to strike just the right balance between comedy and drama in the same film; so difficult that most writers and directors don't even attempt it.
"Guardians of the Galaxy: Volume 2" comes very close to striking that balance but falls a little bit short.
The plot is convoluted - which is not necessarily a bad thing - so there is room for both humor and pathos in the body of this movie. There is also plenty of action to bridge the gaps between those parts of the film that are aimed at making us laugh and those scenes that are designed to give us a lump in our throats.
I'm not going to go into great detail about the plot because that could spoil the film for those that have not yet seen it, but I will say that Peter Quill and his misfit crew are just trying to make a living doing jobs for various planets as they flit about the galaxy. They battle an inter-dimensional space monster on one of those jobs and then get into trouble with the leader of that planet... so much trouble that she sends a fleet of spaceships after Quill and Co. The result: More trouble as Quill's former Ravager companions set out to find him in exchange for a huge reward.
In addition, Quill finally connects with his missing father - a man (?) he never knew.
That doesn't go quite as well as either of them might have hoped, however.
The special effects are on a par with other Marvel films, which is to say they are spectacular. The ensemble cast, headed by Chris Pratt and Zoe Saldana is excellent and the direction is pretty smooth given the complex script.
Where the film falls short, in my opinion, is that it tries to cram too many pieces of candy into the jar. As a result, it's easy to get distracted as you watch the Guardians fight to not only save the galaxy but stay alive in the process.
For that reason, I give this film 4.5 stars instead of 5.

BBReviewed in the United States on May 6, 2021
2.0 out of 5 stars
Both movies are irritating and do not hold up
Verified purchase
I think of myself trying to watch this movie a second time and having to hear that cringy horrible reciting of lyrics by Russel to his Mom, and the song itself is just grating and horrible 70's bad songwriting, and don't get me started on Russel looking "young" and all the Ego CGI fights and Pratts horrible acting and the ridiculousness, and Russel was also really bad, I didn't buy anything he did in that movie. Ugh. Gunn is a hack director, verified by the fact he killed off Groot in the first movie because they had no other ending, killing off the best, most powerful by far character in a very boring "super team" with no powers that they display because Gunn is a hack. Drax was a super scary killer in the first 5 minutes of the first movie, then he was a stabby one liner machine clown who hardly did anything against Thanos, or anyone that mattered for 4 movies. He stabbed his way out of that idiotic looking monster at the beginning, and it was so stupid if you had a brain you would be insulted someone came up with that stupid chit, with baby Groot running around looking like a cartoon, just horrible. Ronin was so stupid looking it hurts, he is supposed to be 10 feet tall, bigger than Thanos or Hulk and we get some guy with crap smeared on his face and an absolutely stupid looking hoodie for a costume, and Pace just sounded stupid trying to be scary. I could go on. Gamora? Rocket? Yawn. Who cares. Starlord with his stupid jet boots and his helmet and ray gun? Its just dumb, and the only reason these movies were made was because they had no right to FF. Groot could have been epic in Infinity and Endgame, they weren't even smart enough to bring him back for the ending somehow. Nope, we get crippled "professor hulk" who also did nothing in that movie. So many mistakes one after another. Hulk did NOTHING against Thanos, massive fail, Russo brothers or Feige or whoever. We'll get stuck with another poorly directed disaster from arrogant Gunn, who talked up his great taste in music and those songs he picked to highlight in these movies are as terrible as it gets. I do not even want to think about them. Another example of how stupid this movie is, Gamora, who I guess is super strong and invulnerable, or something, we never heard anything about what they could do, and when they are dragging Drax and she is holding him they show her strength, I guess, but its all just so pointless. These movies are TERRIBLE, by far the worst Marvel has put out. DO NOT let James Gunn ruin FF.
3 people found this helpful

R. JimenezReviewed in the United States on November 22, 2017
5.0 out of 5 stars
Movie was great follow-up to part 1
Verified purchase
Movie was great follow-up to part 1. I felt like it was a little too mushy in relation to the "Star-Lord finding his long lost father". It was a good build up and reveal. But I felt like that took up more time than it should have. I get that they make movies to appeal to a broader spectrum of people aside from the Marvel crowd so they beefed it up in that aspect. But it was more obvious in this movie, especially with the extra Drax comedy relief moments. The scenery was amazing, character development was great, only real complaint was Rocket going backwards in a sense of achievement and attitude. They just made him sort of a jerk in the movie and his solitary action created a big ordeal. Overall still wouldn't kick this movie out of my collection by any means as is still has great replay value. I hope part 3 brings it all together and really makes this series the gold standard for action/comic book movies.
19 people found this helpful

joel wingReviewed in the United States on May 13, 2020
5.0 out of 5 stars
2nd Guardians deals with fathers siblings and family w/usual mix of music comedy action
Verified purchase
The second Guardians of the Galaxy started off right where the first movie left off. There was still the mix of music, comedy and action. This volume focused upon family. First there was the relationship between Quill (Chris Pratt) and his newly discovered father Ego with a brilliant casting choice of Kurt Russell, and then the ties between Quill and Yondu (Michael Rooker) who raised him. Secondary to that was the sibling rivalry between Gamora (Zoe Saldana) and Nebula (Karen Gillan). Finally, there was the idea that the Guardians were a family.

The start showed the audience that Volume 2 was going to be just like volume 1. Rocket is making fun of Drax, a giant beast shows up, music starts blasting and Groot dances away while chasing after small little insects and rodents. He you have the comedy the action and the characters.

The movie then sets up a comparison between the two father figures. Ego saves the Guardians from destruction by a group called the Sovereign. He then announces himself to the surprise of Quill. On the other hand, Yondu is rejected by his group the Ravagers because he was smuggling kids for Ego. That in fact, was how he found Quill. Hence, one (Ego) is perceived as a hero, and the other (Yandu) is a criminal. The story will then reveal whether these were true characterizations or not.

In the end, the movie resolves these stories on a rather heart warming note.

ORIONReviewed in the United States on August 12, 2017
5.0 out of 5 stars
I'M MARY POPPINS Y'ALL !
Verified purchase
Even though the first movie was awesome, I'd have to say Vol. 2 was better. The music was definitely better in Vol. 1, though.

Yondu stole the scene with that line, "I'm Mary Poppins y'all!" Hilarious!

Plenty of action, great comedic scenes, and some good character development. Story was interesting as well.

I see critical reviews about the story being "light", "boring", "okish". It reminds me of my friend who felt the same thing about Star Wars. Or, how executives at FOX decided to cancel "Firefly".. These people don't connect emotionally to the movie "experience". They're more like "thought entities", deconstructing and appreciating it, on how it agrees with their thoughts.

Interestingly enough, the story kind of delves into that. On whether existence is better with "meaning" and "purpose", or better experienced with "heart".

It's that line from "Jerry Maguire", from Dicky Fox, "If this is empty (heart), this (head) doesn't matter."
13 people found this helpful

Aviator MarioReviewed in the United States on January 18, 2018
3.0 out of 5 stars
Enjoyable but a bit less fun than Vol. 1
Verified purchase
Somewhat less fun than the first one, doesn't quite live up to high expectations. Solid performances by the main cast. Michael Rooker as Yondu steals every scene he's in with his usual intensity. Kurt Russell is a blast as always. The script and plot were a letdown compared to Vol. 1. Excellent effects as always. Soundtrack didn't disappoint.
17 people found this helpful
See all reviews
Back to top
Get to Know Us
Make Money with Us
Amazon Payment Products
Let Us Help You
EnglishChoose a language for shopping. United StatesChoose a country/region for shopping.
© 1996-2022, Amazon.com, Inc. or its affiliates