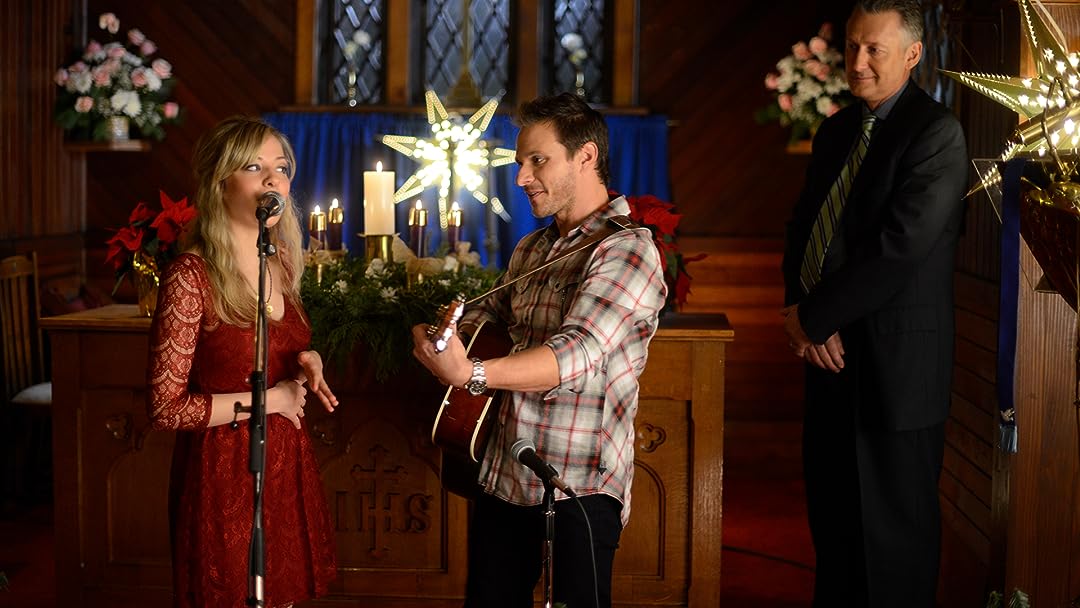 Guess Who's Coming to Christmas

(228)
1 h 24 min2013X-Ray7+
To repair his tarnished image, a jaded rock star publicly decides to fulfill a child's "Dear Santa" Christmas wish. After reluctantly agreeing to spend the holidays in a small town and perform in the local holiday Christmas concert, he's mortified at the prospect of staying in the home of an idyllic, close-knit family, but he soon realizes the true value in the holiday spirit.

meReviewed in the United States on December 19, 2021
3.0 out of 5 stars
COULD HAVE BEEN GREAT, BUT FELL DOWN THAT RABBIT HOLE OF PREDICTABLE BOY GETS GIRL ENDING
Verified purchase
NOT A COMEDY, BUT STARTS AS A TRAGEDY. A lot good about this, but it pretends to have some kind of biblical theme. Alcoholic rock star tries to sabotage his own life and gets sucked into the home of a pastor and his family. He hopes to make some good press to distract from his bad press and he ends up in a small town getting tough-loved by the family which helps him get off his destructive path and he and the girl write a song. Then he gets sucked back to New York to a performance and his gold-digger girlfriend spends some more of his money and he dumps her, ditches the performance and goes back to the family in the small town. Then he gets the girl after the church family helps to restore his faith - in himself and he kisses the girl passionately for a little bit at the front of the church and they sing their song about the rock star during the church service on Christmas. Rock star announces he's going to buy a house and move to this small town. This film was a bad joke, very strange. I get the feeling someone wanted to make this film about restored faith in God and someone else cut all that out to make the film less preachy.
One person found this helpful

H. ChristopherReviewed in the United States on January 13, 2021
4.0 out of 5 stars
Surprisingly good.
Verified purchase
I turned this on for the cats and dogs as background noise while I went about my day, but found myself watching after a while, haha. I didn't have my hopes high at first because the font they use is f'ing terrible, the Os read like As, haha "marning in New Yark" kind of stuff, haha. They also had a blurred out magazine page on a wall in one early scene, haha, like come on movie, get the rights to use a page, or just literally MAKE ONE UP really quick. From those couple little things, I was like "naw"... but as I listened, I found myself turning around more and more until I just ended up watching it. It was actually really good. It's definitely a cheesy, if not very cliché, kind of Hallmark style film. But that's okay, sometimes they hit the spot. And for it's budget, this is a solid 4 stars.
2 people found this helpful

AmirwinReviewed in the United States on November 7, 2014
4.0 out of 5 stars
Enjoyable movie
Verified purchase
I'm so glad this is being made available on DVD this year. I love Christmas movies, even cheesy ones, but too often the Christian faith (not just angels or "good deeds") is hard to find. I'm a Christian but even I don't like preachy movies. This one represents a family of faith who is represented as a normal family and not a goofy stereotype that Hollywood likes to give us. My copy is already preordered!
40 people found this helpful

Michael WilhelmiReviewed in the United States on December 5, 2020
5.0 out of 5 stars
A Christmas movie worth watching.
Verified purchase
Wow--a Christmas movie that is way beyond a Hallmark Christmas movie.
Lets make a list--
--Dad sets the rules and enforces them--not to many dad's do that today.
--Dad admits he is wrong--right when he realized he was wrong-- again not done very often even when I was a child.
--Dax finds redemption.
--Dax stuck to his gun's and doesn't melt down like so many movies today do with the father figure.
--The storyline was a little predictable but made up for it with the strong moral values.

AnnieReviewed in the United States on December 20, 2014
4.0 out of 5 stars
Good with some little flaws
Verified purchase
I thought it was a fun movie with a little bit different twist than most Christmas movies. However, I must disagree with some of the reviews. I am a Christian and I thought in the beginning the minister was rather rude to the guest. Also I thought in the beginning he was very pushy like telling him to sing at church rather than asking him for example. The mother should have had a stronger part. She was likable but pretty plain vanilla. I do think that half way through they started setting the example and allowing the star to find his way. Good ending and left you feeling good. However, wouldn't it be a better ending if the song was less romantic (especially for church) and more about turning your life around or not giving up, etc.?

All and all its enjoyable and 'll probably watch it again next year!
15 people found this helpful

Ann L.Reviewed in the United States on January 2, 2016
3.0 out of 5 stars
Sweet Story about a Star who Finds Himself
Verified purchase
Very, very sweet story that was lighter on the 'star' aspect than I would have really liked. The story is really not about Dax being a star, it's about Dax the star remembering he's a regular person. The story itself was definitely on the syrupy side -- perfect for Hallmark. A minister's daughter moved back home after losing her job, a contest, a crush, a win, and a celebrity remembers what he was before he became so jaded.

I really felt like the story was trying to do so much, and that it didn't really accomplish it all. I did have some plot questions as the story played out. For instance, there was a story about the local club closing without money, and the concert was to raise money, but that sort of fell to the side. The whole 'crush' aspect wasn't really dealt with beyond being mentioned a couple of times, though there was subtext about how Kelly had grown out of that and saw him as a human. The entire contest was, I'd thought, to fulfill a child's wish, but Kelly was 26, and that was never something that was addressed. (Or maybe I missed something in the story...)

There were some "darker" elements -- curfew busting, Dax's drinking, him 'dating' Kelly while having a girlfriend -- that seemed to push the boundaries of what was essentially a very wholesome story. They were handled with care and respect however, as were the relationships between the Harding kids and their parents, their family traditions, and even Dax's previous not-so-great choices. There were a lot of great elements to the story, and I think that it's at least worth a watch if the blurb interests you.

That all said, I really, really would have liked to have had more 'star' aspect to the tale, but that really wasn't what the movie was about. It wasn't clear about that going in, so I do want to mention it. It was a good story, and I liked what it was with my few plot quibbles, but it wasn't really the story I was hoping to find, even though I did enjoy watching it.
3 people found this helpful

Amazon CustomerReviewed in the United States on December 21, 2020
5.0 out of 5 stars
Great Family Movie
Verified purchase
I love when they show the boom mic in the behind the scenes of the film (which happens during the film) it really made you aware of this society we live in as it takes you out of the film and it reminds you that you are just the audience takin a glimpse into this written world.

Sales taxes are most important revenue for the state sin India. While the taxes vary in their design, they are generally levied in the first point…show more content…
List III is a concurrent List, which includes administration of justice, economic and social planning, trade and commerce, etc. According to Article 246, Seventh Schedule, Parliament has exclusive powers to make laws regarding matters enumerated in List I, not withstanding the provisions of the other clauses of this Article. On the other hand, the Legislature of any state has exclusive power to make laws for the state regarding any of the matters enumerated in List II, subject to other clauses[5]. With regard to List III, both the Parliament and a State Legislature can make laws but the law listed in I or III, vests with the Union. Thus, the Union has supremacy over a wide range of the legislative field. These lists include the powers of taxation also. The union List includes among others, taxes on income other than agricultural income, excise duties, customs and corporation tax. The State list includes land revenue, excise on Alcoholic liquors, tax on agricultural incomes, estate duty, taxes on sale or purchase of goods, taxes on vehicles, on professions, on luxuries, on entertainment, on stamp duties, etc. the concurrent list does not include any important taxes.

FernReviewed in the United States on December 30, 2020
4.0 out of 5 stars
Good Story Line - not sappy
Verified purchase
After watching lots of Christmas movies, I'm always in search for one that is a little different. Something with some substance and relatable. This is one of those. It has the feel good parts but also deals with other issues. It's too bad they don't show how to get through those issues - it's just glossed over. The religious message is a little heavy handed and that can be difficult for some to watch. Acting is top notch.
See all reviews
Back to top
Get to Know Us
Make Money with Us
Amazon Payment Products
Let Us Help You
EnglishChoose a language for shopping. United StatesChoose a country/region for shopping.
© 1996-2022, Amazon.com, Inc. or its affiliates