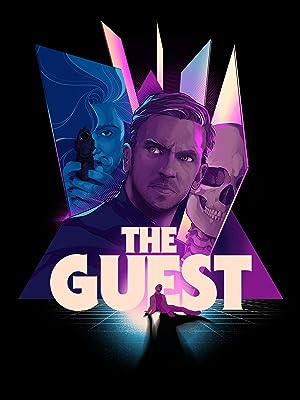 (2,880)
6.71 h 40 min2014X-RayHDRUHDR
A mysterious ex-soldier (Dan Stevens) with a secret agenda wreaks havoc on a small town in this "impossibly cool" (Fangoria) action thriller from the creators of You're Next.

astrahlReviewed in the United States on May 8, 2020
5.0 out of 5 stars
Came here for Dan Stevens
Verified purchase
I was ready for and expecting a thriller and got a something unexpected.

IMO, Dan Stevens likes to toy with quirkiness and I'm here for it. This started out serious and fell into a familiar but fun stab at camp (no pun intended). You get the feeling that it takes itself seriously but ... doesn't? What you think is going to happen, totally happens and I was still so happy how it happened. I KNEW what was coming next but sat here wide-eyed waiting for it all to happen.

The cast all did a great job but I totally loved Stevens in this. He's being overlooked and underrated for some reason. We know he is a great actor, we know he's got The Look ™, and he's got a great and growing resume. At this point, if he's in it, I'll buy a ticket.

AnnaReviewed in the United States on July 8, 2017
5.0 out of 5 stars
I Could Keep Watching This Multiple Times
Verified purchase
I was recommended this movie, and at first I wasn't sure. Now that I've watched it, I'm so happy I did. It was amazing. The whole thing was just super entertaining. It wasn't what I expected because it looks one way and sort of becomes something else. I really appreciated a lot of the great lines. There was a lot of subtlety in the character development and emotions. It's a movie that I think shows more than it tells so you need to pay attention and be open to what it's doing. Some things might seem ridiculous if taken too seriously, but really they are amazing moments if you're not. The acting is top notch and the story is really interesting. The ending was amazing.
27 people found this helpful

Safety SteveReviewed in the United States on December 4, 2021
5.0 out of 5 stars
Fun psychological, action, thriller flick!
Verified purchase
I have enjoyed this film ever since I first saw it. I have the US DVD and the German Mediabook release but was excited to see it get the deluxe treatment from Second Sight. If you enjoy odd little films that combined different Genres with a twist you might enjoy this one. It’s on the same level as You’re Next, The Collector, and The Collection.

The Blu Ray looks fantastic and the packaging and booklet are nice. I don’t have a 4K UHD player but I bet it looks even better.

Be aware that the Blu Ray is region locked and will not play on standard US players. It requires a multi-region player.

All of that said, I ended up returning my copy to Amazon Global because it was only packed in a light cardboard “envelope” for international travels and arrived damaged. I had to purchase it elsewhere to ensure it was shipped in a protective box. So 5 stars for the film and the deluxe treatment by Second Sight but only 1 star for Amazon Global treatment of international orders.
One person found this helpful

MadsjchicReviewed in the United States on March 27, 2017
5.0 out of 5 stars
Would totally watch this again
Verified purchase
This movie hit all the right notes. I actually think the ending made this movie. It could've definitely been forgettable, but the tone of the movie changes as you go through, and it never really slows down enough for you to roll your eyes. I felt like I was watching one of those good 80s movies in the slasher horror genre before it became a trope.
.
.
.
Also, um, dang, same Anna. I would need a minute after seeing him come out of the shower, too.
16 people found this helpful

JimmyRReviewed in the United States on September 8, 2020
1.0 out of 5 stars
L - A - M - E!
Verified purchase
Even 1 STAR is too much for this LAME, LAME, SUPER LAME flick. A poor man's Bourne Identity gone bad. Terrible acting, terrible production, a cliche of a cliche of a cliche of everything bad in a really bad movie. Even a high school film production would be a contender. This film...was very disappointing--even at $2.49 rental. The only good thing about it is Moriarty, NM as background; otherwise, an absolute WASTE OF TIME.
3 people found this helpful

Raymond TerryReviewed in the United States on June 18, 2018
5.0 out of 5 stars
Unexpectedly Awesome / Don't judge a book by its cover
Verified purchase
As a recent fan of Dan Stevens, this was recommended to me the weekend before this review goes up. I saw that Amazon had the Blu-ray for reasonable price so I ordered it. The cover makes the movie looks like any other drifter with gun movie. After watching it, The Guest is far more than a "person ingratiate's themselves to their surroundings for nefarious reasons" kind of movie. It has humor, shockingly good action scenes, and horror elements that work surprisingly well. This is a well crafted drama that should be seen by more people.
5 people found this helpful

No NameReviewed in the United States on January 19, 2022
1.0 out of 5 stars
C-- grade direction, story, and acting
Verified purchase
I can not believe this movie had 6+ rating on IMDB and 4/5 user stars.

The only interesting thing about this movie is story that about some secret military op where they manipulate behavior of soldiers. BUT THAT IS NOTHING NEW.

Don't waste your time.
One person found this helpful
See all reviews
Back to top
Get to Know Us
Make Money with Us
Amazon Payment Products
Let Us Help You
EnglishChoose a language for shopping. United StatesChoose a country/region for shopping.
© 1996-2022, Amazon.com, Inc. or its affiliates