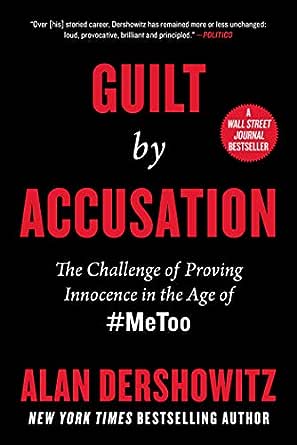 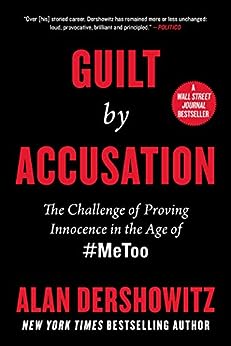 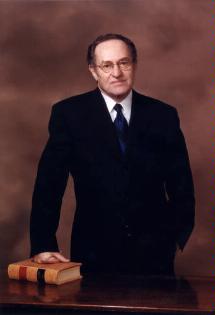 Guilt by Accusation: The Challenge of Proving Innocence in the Age of #MeToo Kindle Edition

PRAISE FOR GUILT BY ACCUSATION

The Accusation
“[T]he totality of the evidence found during the investigation refutes the allegations.”—Louis Freeh, Former Director of the FBI

[She Is] “Wrong… simply wrong.”—David Boies, lawyer for accuser

The Book
"In Guilt by Accusation, Alan Dershowitz continues a lifetime of work in addressing the toughest issues of our time with integrity, a sharp, clear-eyed analysis, and unbending principle. Prof. Dershowitz, a man of principle and integrity, employs reason as his North Star, and refuses to be silenced by the loudest voices in the room."—Ronald S. Sullivan Jr., Harvard Law School

“Alan Dershowitz reminds us that popular mod passions and fashions can turn the blameless into public pariahs.  Accused by a woman he never met, he presents a compelling argument that he was framed for money.”—Lucinda Franks Morganthau, Pulitzer Prize writer

The Author
“The truth has no greater defender than Alan Dershowitz.”—Benjamin Netanyahu

“In 50 years of working with Alan Dershowitz, I have never met a more principled or honest advocate for truth.”—Irwin Cotler, Former Attorney General and Minister of Justice, Canada

“There are great legal minds; there are those who can also communicate well on television; then there is Dershowitz. The professor is uniquely capable of arguing a position, while putting a premium on legal and ethical legitimacy, not its popularity. Bravo, Dershowitz!”—Chris Cuomo, Anchor And Reporter, CNN

“Anyone interested in the true merits of criminal law and very fine writing must read Alan Dershowitz’s book.”—Truman Capote

“Love him or hate him, Dershowitz has lived a life that matters, hugely and enduringly. He is a man in full at a time when most of us aspire to be little more than a presence on Twitter.”—New York Times Book Review

“Courage and principle are rare today. Professor Dershowitz has them both.”—Senator Ted Cruz

Alan Dershowitz is one of the most celebrated lawyers in America. He was the youngest full professor in Harvard Law School history, where he is now the Felix Frankfurter Professor of Law, Emeritus. The author of numerous bestselling books, from Chutzpah to The Case Against Impeaching Trump to The Best Defense to Reversal of Fortune (which was made into an Academy Award–winning film) to Defending Israel, Dershowitz has advised presidents and prime ministers and has represented many prominent men and women, half of them pro bono.

4.6 out of 5 stars
4.6 out of 5
324 customer ratings
How does Amazon calculate star ratings?
Amazon calculates a product’s star ratings based on a machine learned model instead of a raw data average. The model takes into account factors including the age of a rating, whether the ratings are from verified purchasers, and factors that establish reviewer trustworthiness.
Top Reviews

Blaise Wagner
5.0 out of 5 stars Casts Doubt on the Me Too Movement
Reviewed in the United States on November 19, 2019
Format: HardcoverVerified Purchase
In 113 pages, this book describes how it is that the author, Alan Dershowitz, could be accused of having trafficked sex with Virginia Giuffre in spite of the knowledge of both the accuser Giuffre and her lawyers that the accusations were false.

The tactic is mostly unknown to non-lawyers. It is called litigation privilege. When filing a suit, a plaintiff can make a charge, say of inappropriate sex, to a third party, and is protected from defamation lawsuits by this privilege. On the other hand, the accused may be sued in court if he denies the false claims.

This asymmetry in rights can make it virtually impossible for the accused to defend himself with the simple statement, "I'm innocent," without risk of being sued for defamation. And defense against such a suit entails considerable cost, which may prevent a meaningful defense.

Dershowitz explains how this is justified by the legal system, but points out that it is subject to abuse in the age of Me Too, in which woman accusers are often believed without needing to present evidence.

Thus Virginia Giuffre, and two other accusers of Jeffrey Epstein, seem to have fabricated stories of encounters with Dershowit. For example, Virginia Giuffre has claimed that Dershowitz had sex with her at various specific locations on seven occasions, and Dershowitz claims that he has records showing he was not in the locations in all but one case. In that case, both were present in New York City at a given point in time, but that is a huge area and there is no evidence of their ever meeting.

Yet the media have portrayed Alan Dershowitz as a pedophile, and have prevented him from appearing on various network television programs and canceled invitations for him to speak.

Dershowitz also suggest that the lawyers for the accusers were trying to shake down Leslie Wexner for a big payoff to keep silent about what they knew.

In today's atmosphere an allegation of sexual impropriety can destroy a career. Along with Dershowitz, Giuffre has accused Prince Andrew of England of having sex with her.

A troubling dynamic then takes over. Scandals of the royal family sell lots of newspapers. And newspapers want high circulation. So they fail to fact check stories to satisfy readers who want salacious stories.

Or maybe they think that an accusation that is shielded by litigation privilege can be accepted as proven fact, even if the lawyers who made the accusation have no intention of pursuing it in court.

This seems to have been the case with writer Julie Brown of the Miami Herald, who wrote many of the stories about Jeffrey Epstein's "sex slaves" that were then copied elsewhere.

Julie Brown was even put forward for a Pulitzer Prize.

This might be part of a larger problem which accepts claims of inappropriate sex against famous men as accepted fact, with inadequate fact checking.

The charges in this book are explosive. At the very least they should cause people to question the wisdom of some of the assumptions made by the Me Too movement, such as "women can never lie."

Kindle CustomerR Graeme
5.0 out of 5 stars BRAVO
Reviewed in the United States on November 26, 2019
Format: Kindle EditionVerified Purchase
A great eye-opener on the very real threat that has come with "believe the accuser." Alan has taken this travesty head-on in a very brave manner.

While heavy on the legal aspects, he has clearly shown the danger that #MeToo represents. Remember, it could be you, your son or some else totally innocent, but the target of a woman who seeks something for her benefit.

Do what we must! Bring this horrible concept to a speedy end.

He and his family should never have had to go through the ordeal they've been forced to endure.

Although the Professor is a public figure and one might think this type of thing "goes with the territory", my reaction was far from that sentiment. The feelings I had toward the way this Man has been treated ranged from sympathy to soul wrenching anger and a real concern for where the behavior of the attorneys and media he outlines in the book leads us.

Finally, in spite of this book being a quick read, it is long on substance. While it is likely a necessary and important defense of Mr. Dershowitz's now obvious innocence, it's also a vital contribution to informing anyone willing to face reality about the methods being used by some to gain advantage at any cost, monetary or otherwise.

Tad Crawford
5.0 out of 5 stars A disturbing and persuasive read.
Reviewed in the United States on November 28, 2019
Format: Kindle EditionVerified Purchase
Dershowitz, a prominent attorney, asserts his innocence in the face of accusations of sexual abuse by a woman who worked for the infamous Jeffrey Epstein. Because the accusations are made as part of a lawsuit, Dershowitz is unable to sue for defamation. The accusations are picked up by the media and Dershowitz seeks in every way possible to clear his name, including calling the woman a liar so he can defend a defamation suit by her, asking District Attorneys and federal prosecutors to intervene (so both he and she would testify under oath and risk charges of perjury), and writing this book. Very few people could mount a defense as effective as his, but anyone is at risk of false accusations. Dershowitz is deferential to the #MeToo movement which seeks to rectify a longstanding and utterly unacceptable problem of sexual abuse in our society. Yet he also points to the need to have more than accusations determine guilt or innocence. A disturbing and persuasive read.
Read more
23 people found this helpful
Helpful
Comment Report abuse

Maura Kelley
5.0 out of 5 stars Guilt by Accusation
Reviewed in the United States on November 23, 2019
Format: HardcoverVerified Purchase
An amazing and detailed account of how the #MeToo movement can go so wrong as to almost destroy an honored professional's reputation. This should be read by all members of the legal and education professions.
Read more
20 people found this helpful
Helpful
Comment Report abuse
See all reviews from the United States

Catherine V
5.0 out of 5 stars Justice is for accuser and accused.
Reviewed in Australia on December 10, 2019
Format: HardcoverVerified Purchase
I have gone through an accusation . Prof Dershowitz asks that truth be sought, and not a successful prosecution. It is , by my experience possible that some people would make devastating allegations for money or revenge. If the police investigation does not seek truth , lives are devastated and future victims claims will be devalued. Peter v
Read more
Helpful
Sending feedback...
Thank you for your feedback.
Sorry, we failed to record your vote. Please try again
Report abuse

Danny from Nanaimo
1.0 out of 5 stars Boring
Reviewed in Canada on February 20, 2020
Format: HardcoverVerified Purchase
Looked forward to this book.
Repeats the same message over and over . . .
Good for cuing insomnia.
Read more
Helpful
Sending feedback...
Thank you for your feedback.
Sorry, we failed to record your vote. Please try again
Report abuse