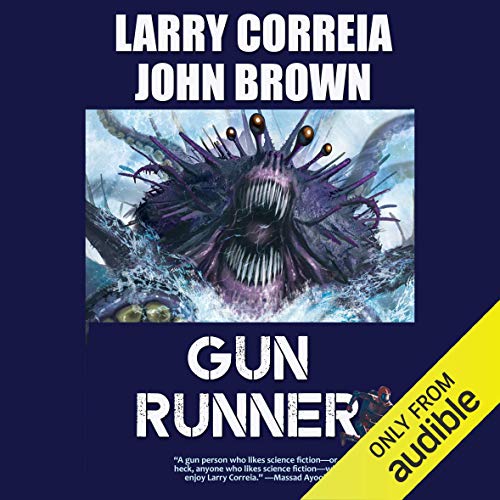 The heart of a warrior

Once, Jackson Rook was a war hero. Raised from boyhood to pilot an exosuit mech, he’d fought gallantly for the rebellion against the Collectivists. But that was a long time ago, on a world very far away.

Now, Jackson Rook is a criminal, a smuggler on board the Multipurpose Supply Vehicle Tar Heel. His latest mission: steal a top-of-the-line mech called the Citadel and deliver it to the far-flung planet Swindle, a world so hostile even the air will kill you. The client: a man known only as the Warlord.

Rook has been in the smuggling business long enough to know that it’s best to take the money and not ask questions. But Rook cannot stand by and watch as the Warlord runs roughshod over the citizens of Swindle, the way the Collectivists did on his homeworld. For all his mercenary ways, Rook is not a pirate. And deep within the smuggler, the heart of a warrior still beats.

Your audiobook is waiting!
Learn more about Membership
List Price: $29.95
You Save: $3.74 (12%)
By completing your purchase, you agree to Audible’s Conditions Of Use
Sold and delivered by Audible, an Amazon company

Amazon Customer
5.0 out of 5 stars Action-packed scifi tale of bad men fighting worse ones.
Reviewed in the United States on February 1, 2022
Scoundrels attempt to survive on an alien world, where if the native life isn't trying to kill them, participating in a coup against the local despot might.
Images in this review

Andrew M.
2.0 out of 5 stars Workmanlike, not up to the usual caliber. Not worth the $9.99 I paid to pre-order it. YA audience.
Reviewed in the United States on February 4, 2021
Verified Purchase
I'm a big Larry Correia fan and I pre-ordered this book based on his other work. I was disappointed. It's not terrible, but it is simply isn't up to snuff. The characters are two dimensional, the plot is just cheesy, like it was made for broadcast TV. It is well executed and the editing is first class, but it was boring to read. Yes, boring. I read very quickly and I barely made it through it. That seldom happens. There was no suspense, there were no real plot twists. It was as predictable as a Hollywood screenplay. Looks like it was targeted for a YA audience. Save your money, save your time, read something else.
Read more
19 people found this helpful
Helpful
Report abuse

Kindle Customer
5.0 out of 5 stars “Giant robots, bandits, and murderers.”
Reviewed in the United States on February 5, 2021
Verified Purchase
Do you like action? Action that starts in the first paragraph and just keeps going right to the end? How about stories where good(ish) people do their best to make sure that really bad people have the worst day ever (and then die)? How about books with fun and interesting characters that are complex enough to care about without getting in the way of the story? Do you want to just read something cool? Then buy this book.
Read more
15 people found this helpful
Helpful
Report abuse

Shawn Carey
5.0 out of 5 stars Solid, Entertaining Novel!
Reviewed in the United States on February 25, 2021
Verified Purchase
Gun Runner was a fun book to read. The book flowed nicely. I could not determine which author, Larry Correia or John Brown wrote what parts of the story. I liked the idea of the god point in the gate travel, what different people experienced at the halfway point. There are monsters in the novel.. They are not supernatural and just do what animals do to survive on their planet. The actual monster in this book is a human who uses other people to get the results he wants. Correia and Brown have written a solid novel. The crew of the Tar Heel is full of interesting and likable characters for the most part. I am not to sure about Shade.
Read more
11 people found this helpful
Helpful
Report abuse

Truman Jensen
5.0 out of 5 stars Best collaboration of Larry's to date
Reviewed in the United States on February 8, 2021
Verified Purchase
Been a fan of both authors since there very first book came out. I've enjoyed all their books and this one as well.

This is more of a space Opera so it's a little different from their previous books and quite frankly the ideas sound like they came from the mind of a 10 year old but the writing is solid, the action is great.

As the title suggests, the story is around a group of arms smugglers. They steal and deliver weapons (mech warriors) to planets that need them due to being oppressed etc). I imagine someone taking the best parts of the Han Solo, Firefly and mech and creating an awesome story.

I could easily see this becoming the first movie deal for either author. (It has Michael bays name written all over it to screw up).

Highly recommend any of their books including this one.

A. Nickel
5.0 out of 5 stars Fantastic, action-packed story in the Sargent Jack saga.
Reviewed in the United States on February 6, 2021
Verified Purchase
Once again I started a Larry Correia book and couldn't put it down until I finished it.
Larry & John Brown have written a spellbinder. The interactions of the people make for a multitude of subplots and back stories many of which lead to future installments, like Jane should easily provide.
Of course, Jackson Rook is a really good hero. As many of the Sci-Fi writers have found out their heroes need to have frailties, problems, misadventures and such to give them some semblance of believability and to create empathy for them, and Sargent Jack is no exception. I can only hope that Larry & John will put together another volume, perhaps where Jack and Jane save the Sisters...
Read more
7 people found this helpful
Helpful
Report abuse

Daniel J. Mello
5.0 out of 5 stars Excellent Sci Fi Book
Reviewed in the United States on March 8, 2021
Verified Purchase
An adventure through several points of view about the struggle on a planet that is the source of a rare material needed for Stargates to make space travel possible. The hero is a mech pilot who survives a war against a repressive uprising and is infected with a computer virus that took over his brain and turned him into an observer. He is rescued by a friend who is a weapons smuggler and he joins the crew as a mech pilot. They have a mission to Swindle, the world with the only source of high grade organic material required for Stargates. The problem is the original colonists are being suppressed and hunted by the overlord of Swindle. What side with the pirates come down on, who will they work for, and can they stand the tug to their conscious? Meanwhile, a sleeping virus is about to be reactivated, what will happen.

A great novel by one of my favorite authors.
Read more
2 people found this helpful
Helpful
Report abuse

Kindle Customer
5.0 out of 5 stars This is what's cool:
Reviewed in the United States on February 3, 2021
Verified Purchase
"Giant robots, bandits, and murderers." Please do not read this book if you hate awesome galactic space romp adventures with great characters that you will be sucked into and forced to read all the way through. Hope there is more coming soon!
Read more
7 people found this helpful
Helpful
Report abuse

Kindle Customer
4.0 out of 5 stars It's all cool!
Reviewed in the United States on February 7, 2021
Verified Purchase
Two authors, one cracking good yarn! My only complaint is that the e-book version could have used ONE more editing pass. Just minor little spelling errors, redundant wording, missing words, fiddly bits that didn't affect the story so much as trigger my inner grammar libertarian.

Otherwise, this was a REALLY good story! Likeable characters, great action & pacing, and just so much cool stuff. "What's cool?" Larry & John asked one another as they wrote this. It's ALL cool!
Read more
5 people found this helpful
Helpful
Report abuse
See all reviews

Renser
5.0 out of 5 stars Collectivists beware.
Reviewed in Germany on February 5, 2021
Verified Purchase
Couldn't stop reading. I want more, and am now waiting for sequels and prequels with samoan warriors, navy officers leading their crews, cybernetic little hacker-girls and possibly sergeant jacky getting back home and freeing people from reeducation camps. Not necessarily in the same book.
Read more
One person found this helpful
Report abuse

Mark
3.0 out of 5 stars Not as good as I thought it would be.
Reviewed in Australia on February 24, 2021
Verified Purchase
Bought the book as I am a fan of Larry. Disappointed as it was not up to his usual standard. I never really empathised with the main character. All the recipe was there for a great story but it just didn't come together for me. If there is a book two I will wait for it to come out in my local library.
Read more
Report abuse

Armin Lenz
4.0 out of 5 stars Starts off a bit slow but goes strongly after that
Reviewed in Germany on February 5, 2021
Verified Purchase
A smuggler crew ends up with an ethical grenade in their lap that requires sacrifice and guts to disarm. People who like action, mechs, smugglers and devious dastardly villains will enjoy this ride and there hopefully will be a sequel to pick up some of the hints at a greater conspiracy behind it all.
Read more
Report abuse
See all reviews