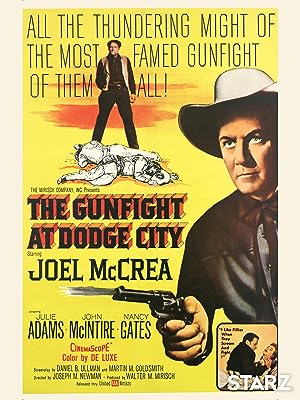 The Gunfight at Dodge City

(122)
6.21 h 21 min19597+
The legendary Bat Masterson is forced back into law enforcement and into a final battle when a town is overtaken by a gang that is led by a crazed, half-wit killer.

Lee In MotionReviewed in the United States on December 31, 2016
5.0 out of 5 stars
~ Joel McCrea, Julie Adams star in a Western that has "Dodge City" written all over it! ~
Verified purchase
This bluray edition, done by Kino Lorber, the same company that did "Fort Massacre" with Joel is really good. The HD looks fabulous and if you own a 4K TV with a 4K player, you are in for a treat.
The picture and sound are just wonderful, better than anything that has been done before in previous releases.

Joel stars as the brother to Ed Masterson. When his brother gets shot in a shootout in Dodge City by a rowdy gang of thugs, he runs in competition for the spot of Sheriff. The current Sheriff, a buffoon and pretty bad Sheriff at that, loses. He then seeks out revenge on Bat and anyone that stands in his way.

Other notable stars of the era in this one are Julie Adams (The Creature From the Black Lagoon, Bend of the River), Sam Jaffe (The Asphalt Jungle), Richard Anderson (The 6 Million Dollar Man, Tora! Tora! Tora!).

Amazon CustomerReviewed in the United States on November 15, 2018
5.0 out of 5 stars
Decent story good entertainment.
Verified purchase
Nothing to dislike about the movie . If you like Joel MacCrea he is always been the best cowboy in my book .
5 people found this helpful

D. C.Reviewed in the United States on January 8, 2017
4.0 out of 5 stars
Good Western
Verified purchase
I saw this movie when I was a kid. Joel McCrea was a big deal back then. When this came out on blu ray, I purchased it and it is still a good solid western. I think the characters sell the movie. Well worth watching.
7 people found this helpful

Alan StillingsReviewed in the United States on September 15, 2020
3.0 out of 5 stars
Dvd Review
Verified purchase
I like this older Western, great movie. I didn't like the condition the case came in, the bottom of the spine had a piece broken off. Other than that, I enjoyed the movie.

Peter RaneyReviewed in the United States on February 27, 2020
4.0 out of 5 stars
Okay, not the greatest.
Verified purchase
Not one of the better movies.

Anthony DietzReviewed in the United States on April 12, 2021
5.0 out of 5 stars
good movie
Verified purchase
i like the movie very good thank you

BobReviewed in the United States on November 4, 2017
5.0 out of 5 stars
Five Stars
Verified purchase
Good to go

Terence AllenReviewed in the United States on October 13, 2008
3.0 out of 5 stars
McCrea Western Not One of His Best
Verified purchase
"The Gunfight at Dodge City" was one of many Western made by the great Joel McCrea, one of those actors who seemed born to play Western characters. He made several outstanding, many that were pretty good, and some that were at best, fair to middling.

This film falls into the fair to middling category. This fictionalized account of how gambler/gunfighter Bat Masterson became the marshal in Dodge City is uninvolving and takes too many shortcuts with logic and believability. Masterson becomes marshal when his brother is killed, but when the killer is discovered and is shot down by Masterson, the revelation of the killer's identity is regarded as an afterthought. Also, Masterson breaks the law by breaking the mental challenged brother of his friend Ben Thompson out of jail with very little regard for how that will affect his standing as a lawman. This device was used in other films like "The Law and Jake Wade," but to much better effect than in this film.

The movie is not horrible, but it's just not very good.
5 people found this helpful
See all reviews
Back to top
Get to Know Us
Make Money with Us
Amazon Payment Products
Let Us Help You
EnglishChoose a language for shopping. United StatesChoose a country/region for shopping.
© 1996-2021, Amazon.com, Inc. or its affiliates