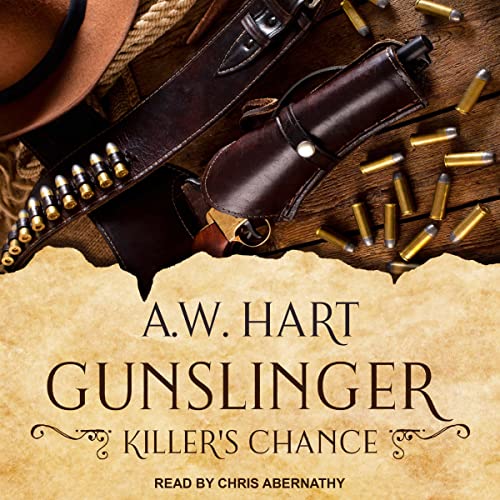 From the author of the fast-paced Avenging Angels series comes a new kind of Western hero....

Fourteen-year-old Connor Mack dreams of a life adventure while stuck plowing, doing all the chores, and being treated as a slave on the half barren family spread in East Texas. He plans to one day flee the beatings delivered by his hulking older brothers and lazy pa. But he knows if he does, he must take his twin sister Abby - who is not always right in the head - with him.

He gets his chance when River Hicks, a man wanted for the murder of a policeman in Fort Worth, rides in with a pack of bounty hunters on his trail. When the gun smoke clears, Connor has killed men for the first time, but he also knows this is his and Abby's time to escape their life of abuse.

Knowing the law will soon be on their heels, they follow Hicks - an outlaw driven by his own demons, and by deep secrets that somehow involve the Mack twins.

Conner has a lot of learning and growing up to do...and he has to stay alive to do it.

Special invitation from Audible!
Learn more about Membership
List Price: $20.99
You Save: $2.62 (12%)
By completing your purchase, you agree to Audible’s Conditions Of Use
Sold and delivered by Audible, an Amazon company

Amazon Customer
4.0 out of 5 stars From hard work and beatings to running for their lives….
Reviewed in the United States on October 16, 2019
AW Hart - Gunslinger - Killer’s Chance - Reviewed 10/15/19After taking another beating from his spiteful pa and waiting for his vengeful brother to bring the bullwhip for more punishment. Fourteen-year-old Connor Mack’s twin sister, Abby tries to stop the whipping, that she knows could kill him… as they are struggling a stranger approaches the house. While words are exchanged his brothers spot more riders coming. The stranger tells everyone to seek safety and the bullets start flying. Conner acts instinctively and ends up killing a few of the bounty hunters after the stranger. With no choice, as their pa and brothers are sure to blame Conner for the dead bodies, they follow the outlaw, River Hicks. The outlaw has more than a few of his own devils and somehow they connect to Conner and Abby. Connor knows that he has to take care of Abby as she is troubled with her mind not always being on the right path. As the twins travel, Connor and Abby experience freedom for the first time as they were both treated like slaves doing all the work around the farm. Connor realizes that he has lots to learn and he will have to grow up fast to be able to keep Abby safe.What did I like? Sometimes the most bizarre thing will give a person the break and the push to do what they were wanting to do but didn’t have the where with all to do it. For Conner and Abby, Hicks was that push and they knew there was no turning back because the deck was stacked against them. I have seen in my life several times situations similar to this, so this book really struck a chord with me.What will you like? A well written and edited storyline that grows with each page as you advance into the problems the twins get themselves into, but mostly Conner is doing the getting! The secrets start from the first day and the author keeps you guessing all the time. The adventures just keep getting more involved, costing Conner with each one. Connor’s life lessons come at him hard and fast, but he just keeps plugging at them. His fears for Abby keep him on his toes. I like the way the author gives the details, and the descriptions so that I felt like I was right there next to the kids. There were some breath-holding going on with several of the more involved ones, but they were awesome. The author’s book two will be releasing later this month, Killer’s Fuse. Join me in another book that has opened up the wild west again.
Images in this review

JOHN CHAVEZ
4.0 out of 5 stars Gunslinger: Kiler's Chance
Reviewed in the United States on December 25, 2019
Verified Purchase
I loved this story. There are three main characters 14 year old twins Connor Mack and his sister Abby and then there is River Hicks. Connor and Abby have three older brothers. but there pa always finds fault with Connor and beats on him almost daily. Connor could probably beat up his pa then he takes his beatings to protect his sister Abby. One day River Hicks happens along and Connor helps Hicks kill off some men who are after Hicks. You have to read the book to learn why the pa hates the twins so badly. Hicks takes Connor and Abby under his care and heads to a small town in Texas. Hicks gives Connor shooting lessons and Connor takes to it like a natural. There is some great action and you have to read to learn what Hicks main goal is, a great book.
Read more
3 people found this helpful
Helpful
Report abuse

Kindle Customer
5.0 out of 5 stars Conner, Abby and Hicks certainly know how to stir up trouble, as they work their way throughout the West! Conner, who doesn't put much conference in Hicks, but Abby definitely believes e is the answer to end all their troubles. Certainly a fast moving rendition of unending adventures and you need for excitement never wanes in this compassionately motivated story of unending adventures?
Reviewed in the United States on July 14, 2021
Verified Purchase
Definitely another five star masterpiece by Mr . Hart, as he leads his readers along a fast moving series of unending adventures in the worthy western folklore masterpiece! Hicks apparently is a man of many names and proves his worthiness many times over. Abby proves herself to bean adventurous young lady, who has no qualms in mixing things up at the drop of a hat! They all prove themselves to be worthy of your undivided attention from beginning to end!
Mr. Hart's never ending storylines successfully maintains your undivided attention from beginning to end, as Hicks definitely proves himself behind the scene more than once. Too, the perfectly selected characters were unsurpassed in their commanding assignments throughout this compelling old American western folklore adventures of one exciting gunfight after the other!
Definitely recommend this compassionately motivated story to everyone, but you old western folklore enthusiasts will definitely enjoy following these characters, as they continuously bring justice to those responsible for wrongful misdeeds! Even you non-western readers will find yourselves completely entertained from beginning to end!!!😃

Kindle Customer
5.0 out of 5 stars Great story
Reviewed in the United States on July 20, 2021
Verified Purchase
Just when you are fixing to give up on cowboy novels a great and well written story turns up. You want to read it in one setting but there is no way but there are plenty of places than let's you stop for a period of time . The plot unfolds smoothly plenty of action it tells the story of a brother and sister their trials and hold they handled them. When you finish this story I guarantee you will look for the next stories of their journey in life. Read it.
Read more
Helpful
Report abuse

Dixie
3.0 out of 5 stars Wrong protagonist!
Reviewed in the United States on July 19, 2021
Verified Purchase
Connor is a wimp and a wuss, thinking of nothing but keeping his sister safe while she's more capable, intuitive and intelligent. Just finished #2 of the Ranger series, preordered #3, and looked forward to reading this 8 book series. If the next one is ANYTHING like this, I'll not waste my time!
Read more
One person found this helpful
Helpful
Report abuse

Kindle Customer
1.0 out of 5 stars Review
Reviewed in the United States on November 14, 2019
Verified Purchase
I thought this book would never end. The head guy ,Connor, was a whiney guy and the sister ,Abby, was a little off. The story line was silly and the characters were there then they were gone. The last 2 pages finely had some action.
Read more
3 people found this helpful
Helpful
Report abuse

Kindle Customer
4.0 out of 5 stars Quite possibly the single most stupid MC ever.
Reviewed in the United States on November 14, 2021
Verified Purchase
Good story. Interesting characters. . Kind of farfetched in many cases and the MC vascilates between dumb and dumber. AWH is a great storyteller but Connor is beyond ridiculous.
Read more
Helpful
Report abuse

Grampa Tom!
5.0 out of 5 stars With a real skill with words!A.W.---!!!
Reviewed in the United States on November 8, 2019
Verified Purchase
And again-just plain Good Story-Well written -
And-kept me hanging tight to my saddlehorn-And you Can learn to shoot- REAL FAST too! - With pin-point accuracy "--JIM" Connor did-the bad guys just Fell' They shot at him- MISSED!He shot at them' DIDN'T !
Read more
One person found this helpful
Helpful
Report abuse

Kindle Customer
5.0 out of 5 stars Gunslinger: Killer's Chance
Reviewed in the United States on May 29, 2021
Verified Purchase
This was an amazing story packed with tons of action and suspense. The only thing lacking was a great love story for the main characters. Hopefully the next book in this storyline series will have it.
Read more
Helpful
Report abuse
See all reviews

Kindle Customer
5.0 out of 5 stars Readable
Reviewed in the United Kingdom on December 8, 2019
Verified Purchase
Not to bad a book with quite a reasonable story to it and quite well written by a pretty good author
Read more
One person found this helpful
Report abuse