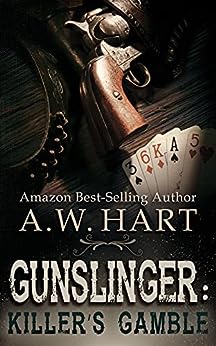 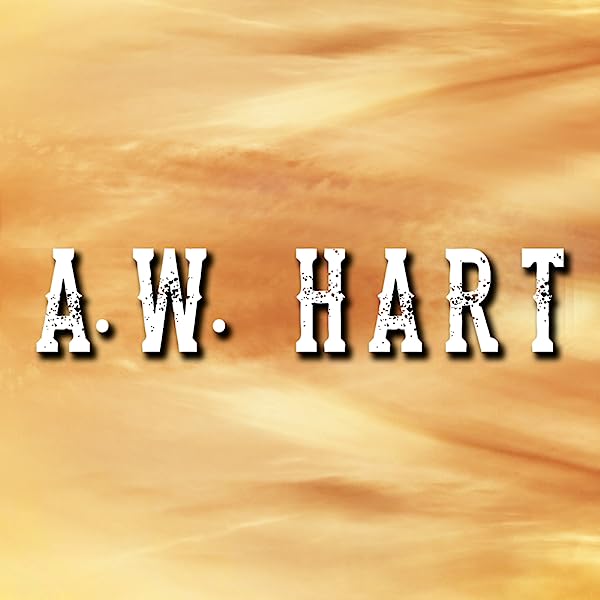 by A.W. Hart (Author) Format: Kindle Edition
Book 8 of 9: Gunslinger
See all formats and editions
Sorry, there was a problem loading this page. Try again.
FROM THE AUTHOR OF THE BEST-SELLING AVENGING ANGELS SERIES COMES BOOK EIGHT IN THE HEART-POUNDING WESTERN ADVENTURE!

Despite being relentlessly pursued by Pinkerton detectives and an assortment of hired killers, Connor Mack and his twin sister, Abby, are determined to see things through with their mentor, gunslinger River Hicks.

The quest to clear Hicks of a false murder charge requires them to find and confront the rich, powerful foe who seems bent on destroying them. Their journey takes an unexpected turn after they’re involved in a bloody confrontation between a bounty hunter and a group of vicious outlaws. Ultimately, this leads them to the town of Land’s End where a strange set of circumstances embroil them in a heavyweight boxing match, a high-stakes poker tournament, and much more. Unbeknownst to Connor and Abby, their three malevolent brothers have also been recruited to work against them. All roads lead to Land’s End for a showdown that will take place not only in the boxing ring and the gaming tables, but in the dusty street as well.

Connor, Abby, and Hicks have no choice but to play the hand they’re dealt in this ongoing killer’s gamble…and it’s certain that treachery, betrayal, and death are in the cards.

The Avenging Angels and Gunslinger series were created by Wolfpack series editor Paul Bishop along with top western wordslingers Peter Brandvold and Mel Odom. A.W. Hart is a pseudonym representing a posse of today’s best western writers, who are notated on the title page of each series entry. Mean Pete Brandvold wrote the first book in the Avenging Angeles series, Vengeance Trail, while Mel Odom took the reins of the first Gunslinger volume, Killer’s Chance. Other Avenging Angels and Gunslinger books have been written by Richard Prosch, Wayne D. Dundee, Eric Beetner, Michael Black, Mike Baron, David Foster, Chuck Dixon, Charles Gramlich, Tim Tresslar, and others. Every volume in both series are chock full of bullet-blazing Western and strong characters always fighting against the odds.…

Kindle Customer
5.0 out of 5 stars Just when I didn't think Buck's and his two cohorts, Conner and Abby, couldn't get into more trouble than they continuously found themselves in, it only gets worse! Mr. Hart pulls no punches in this compelling rendition of unending gunfighting and endless survival escapades!
Reviewed in the United States on August 30, 2021
Verified Purchase
Definitely another five star extravaganza that has no slow downs throughout the entire series of unending gunfighting excursions that successfully maintains anyone's undivided attention from beginning to end! This trip doesn't have to go looking for trouble, as it is around every corner they turn! Too, the outstanding storylines successfully maintains your undivided attention immediately, and only intensifies with each new adventure, as this trio continues to enhance your undivided attention from beginning to end with their commanding endeavors! As always, Mr. Hart's superbly descriptive selections continues to add humor, as well as exciting heartwarming episodes throughout this compelling western folklore masterpiece! Definitely no slow-downs and no punches pulled as there is enough dry humor to maintain anyone's undivided attention throughout the entire series of ongoing excursions! Justice must be served!
Most certainly recommend this outstanding western series of unsurpassed excitement and compassionately motivated stories of ongoing gunfighting episodes! There is humor throughout this compelling story of how I perceived our old American West was finally conquered! To not follow this trio of unlikely heroes would be a terrible loss for all you western folklore fanatics, as their continuing attempts to bring justice to those responsible for their actions will pacify your inner most desires! Even you non-western fanatics will find yourselves unable to put this compelling western folklore masterpiece aside until the final paragraph has been read!!!😃
Read more
Helpful
Report abuse

Kindle Customer
5.0 out of 5 stars Good read
Reviewed in the United States on September 10, 2021
Verified Purchase
At last some answers to the questions raise in the preceding books. I look forward to the next work and hope it is slam full as I expect it well be.
Read more
Helpful
Report abuse

Clyde Lang
4.0 out of 5 stars Good story
Reviewed in the United States on August 18, 2021
Verified Purchase
This story was entertaining, however the number of characters was a bit much to keep track of. Otherwise, it was a riveting tale.
Read more
Helpful
Report abuse

The trio, River Hicks, Conner, and Abby Mack had made camp for the night when they heard a shout from the darkness, “Ho camp, can I come in?” River slipped into the shadows and Conner told the speaker to come on in if he was friendly. As the two horses approached, the young man sitting atop one of them stated that he was a bounty hunter, by the name of Stokes, and this other fellow here was his captive, Nate Briscol, leader of the Briscol-Cole Gang.

The trio kept anyone approaching them under suspicion, as they were headed to Oregon to clear a false murder charge on River. On top of that, they were still being chased by the Pinkerton men. Shortly later shots rang out, the bounty hunter said that it might be Nate’s gang. After the smoke settled down, Stokes told them that all of them had bounties on them and he would be happy to share, but of course, not on Nate as he had done that all by himself.

On the way into town, they stopped to help a trio of men that told them they were training for the upcoming boxing match, and their friend had tripped and fallen. He might have broken his leg, plus he surely was dehydrated from the heat. Conner was fascinated by the things that he was hearing from the big black boxer and decided that he would like to learn more.

Arriving in Land’s End, they find the town in an uproar, seems like Stokes was right. There certainly was going to be a big poker game, in addition to a boxing match. Hicks commented that winning that would surely set them up for the rest of their trip! Aside from that Conner was not too happy with the way that Abby was acting towards the slick Stokes but figured that he would not be able to stop her. Hicks advised him that it would be foolish to even try. On top of all the other problems they had, the darn Sheriff informed them that it would be a couple of days before the bounty money came in, and they would just have to wait for it.

Join River, Conner, and Abby as they find themselves amid a planned robbery, Pinkertons on the way, and Abby’s fascination with a lady poker player…

What did I like? Surely missed this group as I have read the whole series from the beginning and love the relationship between the three of them. It’s been enjoyable watching the twins as they struggle with their learning curve of life, all the while enjoying the cruelty-free relationship with River. Although he has never told them why he is helping them, they believed they have finally found a friend and father image to fill the void in their young lives.

What will you like? Heart-pounding action, tons of gunplay, mysterious robbery plans, traitors, disreputable lawmen, lecherous gamblers, new friends, the twins learning new activities, and a high-stakes poker game. The stakes are high all around for the trio, robbers, and players, but where will it all end? Lots of men die but who will it be? The trio are in a battle for their lives and what will happen to Abby? These are just a few of the questions that will be answered in the new upcoming eighth book of the Gunslinger series by AW Hart. “Killer’s Gamble” will be available on June 23, 2021.

Virginia dude
5.0 out of 5 stars The Twins and River Hicks keep entertaining us
Reviewed in the United States on June 25, 2021
The Twins have developed some in each book and the adventure never stops. High stakes poker, boxing matches, gun fights, attempted robbery, you name this western has it. Great read
Read more
One person found this helpful
Helpful
Report abuse

HARALD G. HALL
5.0 out of 5 stars read this book.
Reviewed in the United States on June 27, 2021
lots of action and it's well written and worth reading. you wont be sorry you read this book.
Read more
One person found this helpful
Helpful
Report abuse
See all reviews