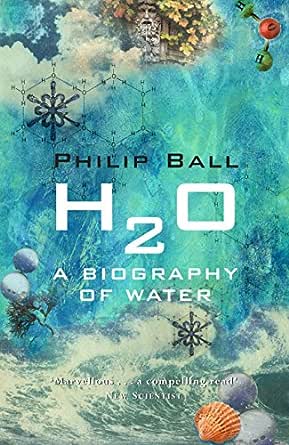 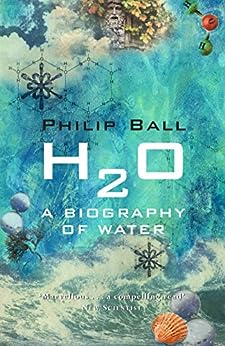 Philip Ball is Senior Editor for Physical Sciences with the international scientific journal, Nature. --This text refers to an alternate kindle_edition edition.

4.2 out of 5 stars
4.2 out of 5
65 global ratings
How are ratings calculated?
To calculate the overall star rating and percentage breakdown by star, we don’t use a simple average. Instead, our system considers things like how recent a review is and if the reviewer bought the item on Amazon. It also analyzes reviews to verify trustworthiness.
Top reviews

Ulrike Griebel
5.0 out of 5 stars Fantastic book!
Reviewed in the United States on November 13, 2017
Verified Purchase
This book is well written, with a very broad scope and accessible not only to a scientific audience but to any interested reader!
Read more
Helpful
Report abuse

Milton N. Burgess
5.0 out of 5 stars Good Water Book
Reviewed in the United States on September 20, 2012
Verified Purchase
This is a book well worth reading. Gives insight into the nature of water in an entertaining way. It would be better if there was a Kindle edition.
Read more
One person found this helpful
Helpful
Report abuse

Bec
5.0 out of 5 stars Water
Reviewed in the United States on April 5, 2014
Verified Purchase
Another of Ball's great works. He does a great job intertwining history, religion, the sciences, and future. Love the text!
Read more
Helpful
Report abuse

Mr P R Morgan
3.0 out of 5 stars The water of life, or the life of water?
Reviewed in the United States on May 24, 2007
For me, this volume has three distinct parts which are quite different, like the proverbial curate's egg - good in parts. The overall recommendation would be "read it", and in doing so, you will learn something new about water, the most basic of commodities, and yet at the same time the most precious.

First there are pages on the physical properties of the substance. This also encompasses the chemical properties, and the wonderful story of the discovery of oxygen, with the colourful figures of Cavendish, Priestley and finally Lavoisier. It is one of the quirks of the history of science that what Ball describes as a lonely chemist (Jean Marat) was responsible for sending a prized savant to a death embraced by Madame La Guillotine "because the Republic has no use for savants".

Amongst this part there are facts and figures that remind readers of the wonders of nature, and how "lucky" we are that there is such an abundance of both water, and variety of life forms on our green planet. Three quarters of the world's fresh water is held as ice, yet this comprises only 2% of the Earth's surface water, because of the enormity of the oceans. It is also astonishing that ice has 20 to 30 times less frictional resistance than other solids. Ball brings a sense of wonder and excitement at the natural history all around us, describing how fish and frogs survive at extremely low temperatures (some frogs even freezing), and how plants adapt to cold. The production of abcisic acid in autumn can mean that some plants can survive down to -30º Celsius, yet would have been killed-off by only 0º Celsius months earlier.

The middle part of the book for me was the most challenging, describing in detail how water is joined together by hydrogen bonds. There WERE better sections to this portion, but it was at times hard going, and to have a section that can be described as DRY in a book about water is ironic. That said, it was a revelation that ice can exist in many different forms, including where the temperature is at 100 º Celsius (albeit at very great pressure). There are also philosophical questions about water: if water is the medium in which life began, the fact that water has a destructive impact on amino acids is a problem.

The final part is the most interesting, discussing the nature of what constitutes `good' and `bad' science, whilst discussing ultimately erroneous (as at the current tine) theories in the broad area of water. Ball is at pain not to use the judgemental terms `good' and `bad', but that is what he is describing. His refusal to use these terms is thus rather artificial. He makes the point that science derives much of its formidable strength from the ability to make and live with mistakes. Therefore, it is necessary to encourage mistakes, if they lead in the direction of greater knowledge. He quotes John Madox's view that in science, the concept of heresy is meaningless. Heresy is an opinion contrary to generally accepted beliefs. Therefore, most scientific revolutions start with heresy. However if there are extreme claims, these require extreme evidence. This was the stance taken by `Nature' (of which John Madox was the editor) when faced by one of these possible scientific explanations (cold nuclear fusion - the others being anomalous water, and the idea that `water has memory')

The subject of `water' seems to be a small subject, yet Ball has written a wide-ranging work. It is not a book to go for to get answers, more to go to when you want questions. Along the way there are good side-discussions (including homeopathy, water conservation, global warming and possible future water wars). I am left with a better understanding of what science is (a battle between conservatism, or scepticism of new ideas, and innovation). Let us conclude with the sentiments of Ball: Only a fool would deny that water would hold [as yet] unguessed secrets and wonders in its molecular structure. But it is not so magical so as to escape the laws of physics.

Dr. Norman White
5.0 out of 5 stars The miracle of water
Reviewed in the United Kingdom on December 16, 2020
Verified Purchase
Water is literally vital to life on earth. This book is a comprehensive survey of the (simplified) chemistry and physics of water and its extraordinary properties. It surprised me that it is not an unlimited resource and that fresh water is a limited quantity. I found it easy to read, well written and I will read it again.
Read more
One person found this helpful
Report abuse

Dr. Pip
5.0 out of 5 stars Adam's ale: what everyone should know
Reviewed in the United Kingdom on July 25, 2009
Verified Purchase
I found a reference to this book in one Oxford's ' very short introduction' series and bought it to fill in what I felt was a lacuna in my knowledge.
I was not disappointed. In its direct style, there is information in this book to satisfy the interest of any body and it can be accessed even by simply dipping in.
From those who prefer the history of science, to those whoe want to understand the scource our world's weather systems an introduction is here.
And I even hd a brief insight into the "lattice theory of water" that I believe homeopaths invoke to explain the efficacy of their preparations which last saw an active molecule many dilutions ago.
Buy it, read it and keep it on your bookshelf
Read more
6 people found this helpful
Report abuse

Mr Robert Horrill
2.0 out of 5 stars Too much text in one book!
Reviewed in the United Kingdom on February 22, 2020
Verified Purchase
Liked the subject matter, but when the book turned up it was a classic case of a very large hardback squeezed into a paperback. Type to small, too many words per page and generally crammed in. Therefore, found it too hard to read. also, subject matter was vey dry and a bit more technical/scientific than I had been led to believe.
Read more
Report abuse

Random Drifter
5.0 out of 5 stars Fascinating
Reviewed in the United Kingdom on July 20, 2013
Verified Purchase
A very interesting and in-depth look into the many different aspects of Water. The book is filled with fascinating insights into the special properties of water. The book covers everything from a fairly detailed look at the physics behind the formation of Hydrogen and Oxygen in the early cosmos to the biological aspects of Water and life with plenty of chemistry, history and geography thrown in for good measure.
Read more
One person found this helpful
Report abuse

Humulus lupulus
5.0 out of 5 stars Who would have thought water is so interesting?
Reviewed in the United Kingdom on December 9, 2017
Verified Purchase
Can be a bit soporific, but an interesting dissertation. Philip is an excellent writer able to bring STEM to the lay reader. Can unreservedly recommend any of his works.
Read more
Report abuse
See all reviews