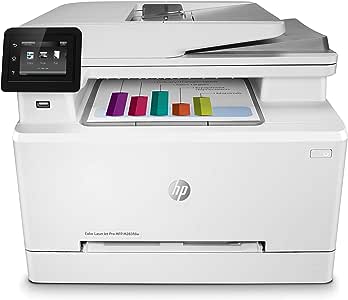 by HP
4.3 out of 5 stars 63 ratings
| 74 answered questions
Amazon's Choice recommends highly rated and well-priced products.
Amazon's Choice for "hp laserjet printer"
Available at a lower price from other sellers that may not offer free Prime shipping.

Print in color and from mobile devices, and get wired and wireless networking with this versatile all-in-one.

Simplify jobs with the color touchscreen, auto document feeder and two-sided printing, and save energy with Auto-On/Auto-Off technology.

4.3 out of 5 stars
4.3 out of 5
63 customer ratings
How does Amazon calculate star ratings?
Amazon calculates a product’s star ratings based on a machine learned model instead of a raw data average. The model takes into account factors including the age of a rating, whether the ratings are from verified purchasers, and factors that establish reviewer trustworthiness.
Top Reviews

James Morris
TOP 1000 REVIEWER
3.0 out of 5 stars Not The Easiest Set-Up, But A Good Printer Nonetheless. Expensive Toner.
Reviewed in the United States on March 26, 2020
Vine Customer Review of Free Product( What's this? )
I ordered the HP Color Laserjet Pro M283fdw Wireless All-in-One Laser Printer for my home, because I have always wanted a laser printer.

In doing some online research after I ordered it, I found several negative reviews on HP Laser Printers, mostly concerning set-up problems and the affordability of toner. While I waited for the machine to be delivered, I bit my nails a bit wondering if I'd made a mistake. It turns out I did, and I didn't. I was a bit worried about the size of the machine, since I wanted to place it on my desk near my desktop computer, and it looked pretty big on the product page. But it turned out to be only slightly larger than my old Inkjet printer, so it fit fine.

While the software was setting up the printer, the process took a great deal longer than I expected it to, and at more than one point the set-up on my computer screen froze. This was confusing and a little nerve wracking, because at one point the set-up said, "This will take a while" and then counted out the minutes before that step would be complete. But, a bit later, one process of the set-up gave no such indication that it would "take a while", nor did it count off the minutes remaining, and the process at that point "froze" for an extremely long time. I hate when set-up programs do that.

Finally, after an unacceptable total time almost two hours, the software said, "You have successfully set-up your printer". The software said that the setup program would make the new M283fdw the Default Printer on my computer. That didn't happen and I had to manually (through my computer's settings / control panel) make the new machine the default.

However, after all the set-up glitches, I have to say that, performance-wise, this is a great printer. With some reservations.

When printing a number of pages, the printer is very quiet and produces the pages very rapidly, more rapidly than I've ever seen in any other printer, including the professional printers I've used in the office. That is, once it starts printing. Annoyingly, when you hit the print button on your computer (in this example a Microsoft Word document) it flashes "Connecting To Printer" for 3-4 seconds before the print settings screen comes up. Then, after you've adjusted the print settings (if necessary) it flashes "Connecting To Printer" again for another 3-4 seconds. Then it starts to print.

There is also a document feeder on top of the scanner screen. With this you can load a single document to be scanned without opening the scanner.

As mentioned earlier, one drawback is the extremely difficult set-up. I am a fairly computer literate person. While not an expert, my experience with computers and my grasp of program logic makes me a better-then-average user. And if I had difficulty setting up this printer, I'm sure than there are many people who will not be able to set it up at all without assistance. But the second drawback, and the greatest reason for my Three Star rating, is the maintenance cost.

So, this machine is pretty good, but difficult to set up and expensive to maintain. Therefore, I do recommend it, but with reservations. I rate it Five Stars for performance, minus Half a Star for ease of set-up and minus One and a Half Stars for maintenance price. My total rating is Three Stars.

chip Wandling
1.0 out of 5 stars Don't bother. HP software can't keep the printer working
Reviewed in the United States on April 7, 2020
Verified Purchase
I can get about one task an hour. Then I need a series of reboots, hard restarts, reprints. Print tasks continuously hang. I used to work in IT 15 years ago and hated HP printers, but fooled myself thinking times had changed.

Susan
2.0 out of 5 stars Prints crooked
Reviewed in the United States on June 4, 2020
Verified Purchase
I purchase this machine, knowing that it would work well. I was disappointed right off the bat, because when I fed documents through the document feeder to copy, the copies printed crooked. The bottom part of the copy was leaning toward the left edge of the paper. Every time. So I sent that machine back and ordered a replacement (same machine), knowing that it would take care of the problem. The second machine certainly would not produce the same results. Right? Wrong again. It prints exactly the same as the first machine, when documents are fed through the document feeder. When the original is placed on the glass and copied, it comes out perfect. So I'm going to send this one back and find a different machine that will produce straight copies when using the document feeder.
Read more
8 people found this helpful
Helpful
Comment Report abuse

Tanya R
5.0 out of 5 stars Easy to set up - so far, so good
Reviewed in the United States on April 10, 2020
Verified Purchase
I was nervous about seeing this wireless printing up by myself at home without IT help. It was super easy to set up on my laptop as well as my smart phone. I’ve never printed from my phone before but it certainly makes life easier.
Read more
9 people found this helpful
Helpful
Comment Report abuse

Michael Westfahl
5.0 out of 5 stars HP Quality All The Way
Reviewed in the United States on April 21, 2020
Verified Purchase
Received in factory packaging. Easily unpacked. No boo-boos.
Set up was minimal from start to finish. No network connection problems; smooth integration into our existing bluetooth network.
Print quality: Standard B/W printing is pristine. Color brochure printing is professional grade. Photo printing is more than satisfactory with careful application using the correct, HP recommended papers.
All total, we are SO very satisfied and glad to have made the switch from inkjet to laser!!!
Read more
9 people found this helpful
Helpful
Comment Report abuse

Pat Wagner
4.0 out of 5 stars I replaced my old laser and I lost a bit of print quality.
Reviewed in the United States on June 12, 2020
Verified Purchase
I thought, why not just buy a new wireless printer for the same costs as replacing all four cartridges for my old HP laser printer which is a big industrial thing. Setting it up was easier than getting it out of the box. Software downloading without a hitch, it took a few minutes but an abnormally long time for new equipment. I hit skip for the Fax feature and didn't get a "Congrats your printer is set up!" message or any other messages, so not sure if all the features will work (who faxes anymore, or has a landline? It's not loud. and doesn't take up more desk space than most lasers. It looks like toner cartridges easily install, It does the auto double-side but you can turn that off before you hit print. I'm not sure if you can set default to single print? Please let me know if yo can. The only real drawback because I print brochures, etc, is I lost some print quality that I would have expected from a laser. My husband's ink jet is about same quality. Even on high quality paper I can see a bit of difference, and with light weight paper I can really see a difference. If you're not as picky about print quality as I am, it's still good. I just got used to years of super quality printing. So for important jobs I think I will keep the old guy and spring for the toner.
Read more
3 people found this helpful
Helpful
Comment Report abuse

Kristen Vasquez
5.0 out of 5 stars I love that I can print from my phone. Great quality prints.
Reviewed in the United States on April 16, 2020
Verified Purchase
This is the best printer I have ever had. I love the fact that I can print directly from my phone, even though it cost a little extra. I would definitely recommend this printer to anyone looking for a great quality, fast printing.
Read more
7 people found this helpful
Helpful
Comment Report abuse

Joseph Daniel
5.0 out of 5 stars so far so good!
Reviewed in the United States on April 16, 2020
Verified Purchase
So far the printer has been a delight. Stays connected, even if I haven't used it in a day or two. Fast printing. I still haven't gotten to printing photos on photo paper yet I did print a test photo on normal paper and it printed fine! Yes, Laser jets are more expensive but way better than buying ink all of the time. You get what you pay for!
Read more
5 people found this helpful
Helpful
Comment Report abuse
See all reviews from the United States

Page 1 of 1 Start overPage 1 of 1
This shopping feature will continue to load items when the Enter key is pressed. In order to navigate out of this carousel please use your heading shortcut key to navigate to the next or previous heading.
Back
Next
Pages with related products. See and discover other items: Explore Laser Printers