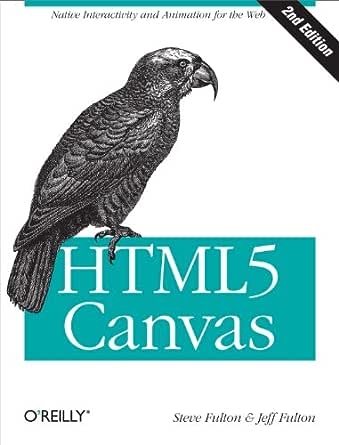 Flip to back Flip to front
Audible Sample Playing... Paused   You are listening to a sample of the Audible narration for this Kindle book.
Learn more
ISBN-13: 978-1449334987
ISBN-10: 1449334989
Why is ISBN important?
ISBN
This bar-code number lets you verify that you're getting exactly the right version or edition of a book. The 13-digit and 10-digit formats both work.

Native Interactivity and Animation for the Web --This text refers to an alternate kindle_edition edition.

Steve Fulton is an author, speaker, and game development professional. He works at Mattel Toys as Sr. Manager Of Software Development for the Digital Play division.

Jeff is an R.I.A. web and mobile game/application developer who has been cultivating an audience for news, stories, blogs, and tutorials about Flash, Corona, and now the HTML5 Canvas at his own website (http://www.8bitrocket.com) for the past five and a half years. Jeff is currently the Chief Technology Officer at Producto Studios (Productostudios.com) and can easily be found on Twitter daily using the handle @8bitrocket.

3.6 out of 5 stars
3.6 out of 5
21 global ratings
How are ratings calculated?
To calculate the overall star rating and percentage breakdown by star, we don’t use a simple average. Instead, our system considers things like how recent a review is and if the reviewer bought the item on Amazon. It also analyzes reviews to verify trustworthiness.
Top reviews

Kjetil E Samuelsen
2.0 out of 5 stars Mostly about games, not how to best use the canvas API
Reviewed in the United States on February 11, 2021
Verified Purchase
I was hoping the book would explain how to optimize rendering, but it had very little about that. Instead the book was mostly about making games. Fine if that is what you are interested in, otherwise stay clear.
Read more
Helpful
Report abuse

T. Bowers
3.0 out of 5 stars More about gaming, not as much about the canvas specifics.
Reviewed in the United States on June 16, 2014
Verified Purchase
Maybe it's me, but I didn't get as much out of this book as I expected. I think I read the first 3 chapters and found some helpful information there, but after that the book quickly launched into gaming aspects and I quit reading. Given the content of the book it should have been titled 'Canvas Gaming' or something like that. It's fine that the book is about gaming, but it was so much about gaming it didn't delve into a lot of the aspects about canvas. For example, aspects like mouse coordinates and canvas position, like relative, absolute, static, etc. I had to look aspects like that, and more, on the internet. I expected those aspects to be covered in the book. The book covered canvas basics, then quickly progressed to complex canvas aspects. It went from foundational things straight into gaming. I hoped it would have contained all the intermediate aspects too. Not everyone wants to develop a game. I don't. I need to develop a canvas for the development of image maps and signature capture. Knowing what I now know about the book I would not have purchased it. I don't think I should buy a book on canvas and then need to search the internet for answers to a bunch of canvas aspects not covered. I wanted a book to avoid that. Looking some uncommon aspects up is expected, but not the majority of those I need. And, maybe some of the aspects I need are HTML5 aspects, but they directly affect the use of canvas and need to be coded up to us canvas correctly and fully, so I expect them to be covered. Again, maybe it's just me, but that's my opinion. So, I gave the book 3 stars for - It's Okay.
Read more
18 people found this helpful
Helpful
Report abuse

Darrel Staat
1.0 out of 5 stars One Star
Reviewed in the United States on July 30, 2018
Verified Purchase
Could not use it.
Read more
Helpful
Report abuse

Jeff & Wendy S
TOP 1000 REVIEWERVINE VOICE
5.0 out of 5 stars Everything you ever wanted to know...
Reviewed in the United States on May 30, 2013
Verified Purchase
...about 2D graphics in Javascript. It's such a joy to program in Javascript, especially writing games like in the golden age of home computers. The authors of this book have that passion and it shows through tons of information and numerous practical code examples. If you have a basic background in programming and game logic, this book will help you create fun graphics-centric games for the web. Over 700 pages of coding goodness.
Read more
3 people found this helpful
Helpful
Report abuse

Amazon Customer
4.0 out of 5 stars Four Stars
Reviewed in the United States on December 26, 2014
Verified Purchase
Will get you up to speed i now time.
Read more
Helpful
Report abuse

Mike
3.0 out of 5 stars Generally good. Covers a lot, but lacks focus
Reviewed in the United Kingdom on November 9, 2014
Verified Purchase
After working through the second chapter I was already becoming comfortable with using the Canvas for drawing vector graphics, which is most of what I wanted out of it at the time. The book continues to describe rendering text, and then images while kind of wandering off into the domain of game development. I think games provide a good scenario to cover subjects like animation, optimising rendering and input handling, but this books seems to digress into a full blown development manual. Most of the book is about making games and a lot of it has nothing to do with HTML5 Canvas. For example: Almost 30 pages are dedicated to an algorithm called A* which is described in the book as "a grid-based path-finding algorithm used to find the shortest 'node' path from point A to point B." No it's not: A* is an abstract search algorithm that can be applied to pretty much any positively weighted graph with a known start state and goal state and where an admissible heuristic can be applied to guide the search. Personally I'd prefer it is this book was shorter and focused more on the subject.
Read more
One person found this helpful
Report abuse