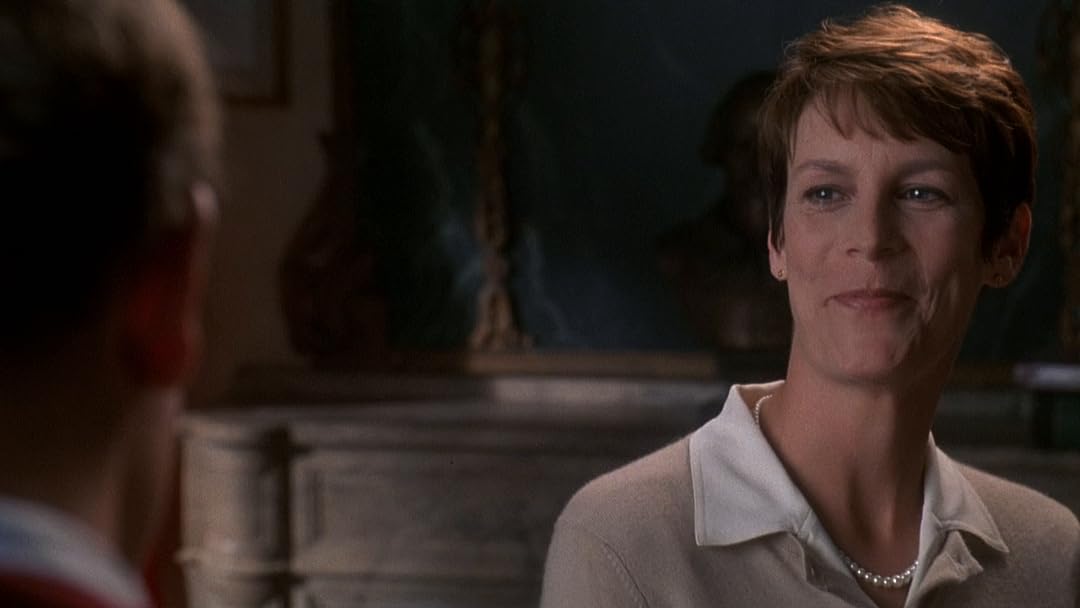 Leaves AMC + in 6h 22mRentals include 30 days to start watching this video and 48 hours to finish once started.

joel wingReviewed in the United States on March 25, 2021
1.0 out of 5 stars
Jamie Lee Curtis returned to the franchise but she should've said no
Verified purchase
A young Joseph Gordon-Levitt is found with an ice skate in his face. What a way to start a movie! The main draw was that Jamie Lee Curtis returned to the franchise that made her famous. She should have said no.

Curtis sees Michael Myers everywhere which helps set the mood. Unfortunately when Myers does show up the film starts going for stupid gimmicks like a girl can’t pull her dress from under a guy’s leg and being afraid of getting something out of a sink. This is akin to the obligatory girl running from guy with knife and suddenly falls down for no reason or jumping in a car and it won’t start. Oh I forgot they did throw in the car won’t start as well. It does try to redeem itself with Curtis standing up to Michael but the damage had already been done.

JeanReviewed in the United States on October 17, 2017
5.0 out of 5 stars
Halloween, Laurie Strode and Micheal Myers. What's not to love?
Verified purchase
Halloween, Laurie Strode and Micheal Myers. What's not to love? The only thing that annoys me, and that's not just with this movie but with many of them, is that the protagonist is on the highest possible alert, well armed and looking in every direction and somehow either the antagonist or someone harmless manages to approach them so closely that they could literally lick them and they don't see them. That's just a personal pet peeve with pretty much any horror movie. Other than that, this is as good as any movie. The acting is well done and it's not too dark to see the bad guy and/or what's happening.
10 people found this helpful

DEWEY M.Reviewed in the United States on November 29, 2012
4.0 out of 5 stars
"THE RETURN, AND REVENGE, OF LAURIE STRODE"
Verified purchase
"Halloween: H20" is an almost perfect "end" to the Halloween Saga. I'll state why it is almost perfect at the conclusion of my review.
Apparently, Jamie Lee Curtis had the idea to do a 20th Anniversary Halloween film because she wanted resolution for her character, original "Halloween" heroine Laurie Strode. That is an inspired idea. "H20" sensibly ignores/disregards the events of "Halloween IV, V, and VI" (Great-- because I never bothered with those sequels, anyway). "H20" brings everything back full-circle by bringing everything back to Laurie. The original working title of this film was "Halloween 7: The Revenge Of Laurie Strode." Laurie may have survived the original murder massacre of her "brother" Michael Myers (which comprise the original "Halloween" and "Halloween II"), but she is, in many ways, a psychological and physical mess. In order to escape the terror of Michael Myers, Laurie faked her own death. Living under the new name of Keri Tate, she had a son named John (Josh Hartnett) and became a teacher at the exclusive and private Hillcrest Academy in California. She is also a "functional alcoholic", using several medications to help with her re-occurring nightmares of Michael Myers. As a mother, she is overprotective and paranoid, and John is growing tired of acting as his "mother's keeper." To be whole and free again, Laurie must battle Michael Myers on Halloween, 1998-- exactly 20 years after the original nightmare began.
"H20" functions successfully as a homage to other films; most specifically the original "Halloween" and Alfred Hitchcock's "Psycho" (1960), the classic horror film that inspired IT. A classmate tells John that if he remains so attached to his mother, he will end up running a deserted hotel off some deserted highway-- a direct reference to "Psycho." Janet Leigh, mother of Jamie Lee Curtis and star of "Psycho", has a small role as Laurie's secretary. We even see Leigh with the original car she famously drove in "Psycho." Recalling the original "Halloween", it is especially nice to see Nancy Stephens briefly reprise her role as nurse Marion Chambers from "Halloween" and "Halloween II." It is mentioned that Chambers was the devoted assistant and care-taker to Dr. Sam Loomis ( the late Donald Plesence) who pursued Michael Myers throughout "Halloween I, II, IV, V, and VI." Chambers' discovery that Michael Myers has broken into her home and stolen the private file on Laurie Strode sets the plot of "H20" in motion. When John's girlfriend Molly (Michelle Williams) asks why his family does not celebrate Halloween, he casually answers, "We have a serial killer in our family who kills people on Halloween." Of course, Michael Myers does show up at Hillcreast Academy for some 20th Anniversary murders. But, like the original "Halloween", the emphasis in "H20" is on suspense instead of graphic murders, so the body count is surprisingly low.
The climax/resolution between Laurie and Michael Myers is enormously satisfying; both dramatically and psychologically. It is an almost perfect "end" to the "Halloween Saga"; meaning that THIS SHOULD HAVE BEEN "THE END." But somebody came up with "Halloween: Resurrection", which negates everything in "H20". But, as "H20" ignores/disregards "Halloween IV, V, and V", simply ignore the "Resurrection" and let "H20" be the perfect end to the Halloween series.
The Dimension Collector's Series DVD features a Behind The Scenes Featurette, a "Halloween Trivia Game", and a Music Video.

JMR1022Reviewed in the United States on November 29, 2018
4.0 out of 5 stars
Laurie 20 years later
Verified purchase
The new timeline after the original Halloween and 2 which takes place 20 years later where Michael finds a way back into Laurie's life, who has gone into hiding and is a headmistress at a school where her teenage son goes too.

From Laurie's PTSD of Halloween and it bleeding into her being an overprotective parent to her son, it causes some tension between the two but does get resolved in a way.

I actually liked this canon for how 90's it is and LL Cool J plays a security guard. Does Laurie resolve her issues with her brother Michael? Well if you watch Ressercution (only once, that's my warning), then you get the answer however with the showdown this feels like a good conclusion.

Lot's of 90's era tropes which is corny when watching now but very entertaining. Michael is a little less supernatural and more "obsessive guy that stalks a girlfriend" as I see it.

Ben30Reviewed in the United States on March 31, 2014
1.0 out of 5 stars
THIS H20 ECHOBRIDGE ENTERTAINMENT BLU-RAY IS S***, BUY THE NEW SCREAM FACTORY/ANCHOR BAY RELEASE
Verified purchase
If you're a big fan of this 7th sequel of Halloween called Halloween H20
Then Don't buy the 2011 Echobridge ent' release
this is the barebones release and has no extras at all, total waste of money.

Scream factory/Anchor bay have just released a new 15 Disc blu-ray boxset
containing all the Halloween films, one of them is H20
Scream factory produced all new special features for H20
a new 1 hour Making of Documentary with recent cast and crew interviews
plus a brand new Audio commentary with Director Steve miner
plus vintage interviews and behind the scenes footage from the Miramax DVD release
plus Scream factory and Anchor bay have worked together to clean up the blu-ray transfer
from the Echobridge ent' release

Fan 1Reviewed in the United States on December 4, 2014
4.0 out of 5 stars
The night he found her
Verified purchase
Maybe it was or maybe it wasn't a good idea to ignore the events in 4-6. Things started off promising and then went downhill after part 5. Part 4 ended with Jamie Lloyd killing leading us to believe that she was going to be like Michael Myers but instead she has some psychic link with her uncle and practically a mute throughout the film. Having Michael cry in one scene sort of made the character weak and the two idiot cops with the silly music playing made it worse. Then part 6 took years to come out because of the studio re doing the film, re writing the script, and not have Danielle Harris to return as Jamie Lloyd as well as killing off the character instead of leaving her as the star like the other films. The producer's cut of the film was better than that mess made on the theatrical version which pretty much hurt the franchise until it started off fresh with H20. I admit 4-6 made Michael into Jason Vorhees like crushing skulls with his bare hands and using whatever weapon he could find. He was better off as John Carpenter called him an unstoppable force of nature rather than a killing machine being controlled by a cult. People could label the Halloween series as a trilogy with part 1, 2, and H20 which makes some sense and the way the film ended should have been it. We can all ignore Resurrection due to the fact it was ridiculous having Michael in some reality show and a paramedic having his head chopped off instead of Myers was dumb to begin with. Still H20 is good and suspenseful with a few elements from the first two films connecting all three nicely. I wish there was an extended cut of the film with the extra footage that's shown only on FX.
4 people found this helpful

JefferyReviewed in the United States on October 26, 2017
5.0 out of 5 stars
An ultimate classic....
Verified purchase
Classic! Recall watching this as a teenager for the first time at a drive-in theater, lying on the top of my parents station-wagon. My Lord, everything in that last sentence is completely foreign to the teens of today! Ha, my gosh, life sure seems to fly by.
5 people found this helpful

The Cobb'sReviewed in the United States on September 14, 2018
5.0 out of 5 stars
Fast Delivery & Great Condition
Verified purchase
I purchased this as a gift for my son. He has all of the Halloween movies on DVD except this one. I could not locate a new DVD, so I decided to take a risk on purchasing a previously used one. Shipping was great and the condition of the case and DVD appear to be great. I am not sure if my son has actually watched it yet, but I don't foresee any issues with it. What an awesome find for me & he was very surprised!
One person found this helpful
See all reviews
Back to top
Get to Know Us
Make Money with Us
Amazon Payment Products
Let Us Help You
EnglishChoose a language for shopping. United StatesChoose a country/region for shopping.
© 1996-2021, Amazon.com, Inc. or its affiliates