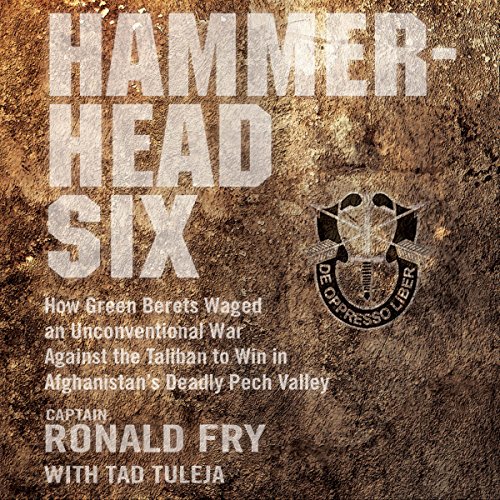 Hammerhead Six: How Green Berets Waged an Unconventional War Against the Taliban to Win in Afghanistan's Deadly Pech Valley

Two years before the action in Lone Survivor, a team of Green Berets conducted a very different successful mission in Afghanistan's notorious Pech Valley. Led by Captain Ronald Fry, Hammerhead Six applied the principles of unconventional warfare to "win hearts and minds" and fight against the terrorist insurgency.

In 2003, the Special Forces soldiers entered an area later called "the most dangerous place in Afghanistan". Here, where the line between civilians and armed zealots was indistinct, they illustrated the Afghan proverb "I destroy my enemy by making him my friend." Fry recounts how they were seen as welcome guests rather than invaders. Soon after their deployment ended, the Pech Valley reverted to turmoil. Their success was never replicated.

Hammerhead Six finally reveals how cultural respect and hard work (and the occasional machine-gun burst) were more than a match for the Taliban and Al Qaeda.

Enjoy a free audiobook + more
Learn more about Membership
List Price: $29.65
You Save: $3.71 (13%)
By completing your purchase, you agree to Audible’s Conditions Of Use
Sold and delivered by Audible, an Amazon company
Share

4.7 out of 5 stars
4.7 out of 5
274 global ratings
How are ratings calculated?
To calculate the overall star rating and percentage breakdown by star, we don’t use a simple average. Instead, our system considers things like how recent a review is and if the reviewer bought the item on Amazon. It also analyzes reviews to verify trustworthiness.

Stephen J. Britt
5.0 out of 5 stars A Good Book About a Bad War
Reviewed in the United States on December 31, 2016
Verified Purchase
John:

Sadly, that’s the point. From 2003, to 2009, to today, nothing has changed. Nothing is different despite American dead, wounded, crippled or damaged, and despite billions of dollars spent on arms, fraud, and theft in “winning the hearts and minds” of Aghans. Afghanistan in 2017 is the same as Afghanistan in 2003. This was years of inexcusable, pointless waste and incomprehensible arrogance, at every level.

That takes nothing away from the guys who wrote these two books. “Hammerhead Six” is about a Special Forces detachment from the Utah National Guard (!), most of whom are Mormons. They are sent out to set up an outpost (“Forward Operating Base Blessing”) in the heart of Indian Country. Viewed from close up, their story is interesting, nerve-wracking, and inspiring. These guys are trying to win the “hearts and minds” of the local Afghans. They did their best. Fry, the author, is blunt and straightforward about his time there. It is a good read.

“Pale Horse” is written by an Army “lifer “ who commands an air cavalry squadron. They arrived in 2009 to fly helicopters in support of U.S. soldiers operating in the valley. The flying descriptions are outstanding, riveting; the bigger picture about the U.S. effort in Afghanistan gets in there too, although the colonel does not address it directly. This book is “technical,” as there is a lot of Army flying jargon, and acronyms. Being career military (different from the National Guard green berets, i.e. reservists like me), the author is not critical of the Army idiots who were running the war. The book does contain a fair description of the debacle known as Combat Outpost Keating (October 2009), in which 300+ mujis overran a thinly defended firebase way up the valley. The base was accessible (by Americans) only by helo. The author is careful not to malign the Army boobs who put this suicide firebase at the bottom of a valley, with no plan to occupy the hills that looked down on it. Evidently Army officers are trained differently than we, and terrain is not significant for them. You will gasp when you see the photos of Keating. The “Pale Horse” squadron evacuated the Keating base just before they rotated home.

The U.S. abandoned Camp Blessing in 2010. I believe the last Americans were pulled out of the Pech Valley in 2010; it belongs to the Taliban now. “Hammerhead Six” and “Pale Horse” and all the rest were for naught.

I am reading “the Last Punisher” now. Only about a third of the way through, but so far it is less interesting than “Hammerhead Six” and “Pale Horse.”
Read more
13 people found this helpful
Helpful
Report abuse

WiltDurkey
5.0 out of 5 stars >The lessons learned on that mission would serve as a model for success in unconventional warfare.
Reviewed in the United States on October 30, 2017
Verified Purchase
Fascinating book, easily read, even for the more pacifist among us. Or, to put it differently, very little gung-ho stories about rooting out the bad guys.

Instead, the officer in charge quickly realized that he had to get, and stay, on the good side of the locals to win his local war. And to do so, he had to be genuine and honest in his interactions with them.

Unfortunately, there is no sign that the lessons learned were put to any use by the US command - the region quickly reverted to a mess after their departure.

It might be tempting to dismiss it as another "if they'd all done things like I did, we'd have won" narrative.

Two things speak against that: first, Captain Fry does not spare himself in revealing what must have been a very, very, distressing event, directly caused by him, in his tour. Second, not one of his US soldiers dies - if you're aware of the significance of his unit's location right next to Pakistan and the Korangal, you might come to the conclusion that he must have been doing something right.

What it’s not: action packed. Nothing wowanting to read those. But this not it.
Read more
6 people found this helpful
Helpful
Report abuse

PowerFox
5.0 out of 5 stars They make us all proud to be Americans!
Reviewed in the United States on September 24, 2017
Verified Purchase
I was a Green Beret in the same group these men were in, but I am a bit older than they are so I wasn't in the unit anymore by time they all began their military service (by over 10 years). Consequently, I have a much better picture of the inner workings of an A team than the average person. I must say, these guys did us all proud. I salute them all, and hope that their approach to working with indigenous people is followed by A-teams and other military units for decades to come.

I so enjoyed reading this book that I finished the whole thing on a long flight to Asia. It's an easy read, and keeps you interested the entire time. It worried me to think that when they left Afghanistan their successful approach might not be followed by other military units. Respect for other cultures and people, and other's way of life brought them respect, and success on their mission. Way to go guys. Now if only those at the top in our government followed this same advice perhaps this world would be a better place.
Read more
7 people found this helpful
Helpful
Report abuse
See all reviews

Scott Andrews
4.0 out of 5 stars An honest and insightful account from an SF team commander. Recommended Reading!
Reviewed in the United Kingdom on April 6, 2017
Verified Purchase
An honest and insightful account from an SF team commander. I found this book very enjoyable, it isn't as gun-ho as one might expect and teaches some useful lessons about a culture most westerners would struggle to understand and (More importantly) the daily challengers the team faced. I found at times this book wasnt as well written as it could have been and repeats itself a little, however its important to keep in mind its one guys account of his experiences. So i found myself grateful for the fact he's shared his story and the tremendous job is team did while in the Pech.
Read more
Report abuse

Ian Edwards
5.0 out of 5 stars My favourite Afghanistan memoir
Reviewed in the United Kingdom on March 7, 2019
Verified Purchase
I have read a lot of books written by those who served in Afghanistan, and I'd say this is my favourite. A very interesting portrayal of the different approach taken by US Army SF.
Read more
Report abuse

Rory Culliton
5.0 out of 5 stars Win war with support - a possible alternative.
Reviewed in the United Kingdom on April 13, 2017
Verified Purchase
Excellent insight into the gentle strategy of winning hearts and minds in Pesz Valley in Afghanistan.
Read more
Report abuse

Amazon Kunde
5.0 out of 5 stars An interesting and fascinating report
Reviewed in Germany on July 19, 2017
Verified Purchase
Very interesting and detailed story!It is an impressive view behind the real life!Not much self heroic stories! Very good military report!
Read more
Report abuse
See all reviews
Back to top
Get to Know Us
Make Money with Us
Amazon Payment Products
Let Us Help You
EnglishChoose a language for shopping. United StatesChoose a country/region for shopping.
© 1996-2022, Amazon.com, Inc. or its affiliates