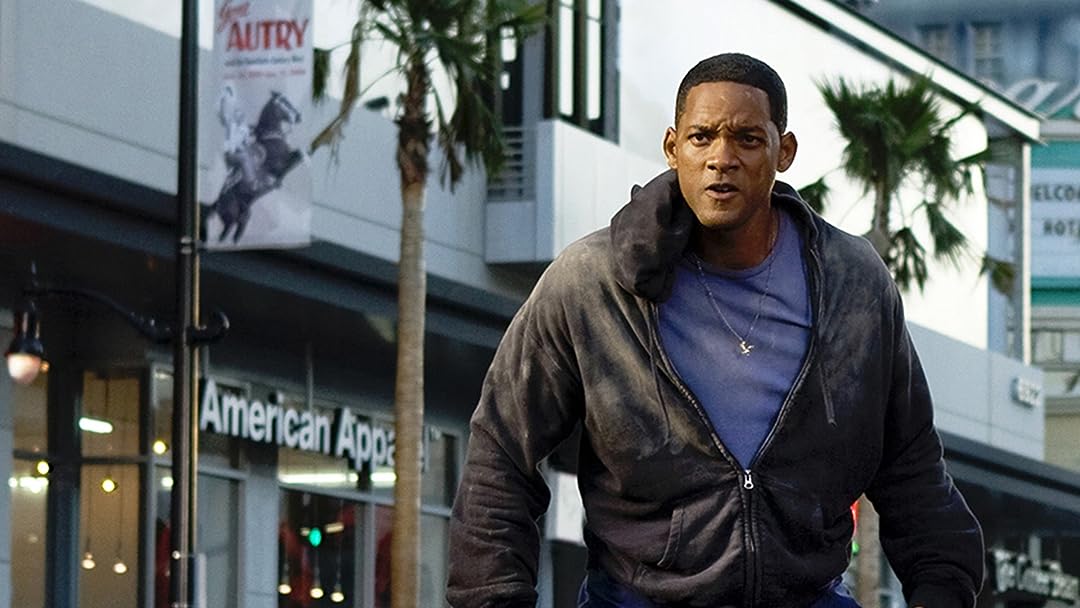 (6,549)
6.41 h 28 min2008X-RayPG-13
Academy Award® nominee Will Smith (Best Actor, The Pursuit of Happyness, 2006) stars in this action-packed comedy as Hancock, a sarcastic, hard-living and misunderstood superhero who has fallen out of favor with the public. When Hancock grudgingly agrees to an extreme makeover from idealistic publicist Ray Embrey (Jason Bateman, Juno), his life and reputation rise from the ashe...

LaurynGReviewed in the United States on September 13, 2019
4.0 out of 5 stars
Bateman makes it memorable
Verified purchase
It's strange: I love Will Smith's work most of the time, and he does a great job in this film. Charlize Theron is pretty good, too, and I have a lot of respect for her. But while this film isn't great film art, I've watched it several times and find the characters fascinating. It's the way Jason Bateman plays his character with so much heart. (Forgive the obvious pun, for those of you who have seen the film.) He makes the rest of the superhero absurdity human (whoops, there's another one), and elevates the importance of the wonderful actor who plays his son. They are a wonderful duo who endure horrible things, and show us real heroism in a story that makes points by throwing children a mile into the air and hurling refrigerators into the street. I like superhero movies, but it only works if we not only see but **feel** the difference between these demi-gods and the puny humans affected by their powers. Somehow, this film does it, and I suspect there is no small credit due to director Peter Berg, who has proven himself again. The CG and several other elements of the film feel off, but it's the portrayals that make it work. This especially includes the wonderful Eddie Marsan, who is one of the best villains ever.
18 people found this helpful

H. P. for life.Reviewed in the United States on January 27, 2017
5.0 out of 5 stars
I for one love Handcock. To me this is a great story ...
Verified purchase
I for one love Handcock. To me this is a great story that shows that no matter how powerful you are if you don’t know who you are you can’t be happy. Handcock is a Superhero who knows that he wants to do good but can’t understand why, he doesn’t understand that is why he was made. So he does the work but can’t find any kind of fulfillment because he doesn’t know who he is and this leaves him empty and he is unable to find any joy in what he does so his heart is not in his work. He’s a man who saves everyone and is cared for by no one. That’s is where Ray comes in. He sees past the man and to the heart and sets out to do all he can to help. And that is what makes this a great move to me, it shows how we all need an identity in this world not just something that is given to us but something that we make our own, and that we need other in our lives who will help us.
42 people found this helpful

Talara MastersReviewed in the United States on December 22, 2019
1.0 out of 5 stars
It is a VERY LONG wait before it finally..........
Verified purchase
SO MANY TIMES I WANTED TO TURN IT OFF & GO TO SOMETHING ELSE...and I kept thinking...it'll get better....surely it will get better....it can't keep going like this...it really can't can it??? I had these images of will...spike lee...ice t...martin Lawrence...etc....all having drinks & whatever is their favorite choice of....lets put it like....seasonings in their special locked places. Got the blunts going & lots of drinks & all the idea's coming up is like they are the only ones who think this is actually good & no it wasn't..!! Don't misunderstand...I have liked Wil Smiths gifts...excellent actor...he comes off as a clean Soul person...and I think that is effecting accepting him in such a role...the energies were not mixing well & the lines were as tho nothing was well thought threw. felt like really bad slap stick comedy. This looking like a homeless alcoholic homeless bad mouth attitude...terrible clothes......I think it would've been a better movie if they just kept him in that attire & for over a hour he is standing on a main corner downtown New York and the only he is doing is...scratching his scrotum. I'm not really sure why this movie was made...perhaps it is Wil & some of his buds decided to make a movie themselves using their own money & throw it out there n see how it does. Fame or bust...going to be either one & actually my vote is bust. The only time it got good...and it was really good too was....right at the "very end". You won't be able to jump thru the movie to get to that part so you are not wasting so much of your time for you'll need the fore knowledge to understand what was given at the end. That's all I can say w/out doing any spoilers. If I could give it a zero I would very much so consider it, but since at the end that was really good I'll give it a start for that. My final evaluation....I wish I had never watched it
11 people found this helpful

SamIamReviewed in the United States on April 12, 2021
2.0 out of 5 stars
Movie Edit so disappointing.....
Verified purchase
I was completely disappointed that the editor of this movie for Amazon Prime decided to leave out two of the most important lines during the most poignant part of the movie.

During the formal dinner seen when Hancock is explaining what little he remembers of his past the dialog is:

HANCOCK: What kind of Bastard must I have been, that nobody came to claim me? I know I am not the most charming person, so I am told but.....Nobody?
CUT to MARY (eyes welled with tears)
Cut to scene where Hancock is carrying Ray to bed.

CUT to MARY (eyes welled with tears) I'm sorry....
HANCOCK: Why, you didn't do nothin.

This foreshadowing pays off later in the movie when we find out that Mary is actually the same as Hancock and is his wife. You then realize the true meaning of her apology and the guilt she must feel by the innocent albeit, unaware response from Hancock.

Maybe you could go back and include this back into the movie and maybe cut some of the time down showing one prisoners head being shoved up the hind quarters of another prisoner.

joel wingReviewed in the United States on November 12, 2020
4.0 out of 5 stars
Tries to change the superhero genre but not quite
Verified purchase
Hancock was an attempt to change the usual superhero story. This time the main character John Hancock (Will Smith) was a disinterested character. He really didn’t like fighting bad guys and would rather drink instead. He was also careless and usually did as much harm as good. It wasn’t until a struggling public relations executive named Ray Embrey (Jason Bateman) takes an interest in him that Hancock tries to straighten his act out. The problem is Ray’s wife Mary (Charlize Theron) has history with Hancock that complicates everything.

How Hancock was different from your run of the mill hero flick was that he doesn’t really care and when he chooses to intervene he usually screws things up. He’s set up as an anti-hero at first. Booze is his friend and bad guys are just an annoyance.

Along the way there are plenty of jokes as well like when Hancock saves Ray and then insults the crowd that gathered around. One guy says that Ray should sue Hancock for the damage done to his car. Hancock replies that the man should sue McDonalds for being fat. Again, this is another element of Hancock as the anti-hero. He doesn’t care what people think about him. In fact, he has an adversarial relationship with the public.

The story then focuses upon whether Ray can change Hancock into an actual hero. This is where the story actually becomes conventional because you know where it’s going to go.

The twist with Mary was unexpected. The problem however was you knew that Hancock was going to change. It was just a matter of how long it would take. That’s why I said this was an attempt to change the superhero genre. It’s still good however and there are plenty of laughs as well.
C
2 people found this helpful

JohnNEReviewed in the United States on October 25, 2018
5.0 out of 5 stars
Will Smith is still one of my favorite actors. I believe he's both an awesome guy ...
Verified purchase
I consider Will Smith a 'mostly on, sometimes off' kind of actor. I don't spend a lot of time thinking about it, but I've come up with two influences that I think hurt his decisionmaking on roles.

As important as I think family is, I think his biggest detriments in choosing roles (and views he expresses in public) are first, his wife, and second, his son.

Those two situations aside, Will Smith is still one of my favorite actors. I believe he's both an awesome guy in 'real life', probably, and also chooses great men to play in movies -- and entertaining movies most of the time.

Hancock delivers strongly. 10/10. Super entertaining. A fallible man that can be a real jerk but means well and finds important truths for himself as he navigates his world. I enjoy both parts -- his jerk sides where he's unflatteringly honest and perhaps not considerate enough with everyone, and where he chooses to apply his sense of belonging and societal/cultural influence. Watching him work to find his place in his city and family/friends is time well spent.
7 people found this helpful

T. A. HansenReviewed in the United States on December 8, 2019
3.0 out of 5 stars
Story arc plateau
Verified purchase
This could have been a great movie. The character arc of Hancock is too truncated. The movie tugs at your heart a bit. Good acting by all. Hancock is never fully redeemed in what we see. We know he is redeemed at the end, but we never see that and isn't that what a movie is about-visuals. They probably should have cut the "I have heart," theme and given that time to Hancock actually saving people, after all the movie is called "Hancock," not "I Have Heart."
5 people found this helpful

SergeyReviewed in the United States on April 15, 2021
5.0 out of 5 stars
Review of Reviews
Verified purchase
Ignore the negative reviews, I've read them all, and can see either very little of race related probably News Media employee at it to divide people, some are just from people who isn't into Superhero and romance and what they do for others to prevent evil from destroying the good in this world, and some just probably made a review without watching the movie...
Here is my review: great movie, and full of hope more is made to continue. Will Smith played the role perfectly, and so were the other Actors and Actresses, it is one of my favorite movies of Superheroes of lone comics...
Story made perfect and so are the graphics. No matter what power you have, you can always do good for others, not just to please yourself, If you love someone and want to make them happy, let them go like the bird who want to fly
See all reviews
Back to top
Get to Know Us
Make Money with Us
Amazon Payment Products
Let Us Help You
EnglishChoose a language for shopping. United StatesChoose a country/region for shopping.
© 1996-2022, Amazon.com, Inc. or its affiliates