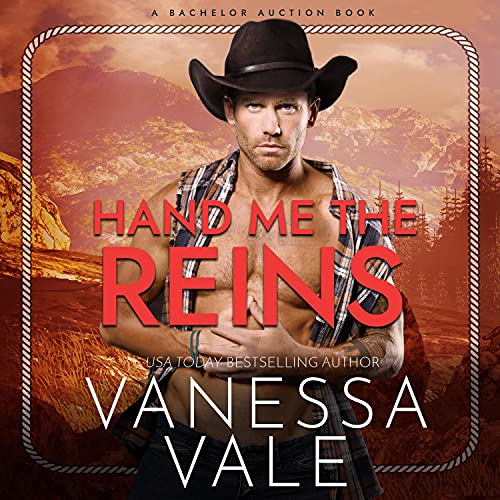 Hand Me the Reins: The Bachelor Auction Series, Book 3

List Price: $17.47
You Save: $2.18 (12%)
By completing your purchase, you agree to Audible’s Conditions Of Use
Sold and delivered by Audible, an Amazon company
Share

4.6 out of 5 stars
4.6 out of 5
343 global ratings
How are ratings calculated?
To calculate the overall star rating and percentage breakdown by star, we don’t use a simple average. Instead, our system considers things like how recent a review is and if the reviewer bought the item on Amazon. It also analyzes reviews to verify trustworthiness.
Top reviews

Denise DeCrescito (From In Here)
5.0 out of 5 stars Great characters in a story that manages to be sweet, sexy and emotional
Reviewed in the United States on June 16, 2021
Verified Purchase
“Hand Me The Reins” is the third book in the Bachelor Auction series by Vanessa Vale. I liked the first two books a lot, but I have to say, this one is my favorite. Each book gives us the story of what happens to one of the three Manning brothers when they take part in a bachelor auction to benefit the library in their small town. This story focuses on the youngest of the three brothers when he gets his turn on the auction block.

Thatcher is a good-natured man who own the successful local bar. He is steadfastly against romantic relationships because he has a deep-rooted fear of the pain and loss he’d feel if such a relationship ended badly. Astrid owns the wonderful bakery in town and she has a problem; she has to go home for her sister’s wedding and if she goes alone, her already horrible family will be intolerable. When I described them as horrible, believe me, that’s actually an understatement. The only normal relative she has is her great-aunt, the town librarian. Her aunt buys Thatcher at the bachelor auction so Astrid can ask him to be her date for the wedding. He’s a really good guy and is happy to help her out, but he can’t understand why she’s so insecure about her appearance because he finds her incredibly attractive. When he meets her terrible family it all becomes painfully clear, as does the fact that the ‘fake’ relationship between him and Astrid is the best relationship he’s ever had. Suddenly, he’s questioning plans and decisions he’s been making about his life.

This story manages to be incredibly sweet and also incredibly sexy. Both Thatcher and Astrid have issues to overcome, and they are such likable characters that as the reader you keep cheering them on. If you read the other books in this series you’ll be happy to see characters from those stories appear in this one. I was excited to see Nix and Kit from “Mountain Darkness” make an appearance, too, which was unexpected but a lot of fun. There are some heartbreaking moments in this story, but I promise that the heartwarming feelings you’ll have at the end make it all worth it.
Read more
2 people found this helpful
Helpful
Report abuse

Ashley A. Carr
VINE VOICE
5.0 out of 5 stars Thatcher and Astrid
Reviewed in the United States on June 15, 2021
Verified Purchase
It’s Thatcher’s turn and he doesn’t want to fall like his older brothers have. He is perfectly content to taking the lady out that wins him, making it worth her while and then leaving. That is until he sees who won him at the auction and her motivations behind it. Astrid is the black sheep and her family and win her great aunt won Thatcher for her she sees it as a perfect opportunity to get a fake boyfriend out of the deal. Then they both catch feelings but the original agreement was a fake boyfriend nothing more, nothing less. Will this sassy and sweet baker be able to rope her cowboy in?
Read more
2 people found this helpful
Helpful
Report abuse

Rose Howse
5.0 out of 5 stars The Baker and the Fake Boyfriend
Reviewed in the United States on June 17, 2021
Verified Purchase
Astrid needs a date for her sister's wedding and her great
aunt bids on Thatcher for her. Thatcher, was surprised that the
town's librarian who won his bid, isn't his date, but her voluptuous
niece is. It's just a date for the weekend of the wedding but Thatcher
sees how Astrid is treated by her family and comes through for her.
Thatcher and Astrid are a great couple and you cheer both of them
on as the situation is revealed. There's only one problem, Thatcher
is leaving for Mexico soon and will be gone for at least 6 months, he
has not obligations at home and Astrid will be alone again once the
wedding's obligations are fulfilled. This was a wonderful story, sprinkled
with some heartbreak, disappointments and tears, but Thatcher sees
the truth and guides Astrid through and shows her what love and loyalty
can be like for the first time in her life.
I love these bachelor auction stories and hope they can continue.
Read more
One person found this helpful
Helpful
Report abuse

Rebecca Bamford
5.0 out of 5 stars Astrid and Thatcher
Reviewed in the United States on June 25, 2021
Verified Purchase
This is the third book in the Manning brother’s bachelor auction to raise money for the town library. In fact, Astrids great aunt buys Thatcher at the auction for her niece so she will have a date to a family wedding. Astrids family is horrible. They are pompous, selfish and judgmental. They also consider Astrid the black sheep of the family. Thatcher is a nice guy and goes to Astrids family wedding as her fake boyfriend. Her wingman. He sees how horrible the family treats her and feels protective of her. Astrid is a baker and her family thinks she’s too fat and too low class for them. But Thatcher thinks she’s the most beautiful, perfect thing he’s ever see. And Somewhere along the way, being a “fake” boyfriend feels all too real. This is a sweet sexy story about two people afraid of getting hurt by love but truly deserve to find their Happily Ever After. You will root for them the whole way. This was one of my favorite stories. Loved it!
Read more
Helpful
Report abuse

Tammy Moldovan
5.0 out of 5 stars Thatcher and Astrid - a swoony fake relationship
Reviewed in the United States on June 26, 2021
Verified Purchase
I love this series and this is my favorite of the books. A fake relationship with a hot swoony cowboy - yes, yes, yes. Thatcher is “purchased” at a bachelor auction by the town spinster librarian, but it turns out his great niece needs a date for a wedding. Astrid is a curvy girl who owns the town bakery. Her family is mean and shallow. She needs Thatcher to be her date as a buffer for her cheating ex, whose the best man, as well as for her family. Thatcher agrees to be her fake boyfriend for the weekend. But it is hard to stay in the fake box. They both have issues with relationships due to their pasts and it was heart warming watching them work through them to get to their HEA. This is a fun, quick, steamy, and heart squeezing read. I’d let Thatcher take the reins any time.
Read more
Helpful
Report abuse

Cindy L Johnson
5.0 out of 5 stars Another hot one
Reviewed in the United States on June 15, 2021
Verified Purchase
Vanessa Vale hits another home run. Hand Me the Reins from the Bachelor Auction series is great! A little of lust, a highly dysfunctional family & a HEA. Great for the beach, or just hanging out at home. Just make sure you have a fire extinguisher, because this book is HOT 🔥🔥
Read more
2 people found this helpful
Helpful
Report abuse
See all reviews

Beap
4.0 out of 5 stars Nice, romantic story.
Reviewed in the United Kingdom on June 29, 2021
Verified Purchase
This is a nice story, nothing tasteless or unpleasant, with some gentle humour.
Read more
Report abuse

patti
5.0 out of 5 stars Fabulous Read!!
Reviewed in Canada on June 21, 2021
Verified Purchase
Fabulous conclusion to this fabulous series!! The hardest to fall was the last book and Thatcher was a goner when he got bought at the auction by Astrid!! Love this series and could not put it down till i was done!! Go grab your copy today and enjoy!!
Read more
Report abuse

Thisbe
5.0 out of 5 stars another Vanessa Vale story I loved
Reviewed in Germany on July 5, 2021
Verified Purchase
Thatcher decided to never get serious with a woman and then he meets the shy baker. Love all stories I read vom Vanessa! Alpha male who falls deep and fast. How he helps her through the difficult family issues and stands by her side, my heart just melted...
Read more
Report abuse
See all reviews
Back to top
Get to Know Us
Make Money with Us
Amazon Payment Products
Let Us Help You
EnglishChoose a language for shopping. United StatesChoose a country/region for shopping.
© 1996-2021, Amazon.com, Inc. or its affiliates