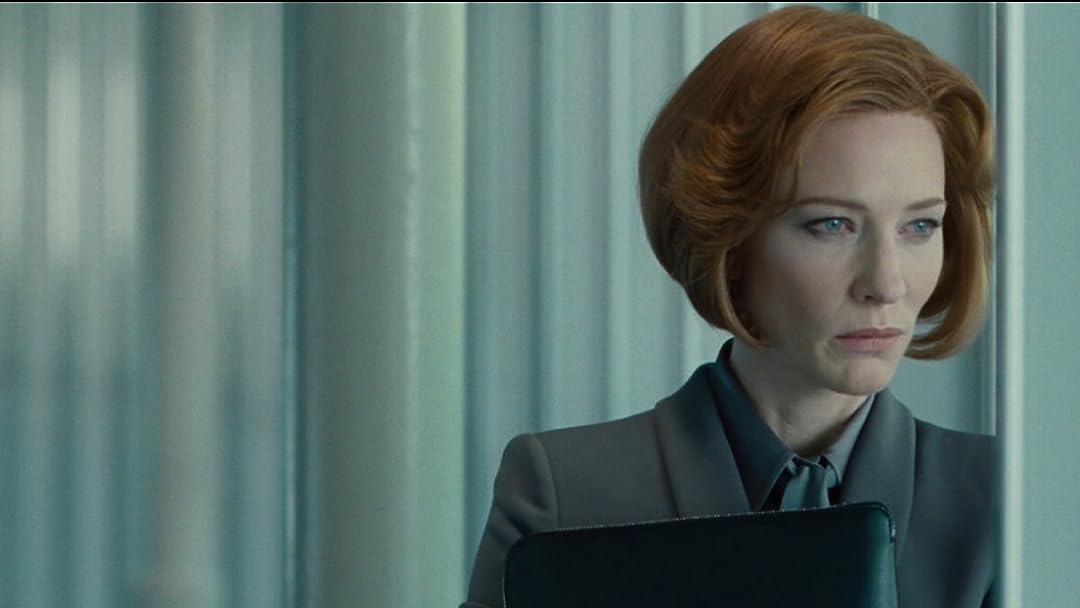 Matthew D'SouzaReviewed in the United States on June 3, 2018
5.0 out of 5 stars
Saoirse Ronan Kills It!
Verified purchase
Hanna is a truly blistering espionage thriller by director Joe Wright. Hanna is probably my favorite film from Wright to date. It is fast paced, exhilarating, and interesting. Wright has crafted a wholly original spy movie that oozes creativity. Every scene has cool shots and wonderfully executed panning shots. Impressive sequence after sequence line every scene of Hanna. You will be amazed and entertained by this movie for sure. Wright perfected the action film with Hanna.

Acting wise, Hanna has a delight cast of characters that emote their respective figures with surrealistic zeal. Saoirse Ronan makes for a deadly killer and a sweet heroine. She is fierce and believable as a spy, while also conveying Hanna's childish nature. Eric Bana is at his best as Hanna's tough, yet kind father. He is very cool as a spy. Cate Blanchett and Tom Hollander are two of the creepiest villains in film history. They will unsettle and threaten you. All in all, Hanna has a well cast ensemble.

Musically, Hanna is exciting and loud with a fresh electronic score from The Chemical Brothers. The bass will blast, the synths will reverberate, and the themes will soar into your ears. Hanna's soundtrack is quite memorable. I have not felt such thrills in a spy thriller since The Bourne Trilogy.

In short, Joe Wright's innovative direction focuses this neat narrative into a non-stop feature. The lovely Saoirse Ronan will captivate you throughout Hanna. You will root for her to triumph. Sit back and enjoy the music, action, acting, and direction. Hanna is divine!

AlReviewed in the United States on February 5, 2019
4.0 out of 5 stars
Tight, stylish thriller with unlikely heroine
Verified purchase
I re-watched this movie after watching the first episode of the 2019 Netflix version. It holds up well as a tight and stylish thriller, featuring Hanna as a teenager with a secret, brought up by her 'father' and trained to be a soldier in the woods (of Finland?). The pair then set out back into the world to seek seek revenge against the killer of Hanna's mother, an evil shadowy (CIA?) spook. Let's just put it this way, she is REALLY well-trained, and you do NOT want to mess with her.
21 people found this helpful

Bob FarrellReviewed in the United States on October 29, 2016
4.0 out of 5 stars
I wasn't inspired but I was entertained
Verified purchase
I had this movie in my watchlist for a long time. The idea intrigued me but I worried that a movie about a kid assassin would be completely devoid of morality and therefore depressing/skivvy, not entertaining. I finally watched it.

It was wonderfully entertaining. It was about getting rid of bad guys. The characters are well done and I really connected emotionally with the father and daughter. Saoirse Ronan was amazing in this (and has since gone off and done even more amazing things).

The pace is slow but stays interesting. Clearly, the well-honed assassin was going to do something great (not awful). The spectacular cinematography is compelling while the story slowly builds to the point. The camera angles, changes in perspective, and lighting jumped out as particularly artistic.

Once the story gets to the point, the fight scenes were well done and kept real (no silly Kung Fu) but I had come to expect that Hanna would be a little more decisive in her battles. For all that training and being the perfect assassin, the fights lasted too long. The SIGNIFICANTLY less capable bad guys shouldn’t have lasted more than a few seconds. I accepted the premise that she was a highly honed weapon and suspended belief. The director/writers didn’t for some reason and went too far trying to make it too real.

But getting passed that disappointment, the chase, interspersed with character development and fight scenes, is suspenseful and entertaining. It has flaws, some quite irritating, but I still liked it. I wasn't inspired but I was entertained.
37 people found this helpful

HooeeReviewed in the United States on November 2, 2019
1.0 out of 5 stars
For once, the remake is better; much better.
Verified purchase
The 2019 series beats the movie hands-down. Binge-watching the series, I went to review it, but then read all of the one-star reviews about how the movie was so much better. I thought I'd give it a fair shot. Even paid for this. It wasn't better. THIS is your one-star attraction.

You think this Hanna is a stronger lead? I found her to be even more timid and ridiculously out of touch for someone taught 4+ languages, world history, and other major subjects. The series Hanna bothered me with that as well, but the movie Hanna is far worse.

And what is with this cheesy 1980s suspsense music? I mean seriously what the hell. It was 2011, not 1981.
Saorise is a good actress, but I think Esma has by far the better presence. I see complaints about Esma seeming to be too timid, but the scenes in the series are direct, in your face, and at times brutal. Even the scene in the movie in the container yard, there was an opportunity for the Saorise Hanna to completely lay them out, and she doesn't. The final scene is so bland and devoid of emotion. You would think there would be some kind of character development, in spite of it's much shorter time in which to do it, but there is just nothing.

I thought for sure the movie would be more fast-paced, since Hanna Season 1 (2019) had 8 hours to do it. I was wrong. The Hanna movie is slow, drawn out, and boring as hell. This extra time gave for some pivotal development with Sophie as a friend, which allow Hanna to come out of her robotic shell and express actual feelings at times.

This movie isn't all it's cracked up to be. I think people over-glorified it, just because it was the original.
12 people found this helpful

my morning reviewReviewed in the United States on January 29, 2018
4.0 out of 5 stars
a german, an american, and a genetically engineered teenager who just wants to have some fun somewhere.
Verified purchase
very unique and good performances by all, except, oddly, the great actress Cate Blanchett. But the young Hanna, Saoirse Roana from Lovely Bones, does a great job as a
rather unempathetic genetically engineered girl who doesn't want to hurt anybody but.. if you force me. she is not as frightening as "Morgan,' but just as thorough, just as dangerous in the long run. The performance of Tom Hollander is the counter weight to Cate Blanchett. She is poorly cast here, why not just get an American who does a southern accent if you must have that. It is badly drawn. His character is frightening, a memorable badguy, all the worst attributes of Gemans rolled up into one little phsycopath. His pursuit of Hanna is disturbing.
Eric Bana is very good in this movie. I found him as convincing as he was in Munich, maybe more so, a simple performance but
complex in the confusion he feels about his role with Hanna.
9 people found this helpful

W. CulverhouseReviewed in the United States on May 20, 2022
3.0 out of 5 stars
The Amazon series is far, far better
Verified purchase
I've watched all three seasons of Amazon's Hanna multiple times: they are that great! I only wish Amazon had planned even more seasons!
So when I saw the earlier, film version available, I quickly selected it, settled in, and watched with anticipation.
It was good, but not great. The film's storyline is roughly comparable to that of Season 1 of the Amazon series. But the Amazon series is far better in all respects. Some of that certainly is that the Amazon series had more time to develop the characters and draw us into the story. But significantly, the Amazon cast- especially Esme Creed=Miles and Mirelle Enos- are far more convincing in their roles. Am I the only one who found Kate Blanchette's 'southern accent' overdone and annoying?
Watch the Amazon three-part series. It is really worthwhile. And if you find yourself with time to waste, rather than taking a nap, watch the film version.

joel wingReviewed in the United States on June 14, 2020
4.0 out of 5 stars
A new take on the action thriller featuring a child warrior
Verified purchase
Hanna was very different from your normal action thriller. That’s because it starts out in the wilderness of Finland where Erik Heller (Eric Bana) has raised his girl Hanna (Saoirse Ronan) in survival tactics. They want to get back at a CIA agent named. Marissa Wiegler (Cate Blanchett). This is their story of revenge.

The movie is much different from your usual action flick. First it features a teen girl instead of your usual lead. Second, she’s like a babe in the woods because she’s never seen things like a phone or electricity before. Third it’s like an adventure as Hannah travels all over the world. Last, it does have some kick butt action to it as well. It’s all a very original and exciting story.
C
2 people found this helpful

This one is fun, because it is set in Europe and written for the European crowd.

I enjoyed the different themes that resonated with our brethren across the Atlantic.

The high point of the movie was the very well developed heroine. Hanna is truly a complex character, and she reacts in a reasonable way as her backstory is revealed to her.

Most of all, she was likable.

While I would not want to do dinner with her, it was fun spending a couple of hours.
21 people found this helpful
See all reviews
Back to top
Get to Know Us
Make Money with Us
Amazon Payment Products
Let Us Help You
EnglishChoose a language for shopping. United StatesChoose a country/region for shopping.
© 1996-2022, Amazon.com, Inc. or its affiliates