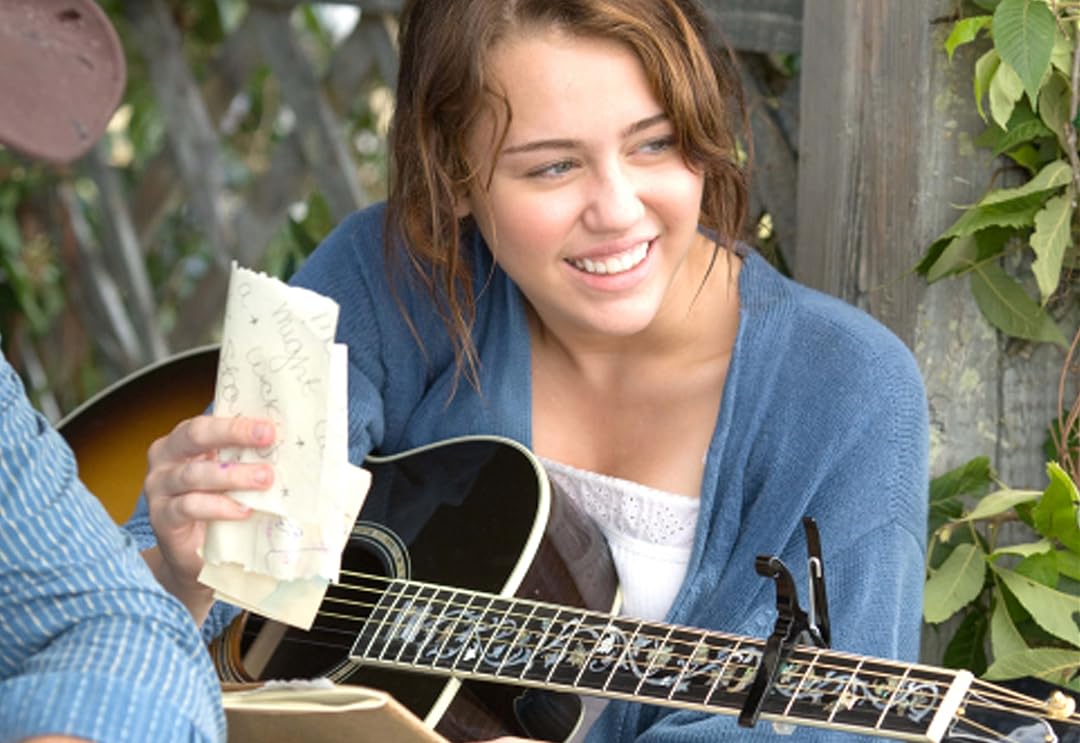 Weatherperson49Reviewed in the United States on February 25, 2020
5.0 out of 5 stars
Great Audio & Video Quality
Verified purchase
What I like about this product that it is a DVD. This particular DVD allows you to watch the movie again without pressing any remote buttons. I also liked the bonus material regarding the introduction of blue ray player and disc.
3 people found this helpful

horsefanReviewed in the United States on January 8, 2020
5.0 out of 5 stars
Good, clean family fun!
Verified purchase
I miss Miley before the crazy moved in! This is just an all around fun family movie with sweet moments, great laughs, and good times! A great moral also- family first and don't forget where you come from. And the music was fun, it had all my kids up dancing! Good, clean family fun!
2 people found this helpful

Jess GonzalezReviewed in the United States on September 6, 2021
5.0 out of 5 stars
Childhood Classic
Verified purchase
If you grew up watching Disney Channel as a kid this is worth having in your movie collection such a great film with classical hit songs! So glad that I finally own this masterpiece of a film came with a blu ray disc, reg disc, and a digital copy that you can actually claim on either vudu or movies anywhere

Kindle CustomerReviewed in the United States on September 13, 2020
1.0 out of 5 stars
I did not orfer this movie
Verified purchase
Someone is pirating my account and I do not know how to stop it. I am a 65 year old man and had no interest in watching this but got charged anyway. Sucks...
One person found this helpful

H. BalaReviewed in the United States on August 26, 2009
4.0 out of 5 stars
"Omigod, it's Hannah Montana!"
Verified purchase
Sweet niblets, to my grown-up shame, it turns out I fall into this movie's target demographic. Saddled with babysitting a horde of pre-teen girls (and, yes, dammit, two hyper eight-year-olds count as a horde) and dragged protesting to the living room as HANNAH MONTANA - THE MOVIE began playing, I ended up liking the thing. So, now, I'm thinking about churning out text messages by the minute and typing out expressions like "gr8" and "bff" and "lol," stuff I used to consider annoying. But, apparently, I'm right into this wheelhouse. I may even give up football.

If you're down with HANNAH MONTANA - and, by you, I of course mean all the young girls under ten and their long-suffering parents - then you already know that the premise revolves around teenager Miley Stewart whose secret alter ego is pop star Hannah Montana. The thrust of the Disney sitcom series has always been Miley's striving to live a normal teenager's life and not allowing all the glitz and glamour of being Hannah go to her head. In HANNAH MONTANA - THE MOVIE, Miley finally gets too full of herself.

Accused of having "gone California," Miley is shanghaied to her Tennessee home by her father, in hopes that Miley will reconnect with what's really important in life. And, honestly, in a one-dimensional film like this, there's only so much breaking down you can do in discussing it. I think it's a safe bet that Miley'll get back to her countrified roots. There is, naturally, a childhood sweetheart grown into a straight talking teen cowboy, and, to me, the dude's got that Josh Harnett thing going on. He initially sees Miley as shallow. You know how that goes.

The question is how do you get Cali-based Hannah Montana into rustic Tennessee. And this is where the evil land developer comes in, and, of course, he plans on constructing a mall at a woodsy habitat called Crowley Meadows. So a fundraiser event is required to save Crowley Meadows. To round off the story, a sleaze tabloid reporter is scurrying around the backwoods, trying to get dirt on Hannah Montana.

The cool thing is, something does happen later on which transcends the film's television sitcom roots. Because up until that point, the story feels sort of old and predictable and I was thinking, "This could just as well be an extended episode of the show or maybe a television special." But I wasn't expecting the twist, and for five seconds I had that feeling that "Wow, they're really switching it up." But then that little girl speaks up and plonks us straight back into self-contained television sitcom reality. But it was good while it lasted.

Fans of Oliver, Jackson, and Lilly may get a wee peeved because they're not so much in the film. Lilly gets the most screen time; Oliver is only there at the start. I thought Billy Ray Cyrus was solid, and old Achy-Breaky even gets a shot at romance. But his best moments are when he's in a scene with his daughter. Guest stars include Vanessa Williams as Hannah's publicist, Tyra Banks as disgruntled shoe shopper Tyra Banks, and Taylor Swift who sings a song.

But it's all about Miley Cyrus. And that's as it should be. She carries the film, and I think enough of her to give this sucker four stars. Miley's performance lifts the film above its trite plot and the cheesy elements. And put me down as someone who prefers it when she sings as Miley rather than as Hannah. Hannah Montana's songs are pop lite stuff and eventually all sound the same to me. But the times when Miley Stewart was singing as herself, those were the songs I relished most: the energetic and catchy "Hoedown"; the sweet and tender duet with her dad, "Butterfly Fly Away"; and the powerful and soulful "The Climb," which I say is the best song Miley Cyrus has ever sung.

HANNAH MONTANA - THE MOVIE offers easy laughs, some good songs, a coming-of-age story, and a girl whose superstar status was something which I, frankly, initially believed to have been founded solely on the strength of the Disney machine. But I had it wrong. Miley Cyrus has real talent. She can act. And, for sure, she can belt out a tune. HANNAH MONTANA - THE MOVIE isn't for everyone, no. But, for those who dig this wholesome kind of shenanigans, this movie knocks it out of the park.

Eric Flapjack AshleyReviewed in the United States on June 28, 2014
4.0 out of 5 stars
Solid but not Cannon
Verified purchase
I was surprised at the level and serious tone of the movie in the second half, which is a good thing because the first half plays just like the show but without the laugh track. Odd sidenote in the Hannah Montana franchise because the final season of the show (Hannah Montana Forever) seems to ignore the events of this film, particularly the ending.

The Blu-ray transfer is top shelf material, with a surprisingly good director's commentary track. There is also a fun featurette with Jason Earles and more music videos than you can shake a stick at.
One person found this helpful

SkyReviewed in the United States on October 12, 2009
3.0 out of 5 stars
Found Her Way Back to Tennessee
Verified purchase
First let me say that the enjoyment that my 6 year old daughter got out of The Hannah Montana Movie was 5 stars. Since getting The Movie on DVD last week she's probably watched it a dozen times. It's a feel-good movie that preaches the importance of family and friends over material stuff in a material word.

If you've seen the Disney Channel series [[ASIN:B001EOQWNK Hannah Montana]], you kinda know what you're getting with this movie. Basically a lot of silliness about a pop star who no one seems to recognize if she takes off her blonde wig. Blonde she's Hannah; a little darker without the wig and she's Miley. The wig even fools people really close to her! Amazing.

While full of inconsistencies, recycled gags, cliché themes and common movie morale lessons, The Hannah Montana Movie is a pleasing, warm story that young children will enjoy...especially for those already fans of the TV series. The acting is fair at best and even a little tough to watch at times, but no one involved ever really set out to make an Oscar Award winning blockbuster here, right?

It was just really nice to cuddle up with my daughter (again and again...and again), appreciate the joy the movie was bringing her and listen to her sing along to the songs. Heck, I caught myself singing along with [[ASIN:B0022V1ZCM Back to Tennesse]], Miley's Dad's song in the movie.

So if you have a little girl that's a fan of Miley Cyrus or the Disney series she stars in, The Hannah Montana movie will be enjoyed thoroughly. As for me, well...while not the best movie I've seen this year, I'm happy to sit through it with my little girl as many times going forward as she asks me to...and I hope it's a lot of times!
5 people found this helpful

The Smurf FamilyReviewed in the United States on June 8, 2013
3.0 out of 5 stars
Hannah Montana: The Movie
Verified purchase
This movie...Hannah Montana: The Movie is okay. I much more enjoyed watching Miley Cyrus in her TV series " Hannah Montanh" than in this movie. I think there was better acting to be seen by her with her TV series. Just my opinion of course. However, I was very pleased with the condition that my order arrived and the time that it took to ship it to me.
Hannah Montana, The Movie: 3 stars.
Product Condition & Shipment Time: 5 stars!
Customer Service: 5 stars!
2 people found this helpful
See all reviews
Back to top
Get to Know Us
Make Money with Us
Amazon Payment Products
Let Us Help You
EnglishChoose a language for shopping. United StatesChoose a country/region for shopping.
© 1996-2021, Amazon.com, Inc. or its affiliates