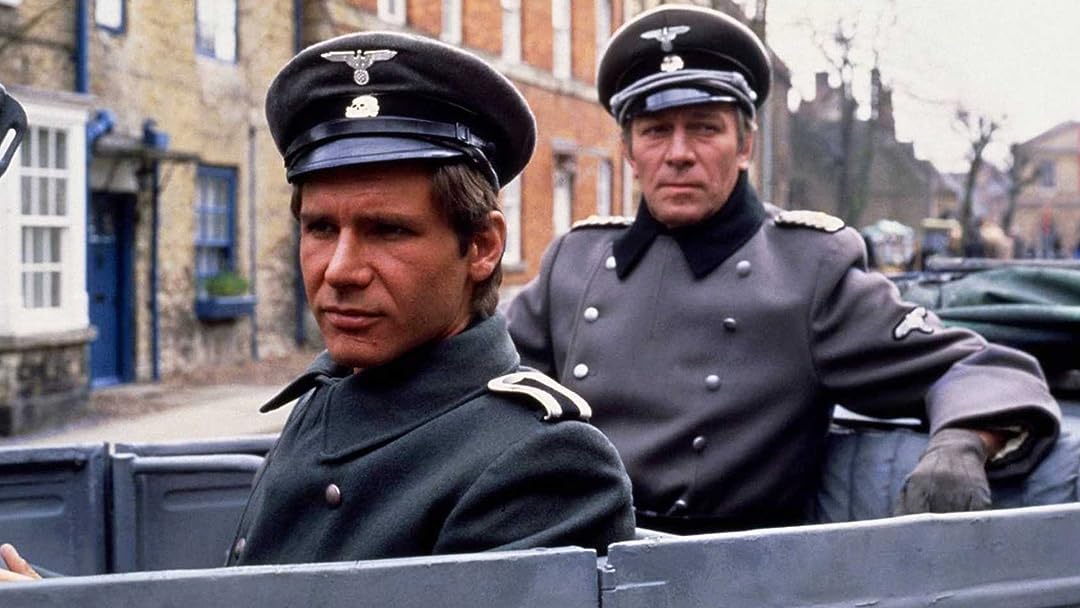 (547)
1 h 48 min1979X-RayPG
In this WWII romance, David Halloran (Harrison Ford) is an American bomber pilot stationed in London. During an air raid, Halloran meets and falls in love with beautiful Briton Margaret Sellinger (Lesley-Anne Down) even though Margaret is married.

Don Diego VegaReviewed in the United States on May 28, 2020
3.0 out of 5 stars
Don’t bother
Verified purchase
This is one long drawn dreary movie. Nothing in it could possibly ever happen in reality.
Harrison Ford gives his usual performance: he has two ways that he acts, either he speaks in a quiet monotone, or he sort of speaks up as if he’s getting after someone. That’s it other than that he just has a blank stare on his face. Emotionless! That sums up Harrison Ford‘s entire acting career. And it’s no different here.
Hey, he is madly in love? But no emotion! No passion! How did he become a film actor?
Christopher Plummer looks great does a superb job. It’s amazing how young he looked at this point. This guy took really good care of himself. It’s too bad he didn’t get a better script.
Ms. Down looks very nice. She acts with passion. She shows many appropriate emotions.
The film begins with our two stars interacting. There’s no character development. There is no reason for us to care about these people. It’s the same with their falling in love. There’s very little interaction. They just fall in love. We have to except that. There aren’t any reasons. What I’m trying to say is, this is not a well written script.
I would suggest that you pass over this film and find a true love story to watch. This is it really a love story, it’s not an adventure, I don’t think they knew what kind of film they were making. But I’ll tell you one thing this Story could never have happened.
Somebody spent $8 million to make this turkey. It only made $3 million. In Hollywood that’s what they call, or flop.
The DVD is professional. Very Good image and audio. Although all of the emotional orchestration tends to be twice as loud as the dialogue. At times they just turn it up very loud. That’s probably due to the fact that the story is dragging along so much.
I guess you can tell I really don’t like this movie Huh?

Frank A.Reviewed in the United States on April 13, 2021
5.0 out of 5 stars
History Repeats Itself
Verified purchase
Hanover Street was the parallel story of my father in WW II, right up to the end. He was an American crew member of a B-26 bomber, stationed in northern England. He met a girl whose husband was fighting th Nazis in Europe. What my father did now know—nor did my late mother or any of our family—is that the girl gave birth to a baby boy in 1945. Jumping ahead to December 2019, I had been researching my ancestors. And so was my unknown half brother. Our searches brought us together. He has lived in northern England all his life and was in the RAF for 30 years, including a stint in the Queen's Flight. He and his wife planned to visit us in the summer of 2020, but cancelled due to Covid. My family is now looking forward to their visit at our California ranch in this coming July, pending the pandemic, of course.
13 people found this helpful

seaheatherReviewed in the United States on June 4, 2020
3.0 out of 5 stars
Harlequin Romance With Nazis
Verified purchase
The opening scene which sets up the romance between a married English beauty and an American pilot during WWII doesn't quite work. We are supposed to believe that over a cup of tea these total strangers become so enthralled with one another that they will begin an adulterous affair. We are also supposed to assume that the danger of the war -- Hanover Street is in London and this takes place during the Blitz -- somehow justifies this aberrant behavior. What fails is that there is so little connection, either conversationally or otherwise between them -- to get us involved with their supposed infatuation. Harrison has little to say other than conveying that he is smitten with Leslie-Ann's eyes. She seems mostly taken by how taken Ford is taken with her -- though when we see her in her cushy London flat with her hubby [Plummer] and precocious child we wonder why she is in need of flattery on this level. There is certainly no evidence of marital neglect. That said, there is plenty of action once the war scenes take over, and the bromance between Plummer and Ford during this section has more genuine feeling in it than all the bedroom scenes between Ford and Down. Not a total waste of time but oddly vacuous considering the talent on hand.
10 people found this helpful

Mark D. BurghReviewed in the United States on June 2, 2020
2.0 out of 5 stars
Waste of Time
Verified purchase
Peter Hyams produced many different films of little worth. Probably the least original writer and director in the post-studio world. This film, Hanover Street is the product of what I must call an adolescent mind. How cool! Airplanes! Girls! Leather jackets! Okay, the premise of a doomed love affair between an American pilot and a British Waaf is not the problem, besides being outdated by thirty years at the time this film appeared, but the details of air combat as so bad, so wrong, that I could not stand it. USAAF pilots would not go to town in flying gear, but in their class A uniforms, a minor but so terrible miss. Also, the Norden bomb sight used the bombardier took control of the air craft over the target, so the terrible banter would not happen. These airplanes were so loud that these sorts of conversations were impossible. Also, it was so cold up there, hence the leather and fur. Better that Hyams did not show the bombing sequences and stuck to the romance. I won't even mention the ludicrous spy plot. Why would a B-25 pilot be sent on a spy mission?
9 people found this helpful

Gilbert SantiagoReviewed in the United States on August 18, 2020
5.0 out of 5 stars
FANTASTIC MOVIE !!!!!
Verified purchase
FANTASTIC MOVIE !!!, I saw this Movie in the Theater when it was Released, and It's just as Wonderful seeing it again, the Directing, Script, Cinematography, and Acting are all top notch 👍...It's Obvious to me that those who chose to leave Negative reviews are abusing the privilege of leaving a "Truthful Review", and as such should be IGNORED....if you are into seeing Romance,suspense, action, and intrigue..with a Soundtrack that moves your Romantic soul..in the Grand Hollywood way...than this is your movie..Especially for a Date night 😉...I bought it on DVD, because I intend to enjoy..repeated viewings..Yes, it is a Great movie to watch...👍...update..I also enjoyed, Re-watching "Hanover Street" with the Director's, (who also wrote the screenplay for "Hanover Street") Commentary..where he explains Everything about what took place behind the scenes during the making of the film and more..which was Great to discover..
😳😎👍🎬🎥
3 people found this helpful

VibrationalWorldReviewed in the United States on July 4, 2020
3.0 out of 5 stars
Not Worth My Time
Verified purchase
It is too slow, they spend too much time in bed, the dialogue is really cheesy and awkward. Come on; how many times did he ask her for her name and how many times did she ignore his question? I am surprised that Harrison Ford would even do a film like this, it doesn't fit his character. Leslie-Ann Down, it says she was voted one the most "Britains most beautiful teen ager", on a scale of 1 to 10 I'd say she about 5. It's interesting how some women in this world are beautiful but not sexy, and some women are ugly but yet really sexy, and some women are the balance of both are somewhat beautiful and sexy. Unfortunately, Ms. Down is just not sexy or romantic in this movie. If the director cast someone else with more sex appeal I still feel that this movie would be a waste of my time. In addition, the chemistry between Ford and Down is non existent.
2 people found this helpful

Cate WrenReviewed in the United States on October 19, 2021
4.0 out of 5 stars
Cheesy, corny, and as comforting as a cup of tea
Verified purchase
When I was nine years old, I forced my mother to take me to see this in the theatre. She was baffled by my interest and kept trying to talk me out of it. We went. When the opening credits came up and she saw Harrison Ford's name, she let out a very loud, "Oh! Now I get it!" I loved the film and cried all the way home, inconsolable. My mom still tells the story of her nine year old arguing in tears. Mom: "he did the right thing." Me: "he'll be aaaall aaalooone! " (As if!)
Many decades later, no longer believing in "love at first sight," the romance doesn't hold up. The parts with Christopher Plummer and Harrison Ford behind enemy lines do. If you can channel your inner pre-teen, and adore young Harrison Ford, this is a lovely film; if you can't or don't, the romance may be a bit of an eye-roller. Either way, this film still has a place in my heart.
One person found this helpful

Grannie AnnieReviewed in the United States on August 31, 2016
2.0 out of 5 stars
Hanover Street.
Verified purchase
Not a good movie. The redeeming factors are the flying scenes and the acting of Christopher Plummer and Richard Masur. The motorcycle chase scenes. Facts: Harrison Fords hair was too long for a bomber pilot of that era. No bomber pilot having leave in London would have access to a jeep. Chatting over the intercom when they were on a secret mission would not have happened nor would running around the planes on the airfield with dates. I know what I speak of as I grew up in England during WW11.
16 people found this helpful
See all reviews
Back to top
Get to Know Us
Make Money with Us
Amazon Payment Products
Let Us Help You
EnglishChoose a language for shopping. United StatesChoose a country/region for shopping.
© 1996-2021, Amazon.com, Inc. or its affiliates