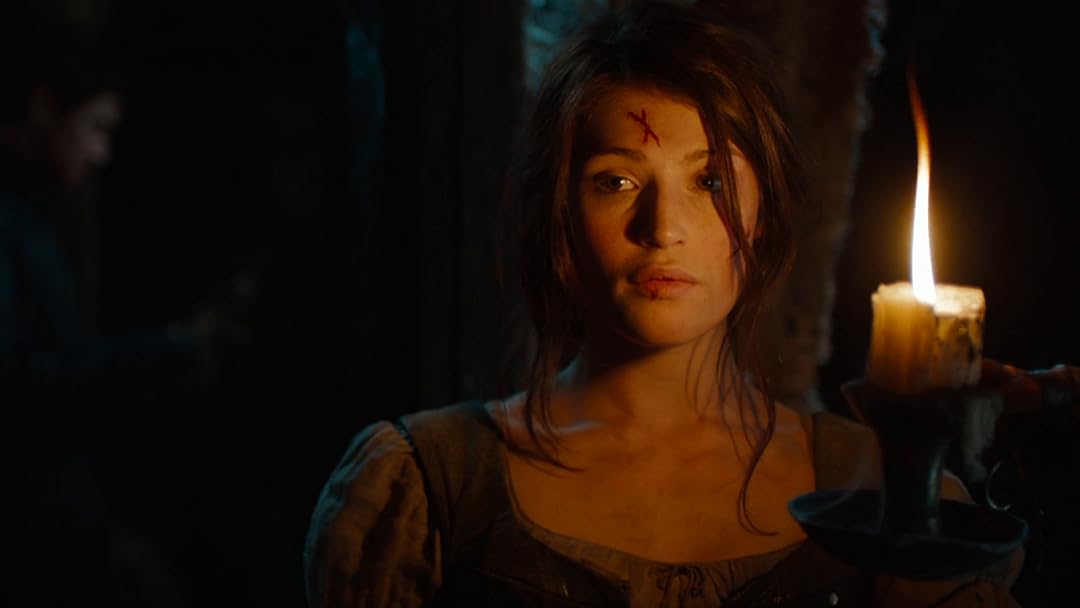 ElsinoreReviewed in the United States on June 21, 2018
5.0 out of 5 stars
3D review: Best 3D film ever! Amazing!
Verified purchase
Paper cutouts and flames opening sequence is some of the most beautiful 3D I've ever seen (and I've seen hundreds of 3D films). EVERYTHING in this 3D blu ray is blocked for depth and popouts. Even the closing credits had me transfixed to the screen (LG OLED65E6P). Really fun, crazy story that reminded me of the tone of "Abraham Lincoln, Vampire Hunter." It never takes itself seriously, which can backfire, but not here. Was laughing and flinching at things flying toward me through the whole movie. Gory, adult "fairy tale" with SO MUCH 3D! Can't understand why TV makers have abandoned 3D now that LG's polarized OLED 4k TVs have perfected the experience. Show this movie to friends and they'll be trolling Amazon for one of their own. If you're lucky enough to have a good 3D TV, GET THIS MOVIE!
23 people found this helpful

joel wingReviewed in the United States on July 20, 2021
3.0 out of 5 stars
Turn Hansel and Gretel into action heroes? Why not
Verified purchase
Turn the famed Brothers Grimm characters of Hansel and Gretel into action heroes? Well worse things have been done. It’s actually not bad. The witches look good with distorted faces. There’s some blood and guts thrown in with exploding characters. The action is entertaining. There are some light hearted moments. There’s the anachronism like a gatling gun in one scene but it’s a small price to pay. It’s some mindless fun and I’d watch it again.
6 people found this helpful

ScottReviewed in the United States on September 14, 2021
4.0 out of 5 stars
Good not great.
Verified purchase
I very much like Renner and Arterton, most all the cast. I don't much care for critiques of writing or acting, sometimes things just come together with characters and a show that's fun to watch - and this is it.

The action sequences with the witches are over-the-top, a bit eye-rolling at times, but fun. The make-up and costumes for the witches are great, mostly because they're varied which makes it interesting. Famke Janssen does evil really well.

I'm not particularly sensitive about swearing, but there was some of it here that seemed unnecessary. Words lose their punch when used too loosely.

Maybe not an all-time favorite, but I've watched a couple times already, and will watch again.

Kurt C. PiepenburgReviewed in the United States on October 20, 2021
2.0 out of 5 stars
Good looking movie, but with idiotic dialogue.
Verified purchase
Almost shut this down. Liked the color in the film, but not the epileptic fit-inducing rapidfire movement in the nonsensical digital FX kill scenes. Sure, it was made with 3D in mind, but there was no subtlety at all, thereby negating the 3D effect. How is it that the older townspeople spoke English with (bad) German accents, but Hansel & Gretel spoke modern-day American English? And, that poor, dying White Witch sez: "Kill the f$&@ing b@#ch.". How utterly classy of her. Those four words ruined her character, completely, and she was the only truly interesting character in the whole of the movie. Perhaps the Brothers Grimm might've liked the look of the witch's digital gingerbread and candy cottage, but I'll bet you they'd've vomited at the sight of any of the rest of this ridiculous take on one of their best-ever stories.
One person found this helpful

Leonore ProhaskaReviewed in the United States on October 22, 2021
2.0 out of 5 stars
Review of the product (not the movie): "4K UHD + Blu-ray"
Verified purchase
Movie reviews belong @ IMDB, Rotten Tomatoes, etc. Reviews on a retailer's website SHOULD be for the product as applicable: the stream quality, discs, content, and packaging. This is a review of ASIN B0974YYBM9: "Hansel and Gretel: Witch Hunters, 4K UHD + Blu-ray"

The 4K UHD disc includes only the 88 min. theatrical version of the movie (minus one star). However, the included 2K HD blu-ray does include the 97+ min. "Unrated Cut"; in fact, it appears to have the same content as the 2K/2D BD packaged in previous releases, with the same three extras/special features:
"Reinventing Hansel and Gretel" featurette (15:41)
"The Witching Hours" featurette (9:01)
"Meet Edward the Troll" featurette (5:25)

Both the 2K BD and 4K UHD movies seem to use the same TrueHD audio track. Reportedly, the UHD video is merely upscaled from 2K vs. a 4K master (minus another star), so there is only a moderate difference between the two. Between the two versions included here, I prefer the longer Unrated Cut version, even though it is only in 2K HD. I do not own the 3D version, but I suspect 3D remains the superior way to watch this movie.

A Theatrical Trailer is missing (still).
One person found this helpful

G. Lyle SnodgrassReviewed in the United States on October 28, 2016
5.0 out of 5 stars
Stylistically compelling with visually stunning ...
Verified purchase
Stylistically compelling with visually stunning costume, props, scenery, sets, and players, this film is a joy to behold. Bored of witches? You won’t be. Fast zombies transformed the genre.. forever. Likewise, these witches change the way witch stories are told. The rhythm spacing the film’s action sequences and character development is right. The space between action scenes gracefully exposes character development for characters I actually cared about. Uncharacteristically sophisticated dialog is punctuated by expertly timed and delivered, memorable one-liners. Sadly, post production did not nail the timeline for the final battle. Mina was unashamedly idle for what seemed like many minutes of story time and was surprisingly unthreatened, unhindered, unfatigued, and unscathed for a machine gunner. Ben might have been able to hit Muriel as she escaped the final battle, if she had unwittingly both announced her passage and crossed directly into his field of fire. I might have had her dealing with a nasty, severed and exposed knee injury – just to slow her down enough to make the story fit Ben knocking her out of flight. As a benefit, the Boss battle could be much more gruesome, and tragic. The change from overconfidence to loss of hope and impending death fought off with only last ditch anger at having lost is a very tragic and unnerving thing to behold. It was over too quickly. Would Hansel and Gretel have experienced gut wrenching, conflicted empathy for something loathsome but still human? What possible childhood trials could have contributed to so cold and numb a pathos for witches? Why are they compelled to end the voice that could reveal meaning or insight to their own murky, tortured past? I will watch it again. I will recommend this film to others, but not for kids. I will advocate playing this film to monitors around the house during Halloween parties as a conversation kicker.
11 people found this helpful

The DagdaReviewed in the United States on July 27, 2017
4.0 out of 5 stars
Big Fun -- Spoiler Free Review
Verified purchase
A fun movie (not a great movie) with good special effects, great make-up, good cinematography, outstanding sound, decent performances and some humor too. For info to help you decide to watch or not, and/or let the kids watch: There is some nudity (one scene), adult situations, some intensity,violence and gore (not excessively gratuitous throughout, note the word throughout). Not for my kid when he was young, and not for those that are uncomfortable with the aforementioned qualities. the premise is clever, but not fully realized by the writing (my opinion). But for me good enough to enjoy periodically. If Famke was more prominent (especially without the makeup - which is great but not flattering) I'd watch it even more often.

The quality of the Blu-ray is excellent - showcasing all the good qualities of sound and picture the movie has to offer. This one has some pretty good demo material for showing off your home theatre.
2 people found this helpful

Mike DReviewed in the United States on January 15, 2014
3.0 out of 5 stars
If you liked 'Van Helsing' you will probably enjoy this too.
Verified purchase
Mini-Review: Last night we watched 'Hansel & Gretel: Witch Hunters'. It this time it's available free to Amazon Prime members. I found it to be a fun movie for the most part. It reminded me very much of the '2004' film 'Van Helsing'. If you liked that, you might like this also. They had the same sort of fantastic weapons as Van Helsing did, seemingly impossible for the time periods depicted. There were more witches in this movie than you can shake a broomstick at . Most were appropriately scary or weird looking. The acting was good and there was plenty of action. There was some gore, not too excessive, enough to earn its R-rating I suppose. Occasionally the language seemed a bit out of place, just like the weapons were, for the time. For instance when under-stress our two heroes liked to use the F word. No big deal, just that it somehow seemed out of place, and too contemporary for the surrounding mood. The ending left the door open for a sequel or two if it was a success at the box-office. I did like the friendship that developed between Gretel and an unlikely character in the story. There was also a love story with Hansel. Both side stories added some "charm". I don't want to say more and reveal too much. I'd give this one a 2 /12 or 3 out of 5 stars.
10 people found this helpful
See all reviews
Back to top
Get to Know Us
Make Money with Us
Amazon Payment Products
Let Us Help You
EnglishChoose a language for shopping. United StatesChoose a country/region for shopping.
© 1996-2022, Amazon.com, Inc. or its affiliates