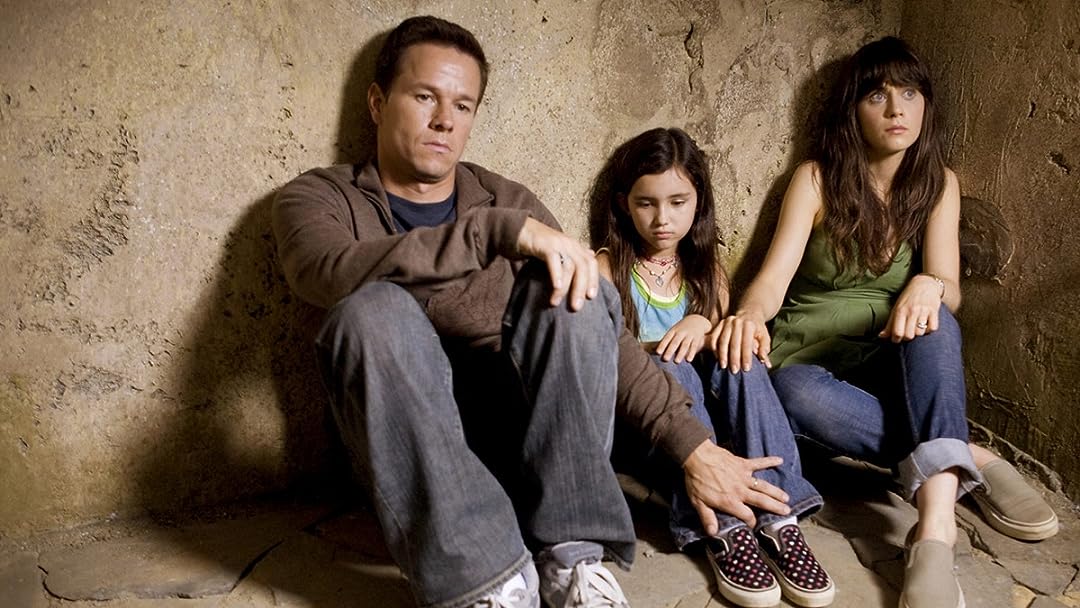 (5,110)
5.01 h 30 min2008X-RayR
HD. Survivors run from a mysterious force that is causing mass suicides all over the U.S. in this harrowing M. Night Shyamalan thriller.

HelgaReviewed in the United States on August 21, 2017
1.0 out of 5 stars
Find anything else to do with your time. Seriously, anything.
Verified purchase
Curiosity got the better of me and I watched this. Don't make my mistake, you are not that bored.
Terrible acting, bad directing, bad editing, cheap looking, dull script - these are the highlights.
Bad if not completely strange acting by Zooey Deschanel, who seems to be in a different movie than the rest of the cast. I think she was told that this was an upbeat horror comedy. Wahlberg in just made of wood - and not the good polished wood you would like for a coffee table, no, I mean the particle board you get for a shoe shelf that is going into the closet. Luckily, the chemistry between Deschanel and Wahlberg saves the day - I'm just kidding, there is nothing there. As I used the remote more and more to speed through to the end of the film I was rooting for "the happening" to happen to all of them.

I know, I know - M Night Shyamalan. I should know better by now.

Grant PearsonReviewed in the United States on June 13, 2018
3.0 out of 5 stars
You Want A Terrible Movie?
Verified purchase
Oh man. How do I rate this? I bought it because I knew it was bad. It is for a bad movie marathon. Specifically end of the world type of movies. Basically it's Mark Wahlberg day. Also Gerard Butler. Those guys need to do a movie together. The plot could be that the only way to save earth is to blow up the moon. I'm already excited to watch it. I'll be the opening day with a Monster in one hand ands some beef jerky in the other.

Oh no. They get to the moon and discover that Jason Statham has been living there, and they're blowing up the moon over his dead body.

Paul Giamatti is back at NASA pissed off because nobody listened to him when he said Statham could still be alive up there.

And off in the corner Stanley Tucci is getting ready to set off the space nukes, killing the whole team. Why didn't they just use the space nukes to begin with? CHUG SOME MONSTER, GNAW ON SOME JERKY AND STOP ASKING QUESTIONS! All Gerard Butler wants to do is save the world for his adorable little girl and vaguely-famous-but-not-enough-to-be-paid-the-same romantic interest.

Where's my bag of money?

Steven ShareReviewed in the United States on March 22, 2019
2.0 out of 5 stars
Another M. Night Smalamadingdong Disaster
Verified purchase
Basically, this is a story about how love can conquer all, even an unseen, diabolical plant demon. I went into this movie with an open mind, however, the acting was so incredibly bad that it was hard to take it seriously. I don't know if Mark Wahlberg has done too many comedies, but it didn't seem like he was taking this movie seriously. The chemistry between him and Zooey Deschanel was lackluster. The only reason I finished the movie is because I'm not a quitter. This was a tough one...
60 people found this helpful

joel wingReviewed in the United States on April 19, 2020
1.0 out of 5 stars
So bad makes you question M Night Shyamalan's writing abilities
Verified purchase
Everyone in New York City’s Central Park suddenly freezes and then when they come out of their temporary paralysis they start trying to kill each themselves. A few blocks away at a construction site workers begin jumping off the top of a building to their deaths. That’s the shocking opening of The Happening. The movie was written, directed and co-produced by M. Night Shyamalan. He’d had a series of hits like The Sixth Sense, but with this movie his big twist which was what he was known for was a complete dud.

The Happening is set up as a thriller. The events in New York City begin spreading across the East Coast of the United States. Philadelphia science teacher Mr. Moore (Mark Wahlberg), his wife Alma (Zooey Deschanel), his friend Julian (John Leguizamo) and his daughter Ashlyn (Jess) jump on a train to get out of the city, but then get stuck in a small town. They hope they can get away from whatever is happening, but there is no escape. When it’s finally revealed at the end it turned out to be really dumb. Even before that happens Shyamalan starts throwing in ridiculous scenes hinting that this movie is not going to end well. Plus there are multiple holes in the plot.

The story was supposed to play upon the fears of terrorism. People suddenly start dying and everyone blames terrorists. Then the twist turns out to be something completely different and is supposed to be a warning to the public, but it’s so bad no one probably listened. It also made you question Shyamalan’s talent. Was he really such a good writer or was he just thinking up these surprise endings because that was what he became known for so he had to have one in everything he created?
C
27 people found this helpful

JoshReviewed in the United States on November 20, 2020
1.0 out of 5 stars
Arguably, ARGUABLY, M. Night Shyamamalama's worst film
Verified purchase
I'm going to save you some time, okay? Shyamamaju's movies tend to have some kind of "twist". This awful film's twist is that all the plants on earth suddenly evolved lethal spore-based neurotoxins that specifically target humans and make them kill themselves with whatever they can get their hands on. Now that you've read that, doesn't that sounds STUPID? I mean isn't that an incredibly dumb idea for a movie? It is. It really is. And yet, some nimrod executive at 20th Century Fox decided that not only was it a GOOD idea, but it was an idea worth investing 48 million dollars into.

It was almost universally panned, AND YET was a box-office success, which should be indicative to you of the average level of intelligence of the common movie-going populace. Now, if you just read that sentence, and you understood what the words "indicative" and "populace" meant without having to look them up, congratulations! You will also find this move to be utterly terrible.

It's poorly acted, has very little shock value, low production values, and is just a generally unambitious, boring, nonsensical affair. Watch literally anything else, EXCEPT Shyamumalan's other "worst film", Lady in the Water. Don't even get me started on THAT god-awful thing.
13 people found this helpful

Crazy SvenReviewed in the United States on April 4, 2019
3.0 out of 5 stars
Day of the Triffids Reinvented
Verified purchase
THE HAPPENING by director M. Night Shyamalan; starring Mark Wahlberg, Zooey Deschanel and John Leguizamo was one of M. Night's less popular flicks and it is understandable. I first saw this when it came out and the early scene of construction workers falling made me wince, because it was too soon after 9-11 to see a repeat-performance of that horror. Maybe that was the point. Maybe that was the hook to pull us in, but it just felt wrong at the time. The film has many plot-holes and unlikely events, but the awkwardness of the characters was what really bothered me.

John Leguizamo is an actor that looks great in police dramas, but as a concerned parent, his acting was not believeable and bordered on the bizarre. For some reason, I found him to be very irritating in this role. Mark Wahlberg was much of the same. He just seemed sedated and uncomfortable as the lead protagonist and his lists of weird science facts felt more like M. Night was using this film as a dumping ground for a long list of random science trivia. Zooey Deschanel is about what you would expect. Those bright eyes of hers are the main attraction and her dialog was forgettable.

The message of the film is clear, but the whole hot mess would read better as a short film or short story. We get the point. Humans are ruining the planet. The premise is intersting, but watching it now for a second time was not worth it. It just seemed long and odd. Most people will not like this film, but a few will. The only way to find out is to watch it and see for yourself.
24 people found this helpful

Nicholas J.Reviewed in the United States on May 14, 2021
1.0 out of 5 stars
Absolute Garbage
Verified purchase
*SPOILERS TO FOLLOW* An absolutely hackneyed heap of trash. The acting from all of the actors is unfathomably bad, especially from the leads in Wahlberg and Deschanel who have been 50,000 better in literally anything else. Every scene feels so forced and flat, as if none of the performers have an ounce of faith in the film or in its painfully bad script. Shyamalan should personally apologize to the paper and ink that were wasted by his absolutely inane babble. The characters have zero character arcs and we spend no time investing in them at all, so the emotional moments fall completely flat on their face. But most insulting is the film's titular "happening" which arbitrarily starts and then arbitrarily stops for ABSOLUTELY NO REASON and rather than give the audience one, Shyamalan follows it up with a scene of a guy on TV going whelp, I guess we'll never understand it. What an absolute disgrace. If the plants truly revolt and decide to start attacking mankind it'll be because Shyamalan killed defenseless trees and literally let his pen vomit all over the paper again and again and again when he birthed this absolute monstrosity onto the cinemagoing public.
7 people found this helpful

Zoo LadyReviewed in the United States on January 10, 2019
5.0 out of 5 stars
There is an important message to be gleaned.
Verified purchase
Love anything M. Night Shyamalan. Just like Alfred Hitchcock it is great fun to spot where the director appears in his movies.
What sets this movie apart from his other works is his message of conservation and climate change.
We would do well to heed his message.
30 people found this helpful
See all reviews
Back to top
Get to Know Us
Make Money with Us
Amazon Payment Products
Let Us Help You
EnglishChoose a language for shopping. United StatesChoose a country/region for shopping.
© 1996-2022, Amazon.com, Inc. or its affiliates