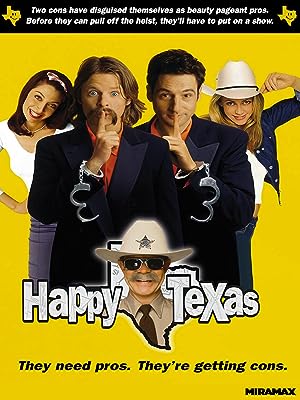 Leaves SHOWTIME in 12 daysRentals include 30 days to start watching this video and 48 hours to finish once started.

J. HuffReviewed in the United States on January 14, 2018
5.0 out of 5 stars
Just SEE this, its funny!
Verified purchase
Funny, mistaken identity comedy about escaped convicts posing as gay beauty pageant professionals in a small Texas town. The performances of Jeremy Northam, Steve Zahn and William H Macy are worth the price of this movie alone, but add in a cast of real characters like Mo Gaffney, Paul Dooley and Illeana Douglas and you have a real winner. Ally Walker as banker 'Jo' the love interest, is a ray of pure summer sunshine, she lights up the screen with her performance. M.C. Gainey is the 'Bad' convict who wants to take over the guy's 'Bank Burglary' (YES, Burglary, - It's Robbery when a weapon and people are involved) Other characters include cameos by the producers Mark Illsley and Ed Stone, Ron Perlman as a gay state trooper, Scarlett Pomers in an early performance as one of the pageant girls, David Shackleford as 'Varnel', Tim Bagley and Michael Hitchcock as 'David' and 'Steven' the pageant pros who see the loss of their mobile home / workshop as the chance of a lifetime to scam the insurance company and Tim Cowgill as the tantalizing cowboy seen in many shots but never given some decent screen time 'sigh', never did tight jeans, cowboy boots and a hat look so hot!!
3 people found this helpful

ForeverYOUNGReviewed in the United States on September 11, 2019
5.0 out of 5 stars
Happy Texas
Verified purchase
When my husband I first watched this movie, we both laughed through the whole movie. It is a riot. About a couple of prison escapees that are mistaken for a couple of gay little girl pageant wranglers. If that isn't funny enough, the rest of what happens as they try to "sell it" is. I laugh every time. Of course movie reviews are risky - everyone like something different. There's some language... themes (gay and some regular sex discussion) ... but honestly it's mostly language - I would let my 13 year old watch it.
One person found this helpful

A. J. RuttenReviewed in the United States on November 26, 2000
5.0 out of 5 stars
Fun-Filled, Heart-Warming Laugh Fest....
Verified purchase
I'm always amazed when I read reviews of films - ESPECIALLY COMEDY - how irrate and seemingly angry people are that don't like the film!! Humor is so incredibly PERSONAL!! How can one possibly PURCHASE a film based entirely on someone else's opinion? It's beyond me! We are all "critics" - merely giving our "opinions" - and 99% of us do not get paid for this act!! Anyway, since very, very few comedies make me throw my head back and laugh from my "gut," I was so surprised and pleased when this little "feel-good" gem did just that! Steve Zahn's performance is the "glue" that holds this film together! He is zany, sweet, silly, and "eats up the scenery" in a somewhat understated way - if that's possible!! I was surprised to see the accomplished actor Jeremy Northam ("Emma," "An Ideal Husband") in this small, underrated bit of confection! But he is the perfect foil for Zahn's craziness! As has been previously mentioned, Bill Macy is his usual excellent self! And Illeana Douglas is marvelous (as always)as the frustrated kiddie beauty pageant director and the object of Zahn's repressed affections! The scene when these two FINALLY "connect" is a stitch, and bears comedic resemblence to the steamy love scene in "The Postmas Always Rings Twice" - but without the flour!! So fellow movie lovers, don't BUY this because I loved it!! Rent it or watch it on cable, and make up your own minds!! But if the scene where Steve Zahn attempts to teach the tiny would-be beauty queens to dance doesn't at least bring a smile to your face, I suggest you hold a mirror under your nose to check if you're still breathing!! (That's sarcasm, folks, and intended for humor purposes only!) Enjoy!!
One person found this helpful

avid reader/shopperReviewed in the United States on November 4, 2013
5.0 out of 5 stars
Best kept secret in years!! Don't miss this one!!!
Verified purchase
GREAT entertainment. Unique twist on 'jail break' twist of fate! This movie is soooo entertaining and casting is simply perfect. Steven Zahn gives a prime comedic performance. William H. Macy's role as sheriff and the decisions he makes while trying to 'break the case' "Unique". Macy is at his quirky best. Jeremy Northam's role and scene stealing prowess is priceless. This movie is up there with Cohn Brothers satire and back water Texas folks are at their best.

I will watch this movie again and again--just to laugh and enjoy these performances.... YEA for "Independent Films"!!

Supporting rolls include great looking females. However, the children 'steal the show' and turn the movie into a 'softee'!

Allen SmallingReviewed in the United States on October 20, 2017
4.0 out of 5 stars
Surprisingly effective social comedy / farce
Verified purchase
Delightful mistaken-identity romp from 1999 set in small-town Texas has Steve Zahn and Jeremy Northam as escaped convicts, assumed to be the gay couple in charge of coaching the local "Little Miss" pageant. Things being what they are, they take the gig with no experience at all. Comic and romantic complications ensue. With Ileana Douglas, Ally Walker, M.C. Gainey and Ron Perlman, but it's William H. Macy who darn near steals the show as "Chappy" the forlorn Sheriff. Worth multiple viewings.
One person found this helpful

ezaginReviewed in the United States on March 13, 2022
5.0 out of 5 stars
Best Happy movie ever!
Verified purchase
Best and most enjoyable movie I have seen in years. Not a movie person, but I loved it! Joyful pleasure and comedy!

HapbarbReviewed in the United States on February 8, 2009
5.0 out of 5 stars
Steve Zahn - modern comedic hero!
Verified purchase
I have no idea why this DVD is no longer beiong manufactured! Just last weekend, I watched it again on a cable network, and was blown away for the 4th or 5th time by Steve Zahn's performance. Jeremy Northam & William H. Macy are terrific, as well, although this should have been a star turn for Zahn. Want a completely "Happy" day? Watch this & "That Thing You Do" back-to-back; while both movies are extremely clever, for me, Zahn's characterizations linger most in the memory. Right now, I'm going to peruse local used stores to try and find a copy of "Happy, Texas!"
One person found this helpful

ZukeReviewed in the United States on May 7, 2022
1.0 out of 5 stars
It won't play on my dvd player.
Verified purchase
Won't play on my dvd player.
See all reviews
Back to top
Get to Know Us
Make Money with Us
Amazon Payment Products
Let Us Help You
EnglishChoose a language for shopping. United StatesChoose a country/region for shopping.
© 1996-2022, Amazon.com, Inc. or its affiliates