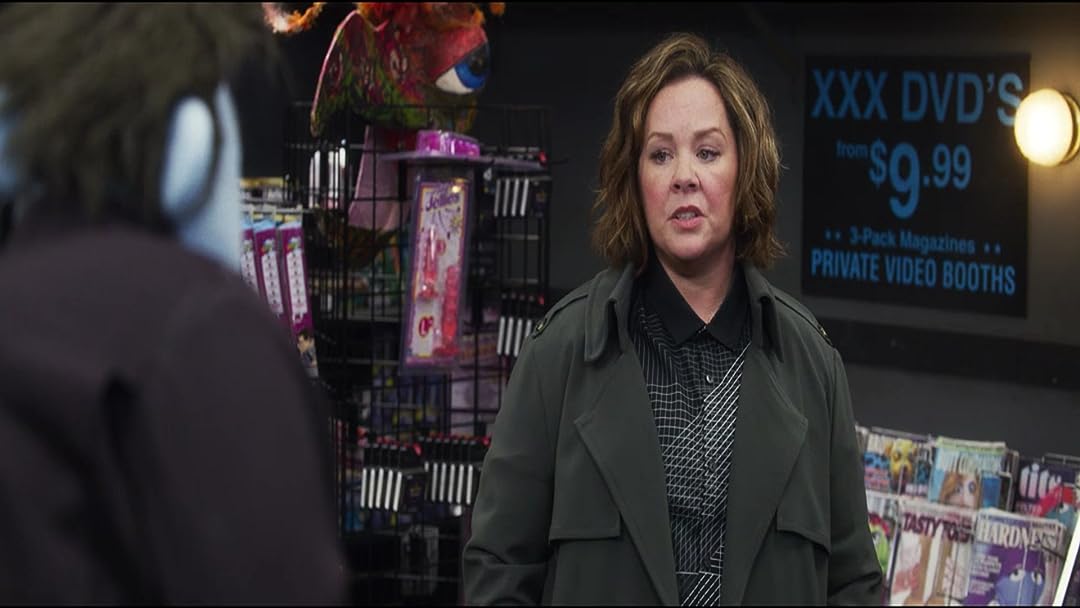 (7,800)
5.41 h 30 min2018X-RayUHDR
THE HAPPYTIME MURDERS is set in the underbelly of Los Angeles where puppets and humans coexist. Two clashing detectives, one human and one puppet, are forced to work together to try and solve who is brutally murdering the former cast of "The Happytime Gang," a beloved classic puppet show.

D. D.Reviewed in the United States on November 21, 2018
5.0 out of 5 stars
No sesame all street!!!!
Verified purchase
Disclaimer... This movie is NOT for kids... It's funny and super adult in it's humor... It's probably one of my fav movies of 2018, well worth watching the trailer, the actual movie is a lot of the same. When you make the realization that the Henson kids made this movie, it then feels like this was made in angst of the sale of the Henson properties to Disney. Disney even sued for this movie not to be released based on the tagline. No seasame, all street, that's all you need to know!!!!!
52 people found this helpful

Mark CalhounReviewed in the United States on November 28, 2018
4.0 out of 5 stars
X-rated Henson meets Melissa McCarthy
Verified purchase
It shouldn't work and I shouldn't have enjoyed it but it does and I did. I'm not going to say it's perfect or a masterwork but it is actually entertaining if you're cool with some raunch and remember the muppets of yore. I can feel the Henson in it and it is magic. The whole movie could have honestly been even better without the humans I think. Cheesy and ridiculous gags throughout but with just impeccable execution more often that not, you just don't see the rock solid delivery of shtick like that often anymore. Have two beers and watch this, just do it.
36 people found this helpful

Baba GanushReviewed in the United States on December 5, 2018
5.0 out of 5 stars
5 pts for the puppetering alone. SPOILER ALERT!
Verified purchase
As a detective story it was predictable. As film noir it hit all the basic marks on cue. As a muppet movie it did the trick. The sight gags were hilarious. I had to stop it at the octopus milking the cow. It was so raunchy and funny at the same time I nearly choked. I liked it as much as I thought I would.
31 people found this helpful

Kindle CustomerReviewed in the United States on December 26, 2018
5.0 out of 5 stars
BRILLIANT Writing & puppeteering & acting. Deeply moving, funny as hell, & multi-dimensional.
Verified purchase
The Happytime Murders was written by Todd Berger (as well as Dee Austin Robertson). The writing is superb. Over and over I heard things I wasn't expecting, instead of the cliches I've come to expect from movies. I laughed out loud--cackled and howled with laughter--many times. But the funny scenes were only one part of this film's achievement.

There's also the social politics dimension of a movie in which being a Puppet in a majority "meat -sack" world is like being Black in America. It's easy to dismiss this metaphor as heavy-handed in the film, but that would be to overlook the richness of what Todd Berger shows us about marginalization, prejudice, and systemic oppression, as the people with skin and flesh abuse the people with felt and fluff.

The Happytime Murders was directed by Brian Henson----whose parents were THE Jim Henson and Jane Henson, the puppeteering couple who invented the Muppets during their careers at Sesame Street. Jim Henson was at the heart of Sesame Street's unique feel, its visual idiom; it gave us the experience of seeing puppets behave as if they have souls. A great work of art.

And then... as the years went by, what began as a TV show for kids remained a TV show for kids, onto which there was soon built a mighty brand, with vast merchandising and global reach. To be clear: Sesame Workshop is a wonderful institution, whose work has expanded to include creating Muppets and storylines tuned specifically to the psychological needs of children with various kinds of traumas, losses, and stressors. But that's not the point.

The point is, Brian Henson's whole life has been lived in an environment saturated with the ethos of Sesame Street. I suppose a lot of his life is always already coated with his father's genius. Sesame St. is a children's show; its ethos always is, and always must be, wholesome, innocent, and enchanted. The bowl of cereal Brian Henson ate as a kid was paid for by his dad's art, the Muppets, within Sesame Street. What would it be like to grow up inside that? And to see, as you grow, the franchise/company/brand grow too, outpacing you as it brings in millions of dollars year after year. How cloying it must be, how fraught, and how frustrating it must be, to be forever surrounded by the culture of children's TV, especially in the form of the celebrated artistic work-product of one's own Oedipal rival. Making this film, The Happytime Murders, did for Brian Henson something like what making Wild Strawberries did for Ingmar Bergman: a working-through of the film-maker's relationship to his own father. In making this dirty film---it's trashy, violent (though bloodless), hardscrabble-noir---with its depictions of puppet semen and coroners cleaning up puppets' murders, Brian Henson cleanses himself of the ethos of Jim Henson's invented world. That ethos is great for kids. But for a person trying to grow into being his own man (an individuated adult of 20 or 30 or 40, etc. ), the sweet-sweetness-world of Sesame Street must feel like an endless overdose of sugar. In The Happytime Murders, sugar is evil, a debilitating drug, like heroin.

Freud taught that there are only two mature defenses available to the psyche: humor, and sublimation. This film has lots of hilarious lines and scenes. But the main course is the massive sublimation of envy, competition, Oedipal aggression and resentment, filial love and admiration for his father, and who knows what else. It gets transmuted into an artwork that uses the father's unique kind of puppetry to tell a completely different kind of story, diametrically opposed to the saccharine sunshine-and-rainbows world of kids TV. That world must meet children where they are, by providing an innocent little world, one with sorrows and misfortunes, but without evil or death or sex. So here is The Happytime Murders, full of sex and death and the evil of (prejudice against puppets, yes, and) the villainess, who turns out to have been motivated by unprocessed trauma, not just some arbitrary badness that comes with being the bad guy in the story. I love this movie.

Mac AttackReviewed in the United States on November 25, 2018
5.0 out of 5 stars
"Happytime Murders" is a Howl!
Verified purchase
Loved it! Lotta laughs! You gotta enjoy it for what it is, an R Rated Sesame Street. Truly one of a kind. I'm a big fan of Brian Henson too! He directed a killer " Nightmares and Dreamscapes" episode with William Hurt in the lead. He doesn't speak a word for 60+ minutes. Not many directors could pull that off and still make it compelling. Brian Henson nailed it! I really enjoyed this too! I'm glad I own it, It's funny as hell!
27 people found this helpful

S. YoungReviewed in the United States on December 11, 2018
1.0 out of 5 stars
This was a bomb...
Verified purchase
I love the muppets. I did not love this one. Five minutes in, my brother and I looked at each other and I said 'well, shall we watch something else?'
It's about a washed up PI who was a Police Detective and how puppets are second class citizens that are being murdered and he and is ex-partner who hate each other are out to solve it. In a very cringey manner. No laughs really to be found.
We made it through it. There were about four funny parts, but not really funny.
It just seemed like they added in every vulgar word and R rated thing they could think of just to do it. It didn't make it funny, it made it a little gross and uncomfortable, as if they were trying too hard.
McCarthy was so-so, I know she can act, but she didn't shine. Rudolph was the best as the secretary and she was in it about five minutes. Honestly, we liked the boar and crab the best and that was about a minute of the film.
I rented, hallelujah, because I would not want to own it. I would recommend pretty much anything else but this movie. If you want muppets, stay with the classics, if you want McCarthy - I actually liked her in Ghostbusters.
BTW, after that was done we had to cleanse our palates and we watched 'Clueless' - it was much better.
22 people found this helpful

SilkeReviewed in the United States on November 26, 2018
1.0 out of 5 stars
Vulgar and Dumb
Verified purchase
We could not finish the movie. It was so bad - skip this one.
25 people found this helpful

K DudeReviewed in the United States on September 23, 2022
5.0 out of 5 stars
Fun film, but definitely NOT for kids at all
Verified purchase
This is an enjoyable fun film to me. Yeah, half the characters are muppets and puppets, which I never thought I'd like, but this is no Sesame Street at all. I certainly hope no parents accidentally took their kids to see this because they saw the cute muppets on the poster. Thus ignoring the R rating in front of them or googling the film. Melissa McCarthy stars in this film, which helped to elevate it into pure good adult entertainment. It is sexually aggressive and in your face, so if you don't like sex or having it in your film or want to see muppets get it on, then skip this. The rest of y'all may enjoy it. It's more than just that in it, it's a muppet that's being framed for murdering other muppets, and Melissa McCarthy is the Detective on the case to help solve it. This is a fun comedy if you've got nothing else to do.
See all reviews
Back to top
Get to Know Us
Make Money with Us
Amazon Payment Products
Let Us Help You
EnglishChoose a language for shopping. United StatesChoose a country/region for shopping.
© 1996-2022, Amazon.com, Inc. or its affiliates