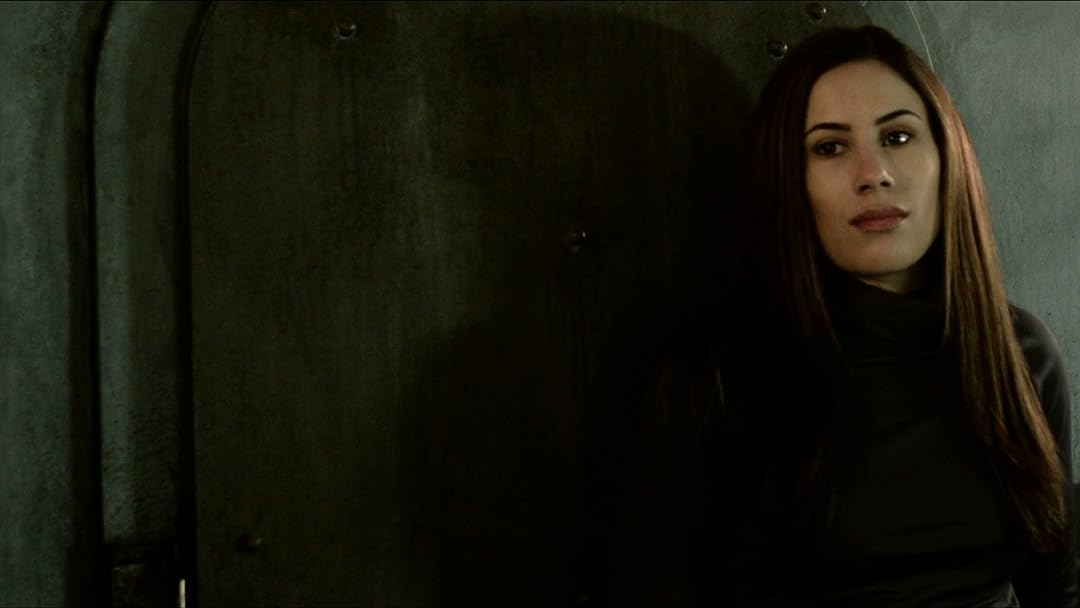 (547)
4.61 h 21 min2015R
While studying the effects of global warming on a pod of whales, graduate students on the ship Harbinger uncover a frozen Soviet space shuttle. After 30 years of thawing from the ice, a once trapped monstrous organism is unleashed on the students.

AnthymReviewed in the United States on November 6, 2018
2.0 out of 5 stars
A Film About Doors and Their Noises
Verified purchase
Lance Henriksen is top billed but the real star is Metal Door Opening Stock Sound No. 44. No. 44 does a lot of work for free here. It is in every other scene. In perhaps a career best, the performance of No. 44 never once wavers or alters. It is rock steady in its delivery. When director Alex Gillis asked for a bit more sympathy, more pathos, No. 44 looked him square in the eye and did not change one bit. Come Hell or High Water, Metal Door Opening stands guard over the bulkheads like a creaky gargoyle. It is the hero we need and the hero we deserve.
149 people found this helpful

That Adler WomanReviewed in the United States on October 26, 2018
5.0 out of 5 stars
It's all about context
Verified purchase
I'm glad I read the film trivia before I read the reviews or watched the movie. This film is not so much a sequel to The Thing (my favorite horror movie ever) but an homage to that film and how it was made. To that end, the story was straight forward and familiar and filled with references (in both the visuals and the dialogue) to the original movie and other well loved, pre-CGI, horror movies (Jaws). I loved the partnership between Lance Henriksen, who played major roles in so many movies of that ilk, and Matt Winston, son of one of the most famous special effects artists in the pre-CGI world. I wish I knew whether they had pre-existing relationships with any of the other actors, which if so, would have added additional richness to the context of the movie, at least for me. If you are looking for a new spin on a monster movie, this isn't it. If you are a fan of monster films and you are interested in the people who make them and how they are made, this is a wonderful reminder of the wealth of possibility that existed before computer graphics took over the big screen.
23 people found this helpful

MaliceReviewed in the United States on December 22, 2017
3.0 out of 5 stars
It sounds like a lot of other movies but it is well done.
Verified purchase
Per other comments about this movie It seems that this is a fairly low budget movie - but it's actually better than it's budget. A group of scientists go along on a crabbing boat in order to monitor a group of whales. When they encounter an object encased in ice they bring it aboard the boat with terrifying results. Think of it as Alien on a crabbing boat. There's characters to like and those you can't wait to see how they die. The plot isn't really special but it is nicely done, the acting is good and nothing looks "cheesy" or cheap.

I've been pretty "down" on a lot of Amazon Prime's movies but this was a good one.

Brad BaileyReviewed in the United States on February 15, 2021
1.0 out of 5 stars
At Last, The Movie Lance Henriksen Couldn't Save
Verified purchase
I "bit" on this one because of the numerous reviews citing it as being an homage to John Carpenter's The Thing, perhaps the most engaging practical-effects "B Movie" ever made, and also because it included ol' Lance Henriksen.
When it comes to the capable Mr. Henriksen, I agree with IMdB:
"An intense, versatile actor as adept at playing clean-cut FBI agents as he is psychotic motorcycle-gang leaders, who can go from portraying soulless, murderous vampires to burned-out, world-weary homicide detectives, Lance Henriksen has starred in a variety of films that have allowed him to stretch his talents just about as far as an actor could possibly hope."
Lance has his limits, however, and I think after reading this script, and hearing that the money was right, he probably said, "I'll do it, but only if you'll let me smoke cigarettes in every scene -- and also, you also buy the cigarettes. And also: Don't make me endure a screening of it when it's done," but I'm just guessing: He may have loved it, but I sure didn't.
As far as being an "homage to The Thing," it's more of a lame rip, in nearly every aspect.
You'd be better off reading the Wikipedia entry on all the accidental miracles that allowed Carpenter's Thing to get made than wasteing the 1:17 it takes for this misbegotten turkey-buzzard to finally flap all the way to the end credits.
I take no pleasure in harsh reviews, much prefer to single out a good one for praise, and usually just opt to "leave it alone" if I can't find something good to say. Here, I'm responding to my own feelings of, "Geez, I wish somebody had warned ME."
Harbinger Thumbs DOWN.

Writer/Producer/DirectorReviewed in the United States on December 19, 2019
2.0 out of 5 stars
Horrible Film. Miserable Effects. Atrocious Script. Give This One A Pass!
Verified purchase
For seem reason, although they admit that the script and most of the film are garbage, fan boys all rave about the practical effects. The film was primarily financed by a crowd-funding campaign largely on the backs of practical effects fans in response to the filmmakers' (Alec Gillis and Tom Woodruff jr.) having had their earlier practical effects work largely cut and replaced from The Thing (2011). So Harbinger Down is essentially a feature-length demo reel to showcase their work, the work of their practical effects company, StudioADI, and to serve the practical effects fan boys. The problem is that the resulting film (and the effects) are just plain horrible. Many reviewers will complain about most of the cast's acting. However, I don't think any of the actors should take the blame for bad scriptwriting and direction. I'd suggest everyone give this one a pass.
9 people found this helpful

The Casual ReviewReviewed in the United States on January 31, 2020
3.0 out of 5 stars
Creature on a ship-by the numbers
Verified purchase
Harbinger Down is a by the numbers "some type of creature gets on board a ship" movie. That is not to say it is a bad movie just nothing you haven't seen before and is predictable all the way through. Typical crew marking off all the check boxes on diversity--wise cracking black guy, native Inuit who speaks in wise sayings, large muscle head dude who is really a softy, sexy blonde babe who is really a trained killer, crotchety old ship captain, uppity college professor, and of course good looking 20 something woman as the lead. The movie is so predictable you can even pretty much guess which order people get killed off and who, if anyone, will survive.

My review may sound pretty negative however if you like this sort of movie it is a good quick watch. Clocking in under an hour and a half the action gets moving pretty quickly once the characters are introduced, the creature isn't too bad, and arctic isolation helps with the atmosphere. All in all a decent way to kill some time.
4 people found this helpful

DafReviewed in the United States on March 22, 2021
2.0 out of 5 stars
I'm still laughing at "What will grandma think?" "Grandma died three months ago."
Verified purchase
An ode to practical effects, 'Harbinger Down' immediately gets off on the wrong foot by opening with a terrible CGI shot, and while they accomplish some impressive things with the creature effects, they're not always presented well. Generally more of an imitation of a movie than a genuine one, 'Harbinger Down' is at its best the less the characters talk and the more they're venturing through dark corridors, so they probably should have cut out pretty much everything else and maybe padded out the rest of the running time with a sex scene or two.
One person found this helpful

D.H.Reviewed in the United States on March 23, 2021
3.0 out of 5 stars
NOT THE BEST, BUT DEF NOT THE WORST!
Verified purchase
From what I gather about this movie is that it's creator REALLY REALLY REALLY REALLY liked, John Carpenters' (The Thing) & (Alien), so much so that he literally used multiple lines from them in lieu of his own dialogue! He also apparently likes (Jaws) & (Deadliest Catch using footage from the show) too. I haven't finished it yet, but the best acting in it is done, by far, by Lance Henriksen of course. Now, I'm not a sailor by any means, & don't go to the ocean, or in it, so I could care less about women on boats crap, & if she can do just as well & not get the crew killed then have at it chicky, but you are NOT going to tell me that little miss perfect hair is some salty sea captain! It reminds me of those movies where the guy was the best at something, gives it up, but people keep trying to get him to go back because it's what he was just born to do, but you're not going to sell me on that particular chick being some amazing captain, able to steer a vessel as if it was an extension of herself! Even the most diehard feminist would agree with me on this one! I was surprised to find out that it's by the director of my all-time favorite movies, and I don't know why, (Starship Troopers)!
See all reviews
Back to top
Get to Know Us
Make Money with Us
Amazon Payment Products
Let Us Help You
EnglishChoose a language for shopping. United StatesChoose a country/region for shopping.
© 1996-2022, Amazon.com, Inc. or its affiliates