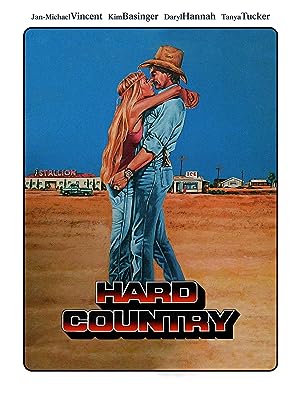 (85)
1 h 41 min1981R
A factory worker (Jan-Michael Vincent) with no ambition loves a woman (Kim Basinger) who wants to pursue a life outside of Texas.

Gary L. DibertReviewed in the United States on February 1, 2009
5.0 out of 5 stars
Kim Basinger Excellent Movie Debut
Verified purchase
TITLE: HARD COUNTRY was release on April 1 1981 and the time on this movie was 104 minutes. Hard Country is a 1981 dramatic movie starring Jan-Michael Vincent and Kim Basinger, and co-starring country music star Tanya Tucker along with Daryl Hannah. It was directed by David Greene and is rated PG in the USA.

SUMMARY: This picture opened in theaters in the USA sometime in April of 1981 starring Jan Michael Vincent as Kyle, Kim Basinger who made her movie debut in this picture starred as Jodie, Michael Parks as Royce and Gayland Sartain as Johnny Bob. This movie is about the lives and that great state of Texas. No one ever moves away from the great state of Texas or even thinks about except one person. That person is a very young lady who's name is Jodie and she works for the telephone company. Jodie is filled with love and has that Georgia charm that makes anyone that comes around her fall in love with her right away. Jodie leaves with a young man name Kyle. Kyle is a young Texas boy who works at a local factor making chain link fences. These two young kids lived together in a little mobile home along with Kyle's dog. The problem is that Kyle likes the some country bars his friends and drinking beer while Jodie wants more. The country bar that everyone goes to is Stallions where they sing drink beer and have a good old country time. One night while at Stallions, a young woman that Jodie grew up is announced as tonight's entertainment and her name was Caroline. After Caroline is down singing her and her friend all, meet at Jodie place to drink and talk. Caroline and Jodie go into another room where they catch up on old times. Jodie biggest dream is that she wanted to become a flight attendant. The next day while at work, one of Jodie's coworkers shows her and ad in the local paper that states that the airlines are holding interviews at the local Marriott Hotel. While in the interview Jodie is asked if she would be willing to go to California for training and she accepted now all she has to do is wait to see if she can get the letter in the mail that states that she was accepted. Things start to erode when while at the Stallion Kyle is called out in a drinking game. The object of the game is both players get a pitcher of beer and the first person that drinks it all and puts his pitcher on the bar wins. After sitting and watching this, Jodie gets up and walks out because she had enough of Kyle childlike behavior.

QUESTIONS: Will Jodie get accepted to the airlines as an Attendant? Will Kyle ever grow up and realize that what he has with Jodie is hard to find. Will Jodie dream of leaving Texas and moved to California ever happen.

MY THOUGHTS: I thought this movie kind of drag a little even thought it had action, adventure, and drama in it. I thought that Kyle was your typical young man who had a good thing going but continue to act like a jerk. I thought Kim Basinger was excellent in her movie debut. She had spunk and knew when to use it. She was not only beautiful but she has talent also. I love the scene where she's cooking breakfast in her underwear and the other scene where she lying in bed with her legs up showing off the gorgeous thighs. I think that this movie could've used some more drama but Kim Basinger saves this movie and that's why I'm going to give this movie 10 weasel stars base on Kim Basinger alone. Kim Basinger movie debut was fantastic

kelReviewed in the United States on April 26, 2021
5.0 out of 5 stars
Hard Country
Verified purchase
This is another Urban Cowboy I like it. and I hope you do to....
One person found this helpful

Karen M. BrownReviewed in the United States on June 15, 2017
5.0 out of 5 stars
Gotta love Jan Michael Vincent!
Verified purchase
One of my favorite movies of both actors.
One person found this helpful

Ginger WilsonReviewed in the United States on October 3, 2020
5.0 out of 5 stars
a good movie
Verified purchase
good to see the cast

nickiefromwyoReviewed in the United States on June 30, 2019
1.0 out of 5 stars
Terrible
Verified purchase
Did I really live through this era? Such disgusting macho behavior.
2 people found this helpful

Amazon CustomerReviewed in the United States on August 1, 2003
5.0 out of 5 stars
A Great Movie
Verified purchase
This movie was great. A really sweet love story. While I have to admit Jan-Michael Vincent isn't my ideal leading man, I thought he did a wonderful job in this movie. Kim Basinger and Jan-Michael Vincent play Kyle and Jodie, two lovers in a small Texas town. Kyle is a factory worker, whose favorite pastime is downing beers with his buddies at the local bar. Jodie his girlfriend is getting sick of the small town life and wants something more. Jodie's friend Caroline(played by country star Tanya Tucker) returns for a visit after hitting it big in Hollywood. Jodie's desire for a new surrounding grows even stronger than ever after Caroline's visit. She now has to decide if she's going to stay or leave to fulfill her dreams. Tanyna Tucker sings two GREAT songs in this movie. The rest of the soundtrack is wonderful too. Daryl Hannah is great as Jodie's little sister. If you liked Pure Country you'll like this movie. It shows the joys and frustrations of small-town life, honestly portrayed by a wonderful cast in this poignant, romantic movie.
20 people found this helpful
See all reviews
Back to top
Get to Know Us
Make Money with Us
Amazon Payment Products
Let Us Help You
EnglishChoose a language for shopping. United StatesChoose a country/region for shopping.
© 1996-2022, Amazon.com, Inc. or its affiliates