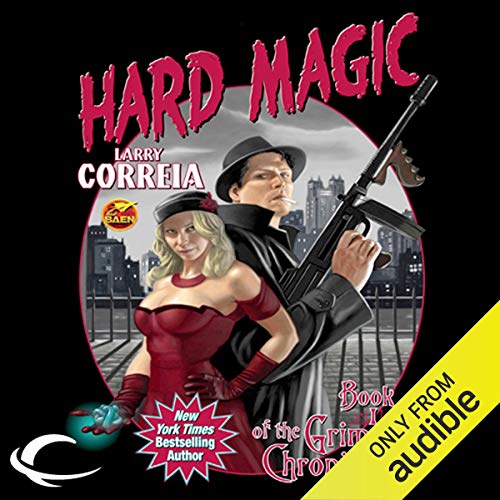 Hard Magic: Book I of the Grimnoir Chronicles

4.7 out of 5 stars
4.7 out of 5
579 global ratings
How are ratings calculated?
To calculate the overall star rating and percentage breakdown by star, we don’t use a simple average. Instead, our system considers things like how recent a review is and if the reviewer bought the item on Amazon. It also analyzes reviews to verify trustworthiness.
Top reviews

vegasbill
VINE VOICE
4.0 out of 5 stars X-Men Meet Film Noire
Reviewed in the United States on January 5, 2017
Verified Purchase
Think X-Men meet film noire. Larry Correia has created a parallel universe taking place in the post WWI era that reads like a black and white serial we used to see at the movies. You can almost see the screen wipes and closing irises as each chapter comes to an end. "Actives", characters with a magical ability, like X-Men, constitute a small minority of the population of the world and for the purposes of this story are primarily divided into good (American and European) and bad (Japanese) with a few exceptions. The bad guys want to take control of the planet by exploding a doomsday device that will virtually destroy the US and bring the rest of the world to its collective knees. Lighter than air flying machines are the transports and military air weapons of choice. There is action aplenty and interesting, fun characters some better than good and some evil incarnate. Fight scenes are terrific and pull no punches, pun intended, as bodies at times are torn or blown apart causing fountains of blood to coat the combatants. There are zombies, ninjas, wizards, real historical figures and even a few "Normals" thrown into the mix. Spoiler alert, don't be too disappointed if your favorite character is mortally wounded or even killed as there are ways to bring them back.

The only reason I didn't give this book 5 stars is that it reads like a graphic novel. The dialogue is stilted and compares to that of the Star Wars films. This is not a book that requires any deep thinking on the part of the reader nor will you be rolling the plot around in your mind once you have finished the book. It is mind candy, a guilty pleasure you can enjoy for what it is and escape the reality of life. If that is what you are looking for and enjoy then I highly recommend this book.
Read more
16 people found this helpful
Helpful
Report abuse

Kent A. Larson
5.0 out of 5 stars Some good, hardboiled fun! Great mixture of fantasy, sci-fi, and adventure.
Reviewed in the United States on April 20, 2019
Verified Purchase
Larry Correia is always fun to read but this is almost silly fun.

The characters are comic book material but that's the joy of it. Just sit back and enjoy the pantheon of characters as they come onto the stage. The storyline is epic and draws you in as well as the heartstring pull of our main character.

As usual, the violence is not graphic, the romance is clean, and the language is PG at worst. It is so nice to find clean reads these days. I highly recommend this book, this series, and this author. I met him at a local convention and he is very cool to speak with about anything.
Read more
6 people found this helpful
Helpful
Report abuse

Rocky's Dad
5.0 out of 5 stars Terrific Read, Terrific Series! Made for Readers who Love a Good Story and a Good Voice.
Reviewed in the United States on February 15, 2017
Verified Purchase
This is the first of another terrific series of novels by Larry Correia, author of the Monster Hunter International series of creature-features. As an amateur writer, the thing that amazes me about Correia, other than his apparently unlimited imagination, is his willingness to throw his protagonists into the most lethal and terrifying circumstances, then come up with deliverable escapes for them. Then, after they've escaped by the skin of their teeth, he collects them up and throws them into something much worse! It's a lot like a multi-player team combat game in a way. You start at Level 1 (first novel), and the challenges keep getting tougher until you're confronted with the Big Boss of the level. Survive him, and congratulations! You're on to Level 2 (second novel) where the challenges are harder, and the Boss of this level could eat the first boss for breakfast. I can't tell you how much I admire any writer who can pull this off again and again using different strategies and challenges each time, while making the conflicts and escapes fit with the world and logic of the overall story. This is rare stuff, indeed, and not to be missed by readers who read for Story above all things.
Read more
5 people found this helpful
Helpful
Report abuse

Alex
5.0 out of 5 stars I gotta apologize to Larry
Reviewed in the United States on October 24, 2013
Verified Purchase
I like reading and books and bookstores and I like to browse and just look at the covers. I read a lot so I try to try new books and authors I haven't read before. I saw Monster Hunters and Hard Magic on the shelves and read the backs and had this snobbish kind of reaction to them. "Oh its pulp. Just a Garret Files rip-off. Move on" I'm really sorry. I saw a recommendation on maybe IO9.com and decided to give him a try and got Monster Hunters International. I loved it. I read the books in that series and now I'm on the Grimnoir books and ripping through those and telling everyone I can about them. Nobody is ever going to say things like, "this is a groundbreaking classic, changed the genre for all time!" but it doesn't stop them from being awesome. I compare them to Clive Cussler's early Dirk Pitt books. The heroes are good people trying to do the right thing because its the right thing to do. You care about what's going on in the story and I find myself rushing to see how it's going to end. I've never gotten to the end of one of Corriea's books and felt like it's just a come-along to the next book. My parents introduced me to Clive Cussler. It was in my teenage years and it was the first time that I had something to connect with my parents and realize that my parents had interests outside of me and my brother. It was a good time in my life. These stories bring me back there. Really, doesn't good literature make the reader form those relations to their own lives?

Anyway, Larry Correia, I apologize for sticking my nose up in the air. Thank you for writing these great books. Give them a try people.
Read more
20 people found this helpful
Helpful
Report abuse

Daniel Schwartz
5.0 out of 5 stars A classic!
Reviewed in the United States on January 2, 2021
Verified Purchase
Non-stop adventure that makes you think. Big tough guys with machine guns, beautiful women who more than hold their own. Evil enemies with complex backstories. And an irrepressible teenage girl to tie it all together. Mr. Correia has built a fascinating world, very like ours, but just different enough to make you say "wow" when you least expect it.

The title is accurate. What if magic suddenly appeared in the world, and it made hard logical sense? What would such a world look like? How would some people be different, and what adventures might they have?

When you finish, you'll be hungry for more. A good thing he wrote two sequels!

One more comment. Look out for the cameos. The book is filled with them, and they're wonderful.
Read more
Helpful
Report abuse
See all reviews

Amazon Customer
4.0 out of 5 stars A fun read
Reviewed in the United Kingdom on February 6, 2016
Verified Purchase
I went into Hard Magic expecting something like the Dresden Files, but the book is more like prohibition-era X-Men, set in an alternative 1930s where people have started developing mutant- sorry, *magical* powers. It's pulp, but it's good pulp, and I read through all three books in quick succession. It's not a perfect read, but the pacing is good, the world and powers are well fleshed out, and the characters are rather more three-dimensional than his previous, Monster Hunters International series. The main character is admittedly very similar to the one in Monster Hunters, but somehow no longer feels like a blatant self-insert.
Read more
2 people found this helpful
Report abuse

Justina Z.
5.0 out of 5 stars Great book for fantasyaction fans
Reviewed in the United Kingdom on October 2, 2014
Verified Purchase
I had this book on my wishlist for a while and I was hesitating a while. From the description it did not seem too interesting, but the good reviews were pushing me to buy it. I have just read the whole series of "Ketty Jay" and it was hard to expect something as equally interesting and involving as that.
However this book is just great. GREAT! The book starts as several separate stories of the main characters and slowly tangles into one story. The book is packed with action, quick paced, character portraits are bold and vivid. The classic fight against good and evil is not left to one hero, but to a team of people who are united for that one reason.
I have just bought the second part of the series and I would recommend this book to people who enjoy fantasy action books.
Read more
2 people found this helpful
Report abuse

Gopher
5.0 out of 5 stars Hard Magic but a great story
Reviewed in the United Kingdom on September 1, 2014
Verified Purchase
I didn't know this author when I bought this book on kindle only returning to SF reading after a few years off. The writing style has similarities to Glen Cook's Garrett, PI stories with a tough (heavy) hero or at least one of the primary characters is.

Set in a world where PSI powers have become more prominent in the last hundred years there are international tensions and effectively an undeclared war which the heroes are involved with. Unlike one reviewer I didn't find switching between primary characters a problem as it allowed characters and the story line to develop. I can't wait to start reading the rest of the series.
Read more
2 people found this helpful
Report abuse

D. L. J. Kite
5.0 out of 5 stars Hard Magic
Reviewed in the United Kingdom on April 14, 2017
Verified Purchase
Great read, I really like the characters, who are everyday people with very extraordinary powers. It reminded me of Eddie Droods world, in the best possible way. I liked the setting in a world not to dissimilar to our own. Very bad villains and heroes that are slightly tainted in their own way. Fab
Read more
Report abuse

ron jacob
4.0 out of 5 stars However better character building and more importantly multiple POVs
Reviewed in the United Kingdom on April 15, 2015
Verified Purchase
Came back from reading his MHI works...so a bit of a let down as compared to fast paced action of MHI. However better character building and more importantly multiple POVs. Plausible alternate history and although not technically steampunk.....close enough with the point of divergence being the continued significance of lighter than air flying machines
Read more
Report abuse
See all reviews
Back to top
Get to Know Us
Make Money with Us
Amazon Payment Products
Let Us Help You
EnglishChoose a language for shopping. United StatesChoose a country/region for shopping.
© 1996-2021, Amazon.com, Inc. or its affiliates