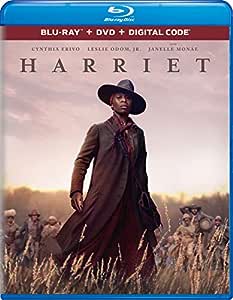 Based on the thrilling and inspirational life of an iconic American freedom fighter, Harriet tells the extraordinary tale of Harriet Tubman's escape from slavery and transformation into one of America's greatest heroes. Haunted by memories of those she left behind, Harriet (Cynthia Erivo) ventures back into dangerous territory on a mission to lead others to freedom. With allies like abolitionist William Still (Leslie Odom, Jr.) and the entrepreneurial Marie Buchanon (Janelle Monáe), Harriet risks capture and death to guide hundreds to safety as one of the most prominent conductors of the Underground Railroad. Witness the story of a woman who defied impossible odds to change the course of her life and the fate of the nation.

4.7 out of 5 stars
4.7 out of 5
3,478 customer ratings
How does Amazon calculate star ratings?
Amazon calculates a product’s star ratings based on a machine learned model instead of a raw data average. The model takes into account factors including the age of a rating, whether the ratings are from verified purchasers, and factors that establish reviewer trustworthiness.

Shelley D. Bowen
5.0 out of 5 stars Disregard negative reviews, go in with an open mind and enjoy/be astonished
Reviewed in the United States on November 19, 2019
Format: Prime Video
This movie has gotten many mixed reviews but I must say, after reading up on Harriet Tubman thoroughly before I saw this and seeing the really bad reviews or rave reviews, I’m glad that I didn’t pass on this. This movie has a lot of passion in it and really shows who Harriet was as a person, details her accomplishments, and does a great job of being an entertaining film. One consistent theme that is explored is her devotion to God and how she believed that God helped her to face the odds and guide her in the right direction in freeing the runaway slaves ( her nickname was Moses). I think it would be a mistake to say that this movie glorified one race more than another; in my opinion, it showed that Harriet was fighting for humanity with both black and white allies. There are white slave owners that are depicted realistically and I found myself disgusted at the horrific mindset they had and how they abused their slaves but also there are black slavecatchers who help the slaveowners retrieve their slaves with brutality that is hard to watch at times but it goes to show again that this movie is trying to show that the Underground Railroad and the anti-slavery movement was supported wholeheartedly by both races. I’m glad that a movie was made about this incredible woman that shows her as the revolutionary liberator that she was who fought against injustice and faced death every time she did it and never wavered. As for people saying that Harriet loved a white slave owner, that is not true; she outright says it in the movie that she despised her owners for the abuse but because of her moral character she did not lower herself to their level and murder. Maybe not everything in this movie is 100% accurate but for a Hollywood film, this was extremely well done and well acted. The woman who portrayed Harriet deserves an award in my opinion. Do not listen to the people telling you to not see this, have an open mind and form your own opinion about it; I’m pretty sure you will be glad you did because I felt like I was both entertained and enlightened at the same time. Recommended
Read more
277 people found this helpful
Helpful
Comment Report abuse

It’s still not an easy fact for many Americans to fathom, even more than a century later.

To place the subject into perspective, look at it this way: While many of us are descended from ancestors who traveled to America from other countries to escape persecution and pursue a life of freedom, many of us are descended from ancestors who were kidnapped from their homes in other countries and transported to America against their will to be bought and sold as property of others, forced to provide manual labor in homes and on farms...and beaten, tortured, raped, maimed, or even executed if they tried to escape to freedom.

Still, many of these enslaved people risked their lives by attempting to flee. And among the most honored and revered of those courageous souls is Harriet Tubman. Born into slavery in Dorechester, Maryland, Tubman escaped enslavement and made her way, alone and on foot, over 100 miles to freedom in Pennsylvania. Over the years, Tubman risked her life again and again by making some thirteen trips back into Maryland and the southern United States to rescue dozens of others.

One of the strengths of “Harriet,” the new biographical film from Focus Features, is that the picture tells Tubman’s story in a straightforward, unembellished way, without sermonizing or pity, condescension or scolding. Written by director Kasi Lemmons in collaboration with Gregory Allen Howard, who’s also the screenwriter behind the fact-based inspirational drama “Remember the Titans” in 2000, “Harriet” draws its enormous emotional power by depicting the harsh and often difficult historical facts in a serio-documentary style.

“Harriet” draws a direct parallel between the events which preceded the American Civil War and the events described in the Bible’s Book of Exodus. Even Tubman’s pseudonym, used by the plantation owners who hunt her during her later excursions into the South to transport slaves to freedom, is Moses. And on the strength of the emotional conviction in her quiet and understated performance in the title role, actress Cynthia Erivo accomplishes much the same effect actor Charlton Heston contributed to his role as the Biblical Moses in 1956’s “The Ten Commandments.”

To augment the spiritual metaphor, the movie has the audacity--or the courage--to depict, plainly and without a hint of skepticism, Harriet’s “visions.” Sustaining a skull injury at age thirteen as the result of a slavemaster’s fury, Tubman throughout her life experienced periods of dizziness and near unconsciousness, during which she believed God was speaking directly to her and guiding her movements. Asked in the film by an incredulous Philadelphia abolitionist if she actually made the 100-mile journey to freedom alone, Harriet shrugs, “Me and the Lord.” And later, when asked to describe her visions, Harriet remarks simply that they “make God’s voice more clear.”

“Harriet” is receiving encouraging reviews from the critics, including an approval rating of 72% from Rotten Tomatoes and 66% from Metacritic. Rotten Tomatoes notes that the picture “serves as a sincere tribute to a pivotal figure in American history...albeit one undermined by its frustratingly formulaic approach.” Exit audiences polled by CinemaTrack award “Harriet” the rare exit grade of A-plus.

Released to 2059 theaters across the United States and Canada, distributor Focus Features expected “Harriet” to earn as much as $9 million during its opening weekend. After earning $3.9 on its opening day alone, the picture ended the weekend with $12 million in earnings, scoring the third place spot in the Box Office Mojo Top Ten, behind the new “Terminator: Dark Fate” and the returning DC Comics-inspired “Joker,” now in its fourth week of release.

Director Kasi Lemmons is also the writer and director of the acclaimed “Eve’s Bayou” from 1997, the 2007 biographical film “Talk to Me,” and 2013’s “Black Nativity.” A former actress, Lemmons appeared as Clarice Starling’s FBI roommate Ardelia Mapp in the Academy Award-winning “The Silence of the Lambs” in 1991. Actor Vondie Curtis-Hall, who plays Reverend Samuel Green in “Harriet,” is Lemmons' husband.

Alexus
1.0 out of 5 stars Disgusting, Disgracefull, Embarassing, and TRASH!!
Reviewed in the United States on November 7, 2019
Format: Prime Video
I rate this movie with 1/16 a star. This movie portrays black men as the enemy. It completely mischaracterizes everyones role in this movie. This movie is dangersous to young children if they watched it they will be brainwashed and mislead on what’s right and what’s wrong and on what really happened. They will see this as a black man trying to stop a sister from helping out other sisters and brothers to gain freedom from the barbaric whites. Whites were the primary slave catchers and always have been. Hollywood is not your source to such precious information. Hollywood made the black man the enemy and made the white man the hero. Harriet in this movie loved a white man? Get the heck out of here with that because this woman was MARRIED. There is no way in a million years she would have ever fell for her master. You can’t compare Mandingo either cause that movie was 10,000% fake. This movie is SICK to name a fictional black man Bigger Long; stereotypical name! Shame on that director for this movie!
Read more
172 people found this helpful
Helpful
Comment Report abuse

SuperMom26
5.0 out of 5 stars An excellent portrayal of Harriet Tubman. Ignore the negative reviews.
Reviewed in the United States on January 15, 2020
Format: Prime VideoVerified Purchase
This movie was an excellent portrayal of Harriet Tubman. In no way does this movie glamorize slavery, try to make white people the heroes of slavery or show Harriet in love with a white man. The people who said that are actually spreading lies and should have their comment removed. This movie shows Harriet's strength against all odds to free her people and unlike all other slaves movies is both enlightening, empowering, educational. I will be watching this movie with my four children and we will discuss the significance of her actions and the struggle.
Read more
118 people found this helpful
Helpful
Comment Report abuse

Icthus
5.0 out of 5 stars A movie for the ages
Reviewed in the United States on November 5, 2019
Format: Prime Video
A profound cinematic experience! The story is the story. No “big name” actors to distract or gratuitous sex, violence or the cliches that could have so easily overtaken this powerful story of am amazing woman and the results of her passionate determination to be free or die. We need more people like her today speaking truth to power.
Read more
121 people found this helpful
Helpful
Comment Report abuse
See all reviews from the United States