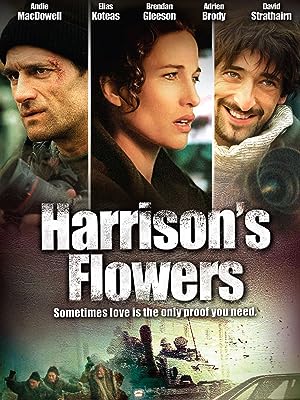 MaddsPhotoReviewed in the United States on June 24, 2013
5.0 out of 5 stars
GET THIS PAL/FRENCH VERSION, the USA VERSION IS DUMBED DOWN...
Verified purchase
Okay, hear me out, when I first saw Harrison's flowers on HBO almost a decade ago I was enthralled by it; being a photographer and a war buff I was pleasantly surprised and shocked to see this portrayal of war photographers at work in what was the 90's biggest war for correspondents (in the sense that it was one of the only conflicts they were free to roam and get shots you couldn't get by being embedded with US troops in Desert Storm - or be under constant bombardment by Russia in Grozny, Chechnya). The Yugoslav war definitely stands out for war photographers as something special, good or bad, it was special for them.

Onto the movie, FRENCH/PAL version vs. American release. Hands down the FRENCH version is superior and it was VERY difficult to find when I bought it, now there's a few copies floating around...

The PAL/French release however is far superior, you can see great actors such as Brendan Gleeson, Elias Koteas, Caroline Goodall, and even Gerard Butler give these cutaway type interviews in between the action from the eyes of War Photogs (and their families) which they totally cut out of the American version. I can understand why they watered down the American version, they made the story more concise and about Andie McDowel's journey to fight her husband which can be a plus depending which way you look at it. But personally, after seeing the American version and the French version (this version I'm reviewing) I'll recommend everything about the French version except the original score which was generic and not very special, the rest, is just a deeper look into the conflict, a deeper look into the mentality of war photographers under fire, and the story of Andie McDowell finding "Harrison" is almost second to the war itself.

If you like Harrison Flowers (USA) you'll really at least find Harrison's Flowers (REGION 2) interesting, if not totally awesome.

DigeratusReviewed in the United States on July 13, 2020
1.0 out of 5 stars
Superficial characters, predictable script., filled with platitudes.
Verified purchase
If you seriously want to watch a true-to-life film about photographers and journalists who grab their readers/viewers by the throat and shove them into the midst of the horrors of war, watch the biopic about war correspondent Mary Colvin and her freelance photographer, “A Private War.” Colvin wasn’t looking for Pulitzers. She was looking for truth.

J. Erin DuganReviewed in the United States on June 5, 2019
5.0 out of 5 stars
Love it
Verified purchase
Good story well done. Andie McDowall is an excellent actress. Kind of a surprise, most great models are a little wooden and "posing" as actresses. She's great!

normfieldsReviewed in the United States on December 29, 2016
5.0 out of 5 stars
Civil war and ethnic cleasning on steroids
Verified purchase
Photographers risk their lives to capture the brutality of the Serb/Croatian civil war in 1991.

ronda zanderReviewed in the United States on December 8, 2016
4.0 out of 5 stars
A Good Show
Verified purchase
Used to live I Croatia. Although film was filmed in Czech Republic, it felt like it was in Croatia. The little girl with yellow scarf...can't get her off my mind.

Irfan UddinReviewed in the United States on January 25, 2008
4.0 out of 5 stars
balkans movies
Verified purchase
War footage is uncannny in its reality. They must have gone to post Bosnia war areas to get footage of destruction that they showed. Delivers a powerful reminder of the ugliness of the Bosnian war that happened in the civilized western neighbourhood only 18 years ago.
See all reviews
Back to top
Get to Know Us
Make Money with Us
Amazon Payment Products
Let Us Help You
EnglishChoose a language for shopping. United StatesChoose a country/region for shopping.
© 1996-2021, Amazon.com, Inc. or its affiliates