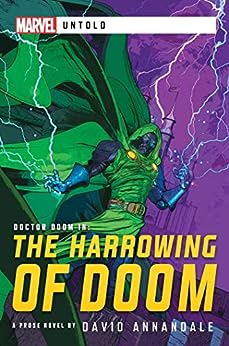 The Harrowing of Doom: A Marvel Untold Novel Kindle Edition

by David Annandale (Author) Format: Kindle Edition
Part of: Marvel Untold (1 books)
See all formats and editions
Sorry, there was a problem loading this page. Try again.
Our thrilling new line bringing new tales of Marvel’s Super Heroes and villains begins with the infamous Doctor Doom risking all to steal his heart’s desire from the very depths of Hell

Notorious villain Doctor Victor von Doom has finally found a solution for his oldest obsession: rescuing his mother’s soul from the clutches of Hell. An alliance with the reclusive sage, Maria von Helm, has provided the key to Doom’s latest invention. Fusing their super-science and sorcery, Doom has created the Harrower, a device that will open a rift and wrench his mother’s soul from the netherworld. Back in the human world, however, rebel forces threaten to overrun Latveria and topple its dark leader – and revolution couldn’t come at a more dangerous time than when the gates of Hell itself have been unlocked
Read more
Previous page
Next page

Audible Holiday Deal
Join Audible Premium Plus for 60% off. Only $5.95 a month for the first 3 months. Get this deal
Books In This Series (1 Books)
Page 1 of 1Start OverPage 1 of 1
Previous page
Next page 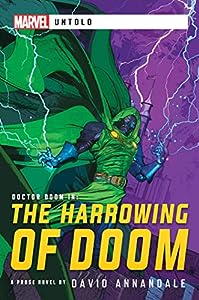 DAVID ANNANDALE is a lecturer at a Canadian university on subjects ranging from English literature to horror films and video games. He is the author of many novels in the New York Times-bestselling Horus Heresy and Warhammer 40,000 universe, and a co-host of the Hugo Award-nominated podcast Skiffy and Fanty.

4.5 out of 5 stars
4.5 out of 5
42 global ratings
How are ratings calculated?
To calculate the overall star rating and percentage breakdown by star, we don’t use a simple average. Instead, our system considers things like how recent a review is and if the reviewer bought the item on Amazon. It also analyzes reviews to verify trustworthiness.
Top reviews

Samantha H.
3.0 out of 5 stars Cinematic Yet Surface Level
Reviewed in the United States on December 1, 2020
I voluntarily read and reviewed an advanced copy of this book. All thoughts and opinions are my own.

The Harrowing of Doom by David Annandale tackles notorious villain Doctor Victor von Doom from a whole new perspective. This time around, Doom teams up with the wise Maria von Helm to create the Harrower, a device that will rescue his long-gone mother from the depths of Hell. But when a rebellion begins to rise to knock Doom from power just as his invention nears completion, all Hell breaks loose. Literally.

A tale told through Marvel’s signature cinematic nature, The Harrowing of Doom plays out like a movie, an ensemble cast with a variety of quick take vignettes dropping its audience all throughout Latveria -- Doomstadt in particular -- as its leader endangers himself while trying to protect his city -- while a quiet revolution grows ever louder day by day.

Most definitely written with Marvel movie fans in mind, this cinematic exploration of Victor von Doom’s enigmatic mind is just that: enigmatic. I never quite knew the specifics of what was going on or why, but I didn’t really mind? That said, the ensemble of characters was so diverse that Doom didn’t really stand out as the protagonist, and his murky motives prevented me from truly supporting his actions -- except for, that is, attempting to do his best for Doomstadt. As a die-hard Marvel fan, I enjoyed this look at Doom’s motivations and schemes; I just wish it felt like a deep dive rather than a surface level scuba.

Marvel Entertainment, LLC, a wholly-owned subsidiary of The Walt Disney Company, is one of the world’s most prominent character-based entertainment companies, built on a proven library of more than 8,000 characters featured in a variety of media for over eighty years. Marvel utilizes its character franchises in entertainment, licensing, publishing, games, and digital media.

Spidey
4.0 out of 5 stars Dr. Doom gets his own prose novel.
Reviewed in the United States on September 29, 2021
Each year on the summer solstice, Doom does battle with Hell to free his mother's soul. Each year he fails. Until now. Now he has a plan with hope for success.

I liked that Annandale brought in a bunch of other characters and told parts of the story from their perspective as well. I also enjoyed how Doom is more of an antihero here instead of a straight up villain like he's often portrayed in the comics. Annandale gives him more nuance. He cares for his subjects. It's just that he knows what's best for everyone. It's the same reason he plans to one day rule the world, because only Doom can fix everything. I also enjoyed how Annandale brought in the former Prince to foment rebellion among the ex-royalty of Latveria.
Read more
One person found this helpful
Helpful
Report abuse

It's all very majestic with a heavy use of the works of Byron and noble European swaggery in its description, when I really think it's trying hard to be dark, Gothic, and foreboding. Doom designs himself to be a charismatic benefactor, inviting people to be near him, among him, while unwittingly treating them like peons, then fighting against comparative evil to 'save' them and to protect the world from devastation, I guess.
Read more
One person found this helpful
Helpful
Report abuse