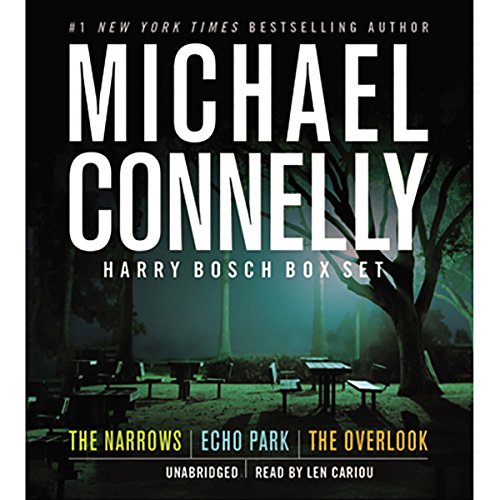 The Narrows (AudioFile magazine Earphones Award Winner): FBI agent Rachel Walling finally gets the call she's dreaded for years, the one that tells her the Poet has surfaced. She has never forgotten the serial killer who wove lines of poetry in his hideous crimes - and apparently he has not forgotten her. Former LAPD detective Harry Bosch gets a call, too - from the widow of an old friend. Her husband's death seems natural, but his ties to the hunt for the Poet make Bosch dig deep. Arriving at a derelict spot in the California desert where the feds are unearthing bodies, Bosch joins forces with Rachel. Now the two are at odds with the FBI...and squarely in the path of the Poet.

Echo Park (2007 Audie Award Winner for Mystery): In 1995, Marie Gesto disappeared after walking out of a supermarket in Hollywood. Harry Bosch worked the case but couldn't crack it, and the 22-year-old woman never turned up, dead or alive. Now Bosch is in the Open-Unsolved Unit, where he still keeps the Gesto file on his desk, when he gets a call from the DA….

The Overlook: In his first case since he left the LAPD's Open Unsolved Unit for the prestigious Homicide Special squad, Harry Bosch is called out to investigate a murder that may have chilling consequences for national security. A doctor with access to a dangerous radioactive substance is found murdered in the trunk of his car. Retracing his steps, Harry learns that a large quantity of radioactive cesium was stolen shortly before the doctor's death. With the cesium in unknown hands, Harry fears the murder could be part of a terrorist plot to poison a major American city.

Special invitation from Audible!
Learn more about Membership
List Price: $39.91
You Save: $4.99 (13%)
By completing your purchase, you agree to Audible’s Conditions Of Use
Sold and delivered by Audible, an Amazon company
Share

4.5 out of 5 stars
4.5 out of 5
32 global ratings
How are ratings calculated?
To calculate the overall star rating and percentage breakdown by star, we don’t use a simple average. Instead, our system considers things like how recent a review is and if the reviewer bought the item on Amazon. It also analyzes reviews to verify trustworthiness.
Top reviews

MsAnnie
4.0 out of 5 stars Disk are very clean. Enjoyable read.
Reviewed in the United States on July 30, 2019
Verified Purchase
They are very packaged together, sharing the same protective foldouts. It would have been easier to have them properly divided, but as this is my only complaint, you can assume a very satisfied with the purchase. Michael Connelly is like a 90s Dick Tracy writer. You do get a perspective of the horror of evil people, and at the same time, the obsessive, way above normal, detective with all ego and no personal life. That makes it rather fun, b-movie entertainment. The reader has a great voice, and makes feel the character.
Read more
Helpful
Report abuse

Michelle M
5.0 out of 5 stars Three great audio books in one package - they really are top notch thrillers
Reviewed in the United States on September 5, 2019
Verified Purchase
This is a great collection of audio books from Conelley and the narrator is fantastic. The stories are suspenseful and there are some unexpected twists at just the right moment. They made the drive to and from work much more bearable and I recommend this set for anyone who like a suspense thrillers.
Read more
Helpful
Report abuse

Zunie
4.0 out of 5 stars Michael Connelly and Len Cariou. A perfect combination!
Reviewed in the United States on April 19, 2014
Verified Purchase
I always love Michael Connelly's Harry Bosch stories. Such a complex and interesting character. And I think of Len Cariou's voice as THE voice of Bosch. I have read all three of these books, but I always listen to the book later, also. Bosch has been my cross country and across town companion many times.

My only complaint about this purchase was that a disc was missing. There are 23 hours of listening, so it takes a while to get through. I didn't catch the problem until it was too late; Amazon has a 30 policy for exchanges. I have never had this happen before, so I didn't count the discs right away. Lesson learned. I feel burned that I missed the second to last disc when things were getting exciting!
Read more
One person found this helpful
Helpful
Report abuse

oheo
5.0 out of 5 stars fun and well done
Reviewed in the United States on August 15, 2012
Verified Purchase
The Michael Connelly books are consistently great. The reader is good. The stories well executed with no pretense. As a person doing long commutes, I switch back and forth between non-fiction and fiction. I can count on Harry Bosch to keep me awake and safe on the road!!
Read more
4 people found this helpful
Helpful
Report abuse

Rick Stone
5.0 out of 5 stars Harry Bosch
Reviewed in the United States on January 17, 2013
Verified Purchase
Great value for any Michael Connelly/Harry Bosch fan. The audio tapes compliment the books, rather than replaces them. But they are great if you do a lot of driving and your opportunities for reading are limited.
Read more
One person found this helpful
Helpful
Report abuse

Bookworm
5.0 out of 5 stars Great Character
Reviewed in the United States on December 3, 2013
Verified Purchase
Harry Bosch is a true great character. I loved following him through his ups and downs in Michael Connelly's stories.
Read more
Helpful
Report abuse
See all reviews

Amazon Customer
5.0 out of 5 stars Perfect audio books
Reviewed in the United Kingdom on June 30, 2016
Verified Purchase
Unabridged audio books which I prefer infinitely to abridged version. Well narrated and three excellent stories; The Narrows and Echo Park are contenders for my favourite Michael Connelly books which is saying something,
Read more
Report abuse

Mr. L. F. Barry
4.0 out of 5 stars Four Stars
Reviewed in the United Kingdom on March 6, 2015
Verified Purchase
Very good product, arrived in very good time
Read more
Report abuse
See all reviews
Back to top
Get to Know Us
Make Money with Us
Amazon Payment Products
Let Us Help You
EnglishChoose a language for shopping. United StatesChoose a country/region for shopping.
© 1996-2022, Amazon.com, Inc. or its affiliates