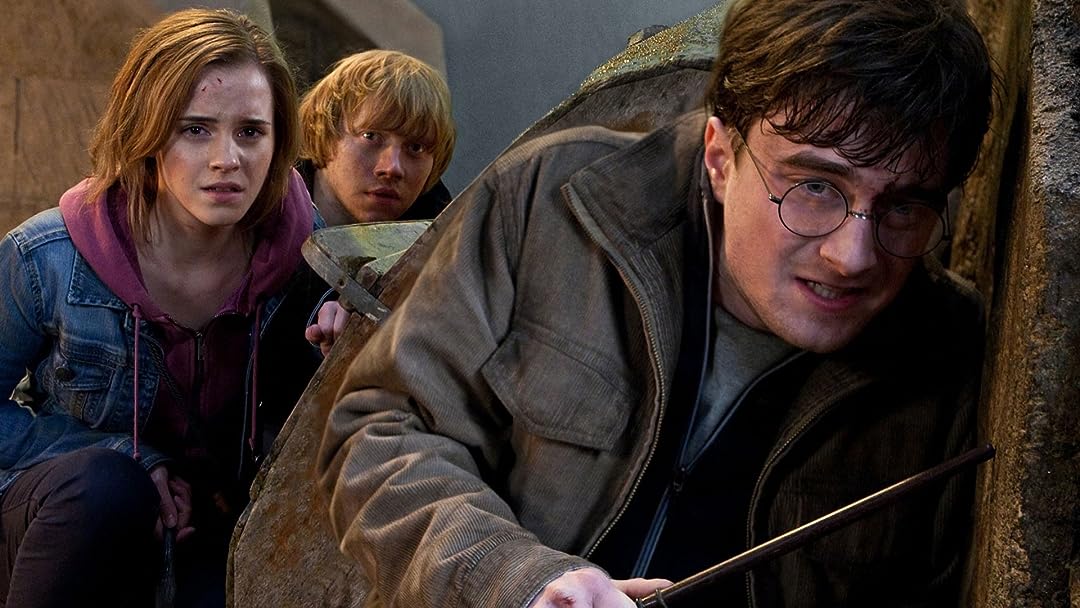 Amazon CustomerReviewed in the United States on September 21, 2016
5.0 out of 5 stars
Five Stars
Verified purchase279 people found this helpful

Coeta Ann SudderthReviewed in the United States on August 14, 2015
5.0 out of 5 stars
Great Finale of A Great Movie Series!
Verified purchase
Great flick! Well worth watching, as are all the Harry Potter movies. I am a 57 year old grandmother that is a huge Harry Potter fan. I'm sad that there were only 7 books and 8 movies and that it's over. I have seen this one at least 35-40 times. That ought to tell you how great I think it is. It wraps everything up, with a few surprises. The very last scene takes place 19 years later. I highly recommend this movie. If you have never seen any of the Harry Potter movies, here's an idea: You ought to rent them in order and get some good junk food and drink and have yourself a Potter marathon! A great weekend activity! Or, if you do not have a lot of time, you could stretch it out over 2 weekends.
50 people found this helpful

Amazon CustomerReviewed in the United States on April 19, 2020
3.0 out of 5 stars
its a great movie but....
Verified purchase
this is a great movie and I highly recommend .great for Harry Potter fans.(if you ask me I prefer the books but thats not what I'm getting to )

if your watching this off prime video on amazon THE VIDEO ON IT IS .SO .FREAKIN.BAD . >:(.
it gets pixilated to much and I can't see a thing but thats not because of the internet

so what I'm getting to is..
- the video is horrible and I can't see clearly 80% of the time
but the movie is great
and I highly recommend
I'm just saying its hard to see

sorry if that offended anyone

pema drolmaReviewed in the United States on February 1, 2018
4.0 out of 5 stars
This is a different version yet.
Verified purchase
How many versions/cuts are there of the Harry Potter series. I have seen at least 3 different ones. The one shown on ABC was so different. The disc I have is different yet. Makes me wonder how many takes it took for all the different versions. There various parts of the different ones that would make a very long, but very interesting film. The ending, part 7, is quite different from the others. Leaving out many scenes, but filling in with more action between V and H. Just interesting.
16 people found this helpful

ErinReviewed in the United States on August 30, 2020
1.0 out of 5 stars
How DARE they do that to the Battle of Hogwarts!!!
Verified purchase
Some of THE most epic scenes and comments happened at the Battle of Hogwarts in the BOOK. I am deeply disgusted at what happened here in the movie. Zero character development and everything, even the made up crap that they added for some stupid reason seemed to fly by in flashes of meaningless dialogue. Also, Daniel Radcliffe is the worst decision of the entire series. His acting peak was reached at the ripe old age of 12. He alone ruins the movies, but the script for this one in particular was utter garbage. I'm really disappointed. At least they let Molly Weasley have her day....the one silver lining.
4 people found this helpful

webhawk50Reviewed in the United States on September 29, 2013
4.0 out of 5 stars
Darkest of the series and a grand finish to an great franchise
Verified purchase
This final movie in the Harry Potter series is the darkest of all. It is the necessary and faithful conclusion to the wonderful writings of J.K. Rowling. There is little for me to criticize here except for one thing: something about the ending felt somehow very disengaged and somewhat unsatisfying. I am not quite smart enough to put my finger on exactly what that missing thing was, but I felt it. The ending seemed almost trite and devoid of the energy of the rest of the movies. I know it was authentic to the way that books ended, but as a movie, it seemed to need something else to bring it all to a satisfying conclusion. Yes, I know, it all concluded the way that the book did and the outcomes were the same. It was just the manner in which things were presented ON FILM that left me somewhat let down. Still, given that as my only criticism, the final movie in this franchise, was yet another piece of amazing film-making. Again, the actors were all superb. The set pieces were absolutely done with love and care and authenticity and lavish devotion to the Rowling books.

I've mentioned in a previous review of Part 1 that the 3D version of Hallows was way too dark to be enjoyable and that the 2D version was much better. The same holds true for Part 2 as well. For some reason, both 3D versions that I purchased from Amazon were way too dark and were not nearly as enjoyable of their 2D Blueray versions. I have not taken a star away from the movie for this reason, however, but rather for the somewhat disappointing way which the final film was concluded; it just didn't seem quite right. And yet I am at a loss to suggest a better way to handle the ending.

I highly recommend The Deathly Hallows Part 2 and it is, in the end, a superb finish to a superb movie franchise.
14 people found this helpful

Andreas H. KornerReviewed in the United States on September 12, 2018
5.0 out of 5 stars
Great 3D experience
Verified purchase
Everything has been said about the movie itself. I want to add that the 3D performance while not spectacular compared to other titles (i.e. Avatar) it is still great at adding a lot of depth to the scenes. We felt that this was drawing us more into the story and enhanced the experience greatly. I'll be purchasing part 1 too.
2 people found this helpful
See all reviews
Back to top
Get to Know Us
Make Money with Us
Amazon Payment Products
Let Us Help You
EnglishChoose a language for shopping. United StatesChoose a country/region for shopping.
© 1996-2022, Amazon.com, Inc. or its affiliates